"You can’t stop (learning) in this game because the defenses are always trying something new. In my case, I have to improvise quite a bit. It isn’t often that I am defensed one-on-one. You have to adjust your patterns from game to game, sometimes frequently during a game.” 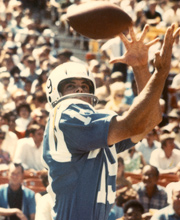 Al Davis was an assistant coach with the 1962 San Diego Chargers of the American Football League when he signed a flanker, Lance Alworth, to a contract after a spirited bidding battle with the National Football League’s San Francisco 49ers.

Davis recalls his feelings when he snagged this first big AFL prize of the budding inter-league war of the 1960s. "Lance Alworth was one of maybe three players in my lifetime who had what I would call ‘it.’ You could see right from the start that he was going to be a superstar."

Lance epitomized the glamorous, crowd-pleasing, deadly effective approach to football the Chargers exhibited in the early years of the AFL, enjoying nine exceptional years in San Diego before shifting to Dallas for a final two years with the 1971 and 1972 Cowboys. His patented leaping catches and blazing after-the-catch runs are legendary. Statistics many times are misleading, but in Alworth's case, they are not.

In 11 pro seasons, he caught 542 passes for 10,266 yards, an 18.9-yard average and 85 touchdowns. During his nine seasons with the Chargers, the graceful receiver averaged more than 50 catches and 1,000 yards per season.

He was named All-AFL seven consecutive years from 1963 to 1969 and played in the league's last seven All-Star games. He caught at least one pass in every AFL game he played, including a then-record 96 straight regular-season games and 105 in a row, if you count two AFL title games and seven All-Star appearances.

It seemed fitting that in 1978 he became the first AFL player to be elected to the Pro Football Hall of Fame. As Charley Hennigan, himself a great receiving star with the Houston Oilers, once said: "A player comes along once in a lifetime who alone is worth the price of admission. Lance Alworth was that player!" 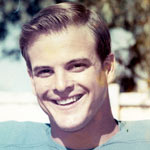 Thank you very much. It is truly an emotional and inspirational experience to be a member of the National Football League to come here to the Hall and to walk through its exhibits. To stand in the shadows of the great men whom we idolized as young people and in whose glory we all share, it brings a realization of the great debt we owe to them. And we leave here every year with a firm resolution that we will never forget that debt.

My life has been years of glory sprinkled with a few days of defeat, but today is a day of glory for me because it is a great honor to serve in this role. I have shared great moments in Lance Alworth’s life as well as his sharing great moments in my life.

In 1960, while the great National Football League prospered, a new league called the American Football League was formed -- dedicated to uphold the tremendous traditions of professional football that is so brilliantly espoused in this great Hall of Fame. We had a goal: We wanted to make our new, young league the finest in all professional football. We had money. We had fine, brilliant people, fine organization, coaches, scouts, small fan appeal, but above all we needed great players. In the struggle to sign great players, our league was most fortunate in January of 1962 at the Sugar Bowl under the goal posts to sign Lance Alworth for the San Diego Chargers. Lance Alworth said money was not a factor; I want to grow with the young league and the young team.

No one questioned Lance's being destined for greatness, for he was born with great physical talent. It was up to him to utilize this talent, and did he ever put it to use. Under the guidance of Sid Gillman, great coach and integrator, Lance with his exploits captured the imagination of football fans throughout the country and gave creditability to the new league with his wide-open, exciting football. Pro players in both leagues pointed to Lance as the best in his position. Being the first American Football League player, whom NFL people referred to as the point of comparison in judging athletes. In other words, "That kid is like Alworth."

The record books show that Lance Alworth was one of the most productive players of all times. He broke the great Don Hutson's record and caught at least one pass in 96 straight regular-season games. He was All-Pro seven straight seasons, played in seven All-Star games. At the twilight of his career, he joined the Dallas Cowboys and caught their first TD pass in their initial Super Bowl win over the Miami Dolphins. Lance complied these records against man-to-man, zone, combinations, bump-and-run coverages when few had ever seen those, double coverage, triple coverage, and he did it in the years rule-makers did not try to restrict the defense.

The records did not tell what really sets him apart. He was beloved by his teammates, and I know. He was honored by his foes, and I know. He was admired by the players because he had courage and he had an indomitable spirit and confidence and a killer instinct that made him the most feared player of our time. His career spanned 11 seasons, 1962-1973, and in 1966 the American Football League merged with the National Football League and under the great battle of the NFL both leagues went forward to become the most successful league in our professional sports.

I have a dream that someday I would have a stadium with 100, 200, 300,000 seats. That those seats would be filled with all those fans -- those great fans -- who watch the American football games in the early '60s in those nostalgic little stadiums. That the press box would be filled with the many splendid people who covered our games. And on the field of this stadium, I could go down memory lane and bring back all the great and special people who contributed any way, large or small, to the growth of the American Football League, the league we loved and have each of those special people be introduced and hear the roar of the crowd because it would be deafening.

Lance Alworth, the chills go through my body as I hear that roar and I think of all those special people. I can see the faces of many of them as if it were only yesterday. Some of those legendary heroes -- Lamar Hunt, George Blanda -- are here today. Some have become doctors, dentists, teachers, lawyers. Some are in sports, entertainment, Congress. Others are in less fortunate situations today, and sadly some have passed away. But I know wherever they are today, a sense of pride will swell in all of them, and Lance, because you come here today with credentials that have passed by few if any, you will enrich this Hall of Fame. You will be their standard there, the first American Football League player enshrined in the Hall.

You know, I guess after hearing that introduction that anyone is wondering now why I picked the AFL. Al Davis recruited me, and I did go to the AFL. In fact, he was a big reason why I did, and Al I want to thank you for those kind words today. They were really touching and at this point in time, it is hard to get words out. Thank you very much.

You know, what a way to end a career. It is fantastic, and I feel inside me a emotion I wish I could share with each and every one of you, something I can't describe. You know, standing up here the only thing I can say is I wish I could play a football game today and be in the shape I was in 5 or 6 years ago and maybe you would have seen a different Lance Alworth. There is so much here; it is tremendous, and I wish that my teammates and other people could share this with me.

Today I feel very humble with the company I am with. I feel very odd and I feel very, very proud to be included in this group of athletes. It is the most tremendous thing that has ever happened to me in my athletic career. I am just very happy about it. I want to thank football fans all over the country, I want to thank the people here in Canton and the people of the Hall of Fame. This weekend as been Football's Greatest Weekend for me and my family. I thank you for letting us partake in an experience we will never forget. I often heard that Canton is the Football Capital of the World, but I never believed it until today, but I do now.

I would like to thank Sid Gillman, who was like a father to me while I played at San Diego. I feel that many things I did were accomplished strictly by his design, because I feel that he is the master of coaches of all times, and my heart goes out to him today. I would like to thank my teammates of San Diego and my teammates at Dallas in the Super Bowl, which was probably the ultimate experience until today. This is the greatest thing in my life.

I want to thank my mom and dad, particularly, because they could share this honor with me. I thank the Hall of Fame for letting me come in as quickly as they did because I think I owe it all to my mom and dad for pushing me as hard as they did. Thanks, mom, dad. I would also want to say a special thanks to my wife, Marilyn, who finished up my career, but not because of that but because of the years afterward, which were probably the hardest years in my life and her life in making adjustments into a different world. I thank you for letting us stay together. I would like just to mention my children -- Lance Jr., Kelly, Brad, Greg and Rian -- and only parents can know what children mean to them. Thanks for being here this week.

But, most of all, I want to thank God for being here today. He made it all possible and my enshrinement today, I feel is a tribute to him. I want to thank Him for all He has given to Lance Alworth and I want God to know that Lance Alworth appreciates the many wonderful things He has done for him. One of these is the wonderful gifts of everlasting remembrance in the Hall of Fame and the game of football, the greatest game of all.