"The result you get from any endeavor depends upon the effort you put into it.” 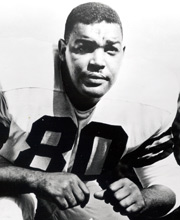 Len Ford joined the Los Angeles Dons of the All-America Football Conference (AAFC) in 1948 as a two-way end. He was excellent on defense and a favorite on offense with leaping, one-hand grabs that netted 67 receptions in two years.

When the AAFC disbanded after the 1949 season, Ford was placed in a special draft pool. The Cleveland Browns, who earmarked him for their defensive platoon, quickly grabbed him. It wasn't long before Ford was recognized as the very best of many stars on a unit that allowed the fewest points of any NFL team six of seven years in the 1951-1957 period.

Ford developed into such a devastating pass rusher that the Browns changed their whole defensive alignment to take advantage of his rare talents. By using the linebackers behind the two ends and a pair of tackles, Cleveland in effect created the first 4-3 defense. This enabled Ford to line up closer to the ball-handling action and have a better shot at enemy quarterbacks.

A serious injury almost ended Ford's career in his first NFL season. When hit by the elbow of Cardinals fullback Pat Harder, Ford suffered a broken nose, two fractured cheekbones and several lost teeth. Len was counted out for the season but plastic surgery, a strenuous rehabilitation program and the use of a specially designed face mask made it possible for Ford to return for the 1950 title game with the Los Angeles Rams. Len responded with one of his finest games to help Cleveland to a razor-thin 30-28 victory. Ford, who recovered 20 opponents' fumbles in nine NFL seasons, was a first- or second-team All-NFL pick seven times. He also played in four consecutive Pro Bowls. In the 1954 NFL championship game against Detroit, he intercepted two passes as the Browns buried the Lions, 56-10. 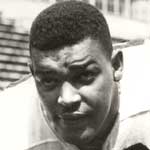 Other Members of Class of 1976: Ray Flaherty, Jim Taylor

Mr. Master of Ceremonies, honored guests and ladies and gentlemen. This will not be a speech at will, not by eulogy, it will not be an oration, it will be a story a simple story of a boy who dreamed a football instead of Cowboys and Indians. Len Ford came to the Armstrong high school in the District of Columbia, it's still down there on the Potomac around 1941, and in his three years there, the school enjoyed the greatest athletic bomb ever. That was made possible mainly through the efforts of Leonard Guy Ford, Jr. Len won nine letters in baseball, basketball and football. Upon graduation, he went from Morgan College, to Michigan And to the Cleveland Browns.

He's brilliant plays at those institutions and on that team, are so deeply edged into the history of football, that they need no further embarrassment or repetition. The records are there to be seen and read. I'm honored and deeply so, to have been chosen to present Leonard Guy Ford, Jr. but to us affectionately so. But then went his pro career and continued his brilliant plays. For nine years he was one of the greatest cogs in the great legendary machines, the Cleveland Browns. And so, though you are not mere embody, I know you are in spirit. So, wherever men gathered, be in a cow pasture or a stadium to lace on the cleated shoe, whenever the thud of the pigskin that goes through the crisp autumn air, whenever the sacking of the quarterback reverberates through the stadium, you would be there. You could not help it because it was in your blood. And now, Buck, here is your oldest daughter, the Apple of your eye, Miss Debora For.

First of all, I would like to begin by recognizing our family and friends who are here from Washington. I understand there are about four busloads of visitors, I would like to say hi to. I am proud and profoundly moved to witness the induction of my father Leonard Guy Ford, Jr. into the Pro Football Hall of Fame. He, of course, is very special to me and his family. I accept the honor which you accord with deep affection on their behalf.

Few are aware of the fact that my father saw actively the opportunity to compete with the best intercollegiate squads in the nation. After one year at Morgan State College in Baltimore, Maryland, with my grandmother's encouragement, he saw admission at five of the Big 10 schools.   His only reply came from the University of Michigan. Many of you are familiar with his career from that point.

A career that was guided by his lifelong philosophy “a winner never quits, and a quitter never wins.” It is perhaps significant that this induction ceremony will be a symbol which not only recognizes commitments to individual excellence but will encourage and rededicate to those principles that are fundamental to the nation strength and will inspire perseverance to achieve these principles in every access of our lives. May each of you make his or her contribution and find, as my father did, his special place in the sun. Again, I accept this honor on behalf of my grandparents, Mr. and Mrs. Leonard Guy Ford Sr., my aunt Anita Ford Allen, my uncle Clyde Ford, my sister, Anita and my mother, Mrs. Ford. except it also on behalf of his coaches Theodore McIntyre, Fritz Chrysler, and Paul Brown. His dear friend, Bob Mann and All of our friends around the country who know him affectionately as Lenny, and to my father who's longed for this day, “congratulations daddy, you made it.”