"If I were still coaching I’d still be stressing fundamentals. You’ve to block and tackle and play defense. It’s a specialist’s game now but it’s still a game of fundamentals. That’s how you win.” 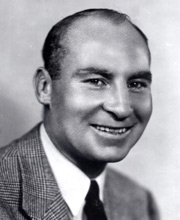 Ray Flaherty put himself squarely on the spot in one of his first public utterances after being named head coach of the Boston Redskins in 1936. On hearing of the signing of Wayne Millner, Ray wired his boss, George Preston Marshall: "With that big Yankee playing end, please accept my resignation if we do not win the championship this year!"

History shows, however, that while the Redskins did not win, neither did Flaherty resign. Instead he stayed on with the Redskins, who moved to Washington in 1937, for six more years. In all, he led the team to two NFL championships and four divisional titles.

He guided the Redskins during the period that the Chicago Bears dominated pro football. Yet, Flaherty's Redskins defeated the Bears two out of three times in NFL title showdowns. Two important football innovations are credited to Flaherty and each played an important role in his two NFL championships.

In 1937, Ray introduced the behind-the-line screen pass against the Bears. Redskins quarterback Sammy Baugh threw three touchdown passes against the unprepared Chicago defenses for a 28-21 victory. Later, Ray developed a 1940s version of the two-platoon system. Both units played both ways but one unit emphasized the passing offense while the second platoon featured the ground game. This substitution plan was particularly effective in the 1942 championship year, Ray's last season in Washington.

When Ray returned to civilian life after World War II, he opted to join the New York Yankees of the newly formed All-America Football Conference and there he won two straight divisional crowns. He closed out his coaching career in 1949 with the AAFC’s Chicago Hornets. For his entire coaching career, Ray's record shows 80 wins, 37 losses and five ties, for an excellent .676 lifetime winning percentage. Ray was also an outstanding end for nine seasons, most of them with the New York Giants, before he started coaching. 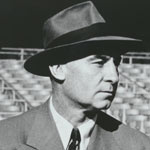 Other Members of Class of 1976: Len Ford, Jim Taylor

Ladies and gentlemen, Ray Flaherty attended Gonzaga University in his native Spokane, Washington. While attending school a classmate and close buddy of his was Bing Crosby and they remain close friends throughout the years.

Ray graduated in 1926 and joined the Charlie Powell Red Grange, New York Yankees star studded professional football team. He played and for them as he did in Gonzaga under his coach, Gus Duah. in 1929, Ray moved over to the polo grounds and played for the New York Giants. It was in 1933 the stout, ski loans, the head coach of the New York Giants, made Ray an assistant playing coach.

1934 came along and the Giants and bears were in the playoffs at the polo grounds on a real icy field. The Giants found themselves down 19-0 at the half. It was Ray's idea to put the Giants in tennis sneakers and they came out in the second half and got up 33 points winning the championship 33-10. since that day, some type of tennis shoe has been standard equipment with all Pro Football teams.

It was in 1936 that owner George Marshall of the Redskins was looking for someone to turn his team around, as it was just coming off of a two-win 10 loss season. He hired Ray and turned the team around he did in getting into the playoffs his first year. The second year, 1937, found Washington beating the Bears 28-21 in the World’s Championship. Ray got the skins back in the playoffs again in 1940 and in 1942 in Washington, DC, he beat the bears again 14-6 for his second World’s championship. After the 1942 season, Ray entered the US Navy and he didn't get back into Pro Football until 1946 when he became head coach of the New York Yankees of the new All-American Conference. Ray took that team, the 1946 and also the 1947 team to the playoffs. For that period of 12 years as assistant player coach and head coach, he was in the playoffs nine times and that's got to be some sort of a record.

I have known Ray Flaherty for a long, long time. As you heard, he played for me and coach with me and I tell you one thing, if you have ever tied up with him on a golf course or played gin rummy game get ready to play your best or you are going to get beat. And I want you folks here this morning to know, that I think this is one of the greatest men I have ever known, and I want you to meet Ray Flaherty.

Mr. toastmaster, ladies and gentlemen. I don’t have to tell you that I am very happy to be here today. But first I would like to thank the members of the selection committee for reaching down at the bottom of the barrel to pull out my name for this wonderful occasion. If it was not for them, I would not be here.

It was 50 years ago this summer that I played my first professional football squad. And I want to thank Mr. Earl Schreiber and the officers of the Hall of Fame and all the wonderful helpers that he has had in making our stained Canton so pleasant. I am most grateful to all the teammates I played with and all the wonderful players who played for me when I was coaching. They are also responsible for me being here today.

I want to thank Jim Barber for being my sponsor. He spent Seven years with the Redskins and was all league tackle. I believe he played up to his potential in each game more than any player on the team. He also kept the Great Lakes undefeated team of 1942 and was lined coach after the war. Since, T's had a very wonderful career in the sporting goods business and now the brokerage firm in Spokane. Last but not least, I want to thank the NFL for setting up and sponsoring football's greatest weekend and the enshrinement for the men who have given so much to this game. It must be the goal of all football players too someday complicated to be inducted. I spent about half of my adult life, 24 years, counting the three years I was in the service in World War II, playing and coaching professional football and I enjoyed every minute of it.

There were many disappointments and hours of glory. The game has advanced over the years and through TV has become the top spectator sport of all time. It is now the game of specialists and their ability and speed of these contestants of the Navy. In my day we played both ways and I believe we were well conditioned and better disciplined. The game is still fundamentally a game of motivation, blocking and tackling, with many more coaches and much better equipment and specialists of every position on defense and offense. They now present a spectacular performance. The game has grown in other ways. It has more problems that we had in our time period we had better relations with players and owners. I have been on both sides spending half of my life as a player and half as a coach. Today they spent too much time and too much money on lawyers and on court. I hope they will come to some understanding similar to the proposed agreement in baseball and that they have better relations.

There is plenty for everyone if it is properly distributed. I do think there must be some restrictions on players playing out their option and jumping from one club to another period already there is more unbalanced in the League than before. The strong are getting stronger and the weak are going downhill. Much money is extended on scouting, bonuses and if a team can only be sure of two years of service before player jumps to a better team for another bonus, the fans are not going to finance the cost of football tickets. Many of the teams losing their better players to the stronger teams will find the stands empty as they failed to win. There must be some compromise so this game will continue to grow and players for many years can continue to come here for this memorial occasion. If I had my choice of being anywhere on the earth today, I would want to be right here.