"I continually remind myself that the one thing I must be careful not to do is try too hard. When I relax, stay cool and think of what I have to do on every play I find things work out a whole lot better than getting sentimental or inspirational.” 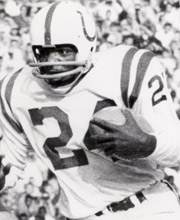 For almost a decade starting in the late 1950s, the Baltimore Colts were one of the National Football League's premier teams. Flanker/halfback Lenny Moore was a major reason for the team’s successes. A Penn State product, Moore was a first-round draft pick of the Colts in 1956.

He was first used as a combination flanker and running back but his primary responsibility was to catch passes. Teaming with quarterback Johnny Unitas the two formed a terrific pass-catch combo that devastated the opposition for almost a dozen years.

In 1958, Lenny’s third season, the Colts marched to the NFL championship and Moore played a leading role, contributing 1,638 combined net yards, 938 of those on receptions, and 14 touchdowns. In the Colts’ overtime victory over the New York Giants in the title game, Moore grabbed five passes for 99 yards.

In 1962, Moore was moved inside to the running back’s slot fulltime instead of flanked outside. A series of injuries seemed to slow the fleet-footed back and caused him to miss a number of games the next two seasons. In 1963, Moore could play in only about half the team's games.

But Lenny bounced back magnificently in 1964 and enjoyed the finest season of his career, scoring 20 touchdowns. That year, one wire service picked him the Comeback Player of the Year and another named him the NFL's Most Valuable Player.

Thank you very much. It is a great honor for me to be here today being the only high school coach here to present a boy which I started with 25 years ago. Lenny Moore was a boy who was first class ever since he started. He talked about the things that are happening today because when Lenny started the show, some of the ability he had we talked about he knew he could go all the way. And today is all the way. He was first class as I said since he started. In his senior year at high school, Lenny scored 22 touchdowns but that is not the great thing about it. Only four of those touchdowns were less than 10 yards. All these touchdowns combined, he averaged 31 yards a carry for a touchdown. Now you have men today that are running to gain 100 yards, Lenny in his first year as a rookie with the Baltimore Colts made 185 yards, but only carried the ball 15 times. When he was back in Redding High School, he had one game against Lebanon High School where he ran 229 yards in 13 plays, which gives him over 17 yards a carry for a touchdown. If that is not first class, I don't know what is.

Lenny's jersey number was retired at Redding High School. He was inducted in Redding High School' s Football Hall of Fame. He went to Penn State. He broke all the records at Penn State. Some have since been broken by Lydell Mitchell of the Colts. From there on, Lenny, went on to the Colts and to show you he was first class, cause I know we don't have much time, Lenny Moore has won every honor that was given out in professional football. He won the Rookie of the Year award. He had a bad year, but he came back and won the Comeback Player of the Year award. He also won the Most Valuable Player Award and the last of a final step which anyone can go, is right here in the National Football League Hall of Fame. So, at this time I would like to have Lenny Moore, the enshrine for the Football Hall of Fame.

Thank you, Mr. Mayor, fellow enshrines, Board of Directors, honored guests and ladies and gentlemen. Very unique week for me, because as Andy said, it was very difficult turn my young days for me to have realized the pentacles one individual could possibly reach. You know as I look back and I reflect back over my football years and just basically a little simple guy from reading, Pennsylvania who didn't have pretty much a sense of direction where he was going; If it hadn't been for Andy Stopper giving me the guidance to influence me to go ahead and get my college education, I wouldn't be here today speaking to you. There are many, many things sell too many more this way and that way, but you know I have never looked on it that way.

I've always looked back and said who is responsible for these particular things. You heard it from Rosey, you heard it from Connor, you heard it from Lavelli and you hear it from me. This should be a lesson to a lot of you youngsters who may be sitting around here this evening and those of you who have the opportunity of listening in on the telecaster radio or wherever this is going. You know it all starts on the home front of my home front was built on solid backing. My mother, who died in 1958, is standing right here alongside of me and I was very emotional earlier when Rosey started mentioning his mother, I broke down, but I'm pretty strong now, I got it together because I know I have my mom right here beside me. My old man, unfortunately, wasn't able to come because he wasn't feeling too well, but the rest of my family is here. He made us all very, very proud people. I look around and I kind of think when you look at an audience like this, black people, why people, Mexican people, all kind of people together in a mix just for this one particular affair. You know this is the thing that renews your faith in human nature. Because sometimes you get out and you wonder where you are going and what is going on out there.

Well, I have learned an awful lot of things and being a football player period the beautiful things, the feelings of man and what it is among your fellowman and how you get along together and how you love each other. My fellow inductees, we are in love with each other since the day we arrived here. So I got here Thursday, some a little earlier, but we have been sweating this thing out since we have been here and the beautiful things we have been presented here. And we appreciate it. I want you to know you have made my brothers and sisters very, very proud people. You made my kids very proud of my wife a very proud person at me very proud also.