All-Pro selections as a tackle

"Kicking was something I did because I had the talent. I always considered myself a tackle.” 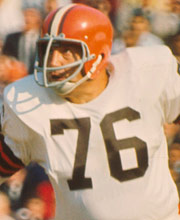 When Lou Groza retired after the 1967 season, it was truly the end of an unforgettable era for the Cleveland Browns. The last remaining member of the original 1946 Browns team, the big offensive tackle and placekicking artist played 21 years, more than any other pro player up to that time.

Many fans remember Groza primarily as a kicker, the first specialist who became so proficient that the Browns started thinking of making field goals, instead of touchdowns, when the going was rough and time was running short. Lou, who was one of pro football's finest offensive tackles, particularly in the middle years of his long tenure, preferred to think of himself first as a tackle who just happened to be the Browns' field-goal kicker because he “had the talent."

Groza was named first- or second-team all-league eight times during his career. In 1954, he was The Sporting News’ NFL Player of the Year. Nine times he was named to the Pro Bowl. Six times he was a starting tackle. In 1946, 33-man rosters prevented any team from carrying a specialist, but Groza was almost that, doing all of the kicking and playing on the scrimmage line only occasionally.

Late in his second season, Lou made "the first team" and he didn't give up that cherished status until 1959. He sat out the entire 1960 season with a back injury and then returned in 1961 at the age of 37 for seven more campaigns as a kicker only.

In 21 years, "The Toe," as he quickly became known, tallied 1,608 points and for years ranked as the all-time top scorer. His most dramatic kick came in the 1950 National Football League Championship Game, when his 16-yard field goal in the final seconds gave the Browns a 30-28 victory over the Los Angeles Rams. 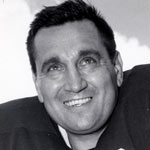 Drafted:  Signed as a rookie free agent by the Cleveland Browns (AAFC)

Thank you. Mr. Vice President and ladies and gentlemen. This is indeed a wonderful moment for me that my Louie would want me to share his big moment is very important. I notice that in newspapers he is lightened it by saying it is like going to football having. I don't know if I would go that far, but he has had quite a bit of help in that Department from father Connelly. And I would guess that father Connelly might have been my biggest rival for presenting Lou. This is no ordinary man. I have been in Association with him for 32 years period it started out as a player/ coach and over the years it has ripened into much more than that. He was a great football player--a tremendous offensive tackle with it. He enjoyed the way of life that goes with Pro Football.

He had a very difficult time bringing himself to give it up which serves to show you how he felt. I have said this before, he embodies more of what I value in the combination of football player, husband, father, son than any of them that I have had. I think it's worth the shows you about things went one of the first things he said when he found out he was elected to the Hall of Fame was isn't wonderful that my mother will get to see this. I could say this to you, that father Connelly convey to me that it came from all directions on our little network and we are all very happy because he belongs there and I might say to you that the three young men Up here qualify too. I know because I've had a few tussles with a couple of them and I know all about the other one. this is a wonderful class of 1974. And to Low may I say unto you other fellows, I'm honored to be in the Hall of Fame with the lights of you. I present to you…. Lou Groza

Thank you, Paul, Mr. Vice President, Mr. Mayor, Reverend Clergy and ladies and gentlemen. Really, I'm overwhelmed, and I am really going to find a little difficulty in expressing myself. But in coming here this day and when they started the parade and I saw the Martins Ferry Band who accompanied me in my segment of it and my family I was happy that they were able to participate in the caravan I thought I have come a long way, but I really haven't come too far geographically. And really Canton, Ohio, is really the center of my activities because from going up from Martins Ferry and playing my athletic career in Cleveland, Ohio, this is almost halfway, wake up  and this is going to be the center of my activity for a lot of years to come. But I do know that as I am here and these wonderful gentlemen that I've become acquainted with and met the presenters and their own families, I'm impressed with these fellows are great because they come from wonderful families and they too are good family men. I always wanted to be a good son to my own parents, and I wanted to be representative of a good family. I'm pleased that my mother is here and my wife and my children and really this is my life. This is what it is all about.

Any goals that I have set in my life has always been in regard to what is best for them. However, in being recognized in this way, I know I haven't accomplished this by myself. I just did what I enjoyed doing and people have helped me. In high school, I can remember the fine high school coaches that I had period the players that I played with that inspired me. We always had winning teams there And I can remember the first parade in Martins Ferry, Ohio, when I sat on top of a Fire Truck after we had one escape basketball tournament. And, we had a coach named Floyd Baker that really reminds me a lot of Paul Brown. And, some of the teachers there, I know Miss Napth is here and Bill Van Horne Who is one of the local newspaper fellows and he wrote us up and we would like to see it and it inspired us. Mr. Bowen Who is our athletic director and, of course, I have the ability to go ahead to Ohio State where Paul Brown invited me to join his team how thankful I was that he thought I was good enough to be a part of his football team. However, I couldn't come compete scholastically at college I had to go to the army for three years and there I really grew up. I learned the fundamentals of living because I was in the 96 Infantry Division and I went to Okinawa and when I got out of the service, I signed a professional football contract and I was part of Paul Brown's team for many years to come. And, there I learned not only that was football important but also the other things. And, the thing he taught me I think to hold myself out always as a good representative of Pro Football to be something that the youngsters would like to be themselves. And I didn't know always if I did accomplish that, but I did try to set a good example.

And, I hope that I've done it. I hope that I'm worthy of this particular honor. Is it humbles me that I'm joining a lot of great men, men I've met and that I've seen as a youngster and now I'm here with these fellows? This is just tremendous! And also, I can't help but think that in professional football had owners, Arthur McBride and Mr. Modell And I was friendly with all of them. And, they inspired me and encouraged me and when things got tough, they gave me a Pat on the back in to help me. And, of course, those things will value all my life. My future, the kicks I will get out of my future will be involved with my family. How happy am I that I have three of them coming to the same college and if you don't think that is going to keep your feet moving you have something else to think about?

I become involved in the Ashland community the community in which I live in the Berea, Ohio. I see a lot of those wonderful people here today, and I just want them to know how much I appreciate the friendship and too, I may have not become familiar with a lot of you fans, but really basically I think this is what makes a football player work, what makes him want to be good because he likes to hear you say nice going, to get that Pat on the back, but most of all writing up here in the parade today, I just can't tell you how overwhelming it was to hear the people clapping sometimes I wonder gee when something like this happens to you are you really man enough to say what you want to say so it is all encompassing. I don't think I have period but, I don't want you to know one thing. This is what memories are made of. Thanks for the memories.