"The ultimate of a football player is to enter the Hall of Fame. My dream came true.” 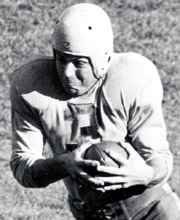 Tony Canadeo from little-known Gonzaga University was an unsung ninth-round choice of the Green Bay Packers in 1941 but it wasn't long before he earned the reputation of being a budding superstar who could – and would – do anything on a football field.

He played offense and defense, ran with the ball, threw passes, caught passes, returned punts and kickoffs, punted and intercepted passes. In 11 years, he rushed for 4,197 yards, passed for 1,642 yards, recorded 69 receptions for 579 yards, gained 513 yards on punt returns, 1,736 on kickoff returns, and scored 186 points.

Altogether the versatile Canadeo gained 8,667 multi-purpose yards. Putting it another way, he accounted for almost 75 yards in each of the 116 games he played. Add to that, he also intercepted 9 passes and punted 45 times during his remarkable career. Green Bay from 1941 through 1944 was one of pro football's premiere football teams. During that period, Tony initially served as an understudy to veteran quarterback Cecil lsbell. Then in 1943, he became the Packers' No. 1 passer. That year he was also named to the official All-NFL team. In 1945,World War II interrupted Canadeo's pro career.

When he returned from the Army in 1946, the Packers no longer were contenders and Canadeo’s role was significantly different. For his final seven seasons in the league, Tony became a heavy-duty running back and, predictably, came through with flying colors. In 1949, he became only the third player to rush for more than 1,000 yards in a season. He won All-NFL acclaim for a second time.

Small by pro standards, Canadeo was neither particularly fast nor elusive. Because he was prematurely gray, he was popularly known as "The Gray Ghost of Gonzaga." But Tony employed the attributes of most great athletes – determination, courage and tenacity – to attain Hall of Fame stature.

Vice president Ford, mayor, honored guests and all of you football fans out there. It certainly is a privilege to have this opportunity to be a part of one of the presenters for a terrific class who is going in in 1974. These are class gentlemen. It is my privilege to tell you about the Tony Canadeo who is a very unusual person with remarkable courage. Now, there are several sides of, Tony Canadeo And I would like to tell you about the first one which is the football player.  Canadeo What is an outstanding in a complete football player because he could block, he could pass, he could kick, but above all he was a tremendous runner. He graduated from Gonzaga University and while in college due to his feet he gave the nickname of the grey ghost of Gonzaga which carried through his Pro Football career and is affectionately known the same today. You know, Tony invented a very famous saying “the lookout block”. I don't know how many of you know what that is. But, when Tony was a halfback at Gonzaga, he had a guard who either had a good game or a bad game and when the guard would pull out and was a blocking back, and if he would miss the block he would yell back to the ball carrier “lookout”. But, after graduating he was drafted by the Green Bay Packers of Curly Lambeau. Tony played with Green Bay from 1941 until 43 and then served in the United States army in 1944 and 45. After that, he came back to Green Bay and played with the Green Bay Packers from 1946 through 1952. Therefore, Tony played eleven hard football years for the Green Bay Packers and he has contributed greatly to the history and to Pro Football to help it grow to be the game of what it is today.

And, I can't help but say this, the fact that he played long enough to qualify for the players pension plan--The players today do not think that players of this area have contributed enough to the game to qualify or be included in their pension plan, but, Tony went on to make the all pro teams of 1943 and 49. He ranked number 18 in the all-time receivers book at Green Bay and  number 16 in the all-time scores record book and he is the number two all-time leading rusher in the Packer history which is a class of its own. But he was the first Packer to gain 1000 yards in one year and he was the 3rd in National Football League history to do this. Tony did this in 1949. He gained 1052 yards for 208 carries for an average of 5.1 yards. Now, he did this with a schedule that consisted of 12 games. This year the Packers won two games and lost 10. So, you can't say that he accomplished this with a winning ball club. I checked out several quotes through that year on Tony and we don't have time to go through them, but I would very much like to give you a quote that was given and made by Greasy Neale the coach of the Philadelphia Eagles after the Packers played the Eagles. And, it sums up Tony as a football player and it says, “he doesn't have great speed, he's not tricky, but he's very quick and most of all he is all heart. Now, the second phase of Tony Canadeo, of course, is the businessman. In the business world he didn't expect to start as chairman of the board, but he used his reputation wisely with his Contacts and as the result today has developed a tremendous business in his own sales representing a large steel corporation.

But, more important, since 1955, Kia served on the Green Bay executive committee. Now, you can imagine in such a committee and an operation as it is today there are a lot of tough decisions to be made. And, being a former player, Tony has always been able to bring in the thinking of the player to help the player and this in itself has helped this executive committee to make some very good decisions. Decisions which frankly have contributed to the great part of the success of the Green Bay Packers throughout the years. Tony is proud today for another reason. Because he's going to join a close friend of his in mind in the Hall of Fame and that is Vince Lombardi. Most of you either have had the privilege of knowing Lombardi or of knowing him from reading about him. Now, can you imagine what it was like to have two volatile Italians particularly like these two--most strong character in a discussion which didn't turn into an argument. As quick as Vince was to challenge so was Tony Canadeo. But Vince use ticket Tony because Tony played quite a while before Vince came to Green Bay and he used to kid him as to whether or not he thought he could play today. Whether he was good enough to play today or in this argument went on maybe a year and 1/2 or two years or so. And finally, my volatile Italian couldn't stand it anymore and he said to the other volatile Italian and he said, “look coach, which way do you want me to go offensive or defensive. Ill do it.” Now, those of us who have watched Tony play there is absolutely no question that with his ability and his desire, and his art he could have played either way today. Now, for the third side of Tony Canadeo--the man. She is a beautiful person and a courageous human being. Tony is totally dedicated to a wonderful family. He has a wonderful sense of humor. But Tony has had his ups and downs and he has his adversities. very recently he had a cataract operation.

He is in the process of recovering from that and I'm happy to say that it appears to be very successful. About two years ago Tony was playing the toughest game of his life. It was a deadly game--one in which his very life depended upon it. Twice weekly he had to make visits to a Milwaukee hospital for the personal administration of a kidney machine. Both his kidneys had failed him. But eventually he overcame this and with the courage he had and with the tremendous courage that one of his sons had who offered and gave his kidney to Tony. When I mention Bob, I want you to know that Tony has three sons and every one of the three sons offered a kidney. Therefore, this is a resume of a man—Tony Canadeo Who is being inducted today into the Hall of Fame and while he feels greatly honored. I can say that he will be and is a tremendous addition and a credit to the Pro Football Hall of Fame. Tony Canadeo.

Mr. President, Mr. Mayor and ladies and gentlemen. If you want to know the definition of friendship, you have just had it. I know that this has been said before, but I say it again. This is the greatest day of my life because it is the greatest thrill of my life. All football, professional football, players dream of one day getting into the Hall of Fame. My dream came true and I share it with my former teammates and all Green Bay Packers fans because it partly is theirs. I come here today to thank you period to thank football and God for this great honor and this great moment. I'm proud, not only for myself, but for my family who are here today to share this honor with me. I'm proud for the school I attended--Gonzaga University.

I am proud for their many other things. I wish to thank, and I emphasize this one. I wish to thank Dan Olejniczak And the Green Bay Corporation for giving me the chance to play professional football in Green Bay. And, I wish to also say that it is a great honor for me to be another Packer going into the Hall of Fame. I am proud to have had the privilege of playing under curly Lambeau, Gene Ronzani, and you have been a friend of Vince Lombardi. And, I will always have the fondest memories of going into this Hall of Fame with three great football players—Night Train Lane, Lou, and Bill. And I say to you people in this area, this is one great football town and area and I shall always remember the four days that I have spent here. But I said thank you for your hospitality, for your kindness and most of all your friendship. Thank you.