"My whole game was beating the man in front of me…it was a matter of studying the opponent as well as you can and knowing the tendencies. You had to have the speed, agility and quickness to get the job done.” 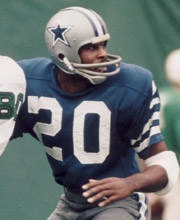 Mel Renfro excelled as a blue-chip defensive back for the Dallas Cowboys from 1964 to 1977. The 6-0, 190-pounder, who had been an All-American halfback as well as an outstanding track star at the University of Oregon, was the Cowboys’ second-round pick in the 1964 NFL Draft.

He began his career at safety but switched to cornerback in his fifth season. It was as cornerback that he enjoyed his greatest success in the NFL. During his first three seasons, Renfro also excelled as a punt and kickoff return specialist.

Renfro, who was born December 30, 1941, in Houston, Texas, had a spectacular rookie season in 1964. He led the Cowboys with seven interceptions, topped the NFL in both punt return and kickoff return yardage and culminated his great campaign with an invitation to the Pro Bowl.

In his career, he scored six touchdowns, three on interceptions, one on a punt return and two on kickoff runbacks. Renfro played in eight NFL/NFC championship games and four Super Bowls. His interception set up the Cowboys winning touchdown in a 17-10 win over the San Francisco 49ers in the 1970 NFC title game. He retired after Super Bowl XII.

Thank you very much. My congratulations to all the recipients who will be joining Mel Renfro, who is being inducted into the Pro Football Hall of Fame. Of course, when I came, I thought I was just coming to induct him in here. I didn't know I was coming for a Redskin pep rally, but we had a lot of fun together though you have to admit. One of the pleasures of coaching to me is to have the privilege of coaching a player of Mel's outstanding ability. You could place Mel Renfro in any skilled position on a football field and you would have a Pro Bowl player.

He was born in Houston Texas, which makes him a little special. He and his family eventually moved to Portland, Oregon, where he enjoyed outstanding athletic success both in football and track at Jefferson High School. He was a two-time high school All-America. In one track meet, he collected 31 1/2 points with victories in the broad jump, high jump, the low hurdles, and the leg on the winning relay team. And that defeated all the rest of the teams except one in the race.

Thank you very much, Coach Landry. I would like to congratulate the other inductees. It really is a great honor to be standing here with all of these fine men. I can honestly say that I wasn't sure that this day would ever arrive. I was eligible for 14 years. When each year went by, my friends would say, "You'll make it next year, Mel." Now I have made it at the last second, and I am so very thankful.

I must tell you this seems to have happened to me before, in the early years of the Dallas Cowboys. In 1967, 1968 and 1969 we lost to Green Bay twice, then the Cleveland Browns, in championship games. I remember those long, lean years. We were always labeled as "next year's champions." And there were times when we couldn't even venture out of our homes. We couldn't even go to a grocery store. Somebody would recognize us, and we would hear those snide remarks. "Those so-and-so Cowboys can't win anything, can't win the big game, always losing." Our kids at school would get it. It was a tough time. In 1970, we finally won the big game to get us into the Super Bowl, but we lost to Baltimore on a last-second field goal by Jim O'Brien. It was heartbreaking. Then the next year we finally, finally came back to win it all. That championship involved a lot of hard work. A lot of blood, sweat, and a lot of tears. The credit then belonged to my teammates and my coaches. The credit today belongs to my parents, my teachers, my coaches, my teammates, my family and my friends.

As a child, I was fortunate. My parents grounded me in the church. They taught me right from wrong, and they taught me to believe in the Ten Commandments. There were many other people who were inspirational to me along the way. I remember my fifth-grade schoolteacher, Mrs. Honeywell. She pulled me aside when I was 10 years old and she said, "I see something special in you Melvin. One day you are going to be someone." I didn't know what she meant. Oh, I knew I could run a little faster than some of the other kids, but she saw in me a vision. A vision of a professional athlete. She encouraged me to stay on the right path. I never heard from her or saw her again after grade school. One thing I want to say to her today is thank you. Thank you. And Mrs. Honeywell, if you are out there, please call me. I took her words to heart, and I stuck with athletics.

Torn DiSilvia was my football coach for four years in high school. We were 34-1. He was like a second father to me. I remember his great halftime speech. He simply said, "Go out, reach down as far as you can reach. Block and tackle and have fun." I went on to college. My football coach was Len Casanova. He helped us as much off the field as on the field. Teaching us solid work ethics, encouraging us to do things we need to do to be men. And what can you say about Coach Landry that hasn't already been said. A fine Christian man. He was able to blend and work well in dealing with a secular organization and secular players. Tom Landry is a great teacher. We soon came to realize that if we had faith in him, played where he wanted us to play, did what he wanted us to do, that we would be successful. In retrospect, many years later as I was reading the scripture, I saw Coach Landry's methods. All the time he was training and teaching, he was doing it from principles in the Bible. He was never threatening. And he never mentioned Christian principles or beliefs, but that is what it was. I know it now. I thank God for all these wonderful people who touched me throughout my life, and I thank them, too.

I grew up in the inner city in Portland Oregon. I lived on the edge of the city where blacks were situated. I witnessed racial problems there when I was growing up, but it wasn't as bad as a lot of places. When I went to play for the Cowboys, I kept going back to Portland. I saw the community continue to deteriorate year after year when I always thought it would get better. By the time I retired from the National Football League, it was just not the same -- drugs and the like. At the time, I tried to find a way to help my community, but I couldn't find anyone to help me. And I didn't know how to do it myself. I couldn't get it done. I wasn't ready. So, I wandered. Depressed and frustrated, I wandered. I went to St. Louis for a year or two. I went to Los Angeles for a year or two. I went to Las Vegas for a year or two. All the time I was thinking about Portland, and something would always draw me back home. Well, now I am trying to do something for the youth of this nation. After all, they are our future. When the governments and schools can't cope, it is time for the rest of us to pitch in. Athletes need to be role models. We need to present an image to people who want to do the right thing. Devoted to family, community, church. To live honorable lives with ethics, integrity, with grace.

In Genesis 3:9, the Lord called to the man, "Where are you?" The man was always running, ducking and hiding. In Hebrews 11 and 12, they called them great men of faith. They went through many trials. Samson, even Moses, tried to get away from what God wanted them to do. They doubted. Jonah, he wandered. It took them a long time to be elevated to do the Lord's work. They thought they were ready sooner, but they weren't.

God taught them. Gave them the lessons to wait, to be patient, to learn, and their time would come. And that is what has happened to me after I retired from football. I was carrying a lot of baggage. I just wandered. But the Lord was calling, "Where are you?" God had timing for me. It was as if God was saying, "You will make it next year, Mel." You see, it all kind of fits. Go back to the Super Bowl after awhile away. Go back home after awhile away. Go back to religion after awhile away. And now, back to the NFL after awhile away. I feel now that I am ready. I wasn't ready before. It wasn't time, but it is now. And now here I am. I can't tell you how much this means to me. The glory and the credit are not mine today. The glory belongs to God. The credit belongs to my parents, teachers, coaches, my teammates, my family and my friends. Go back after a while away and give back. Thank you very much.