"There’s more to winning than just wanting to. You have to prove yourself every Sunday. Just throwing your helmet on the field doesn’t scare anyone. There’s no more empty feeling in the world than losing.” 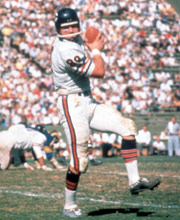 Mike Ditka, the No. 1 draft pick of the Chicago Bears in 1961, introduced a new dimension to the tight end position that once was viewed primarily as an assignment for a tough, talented blocker. Ditka proved to be a superior blocker, but he also became one of the first tight ends to catch a large number of passes.

He startled opponent defenses with 56 catches for 1,076 yards and 12 touchdowns in his Rookie of the Year campaign in 1961. Three years later, he had 75 receptions, a season record for tight ends that lasted until 1980 and the era of the 16-game season. The 6-3, 225-pound native of Carnegie, Pennsylvania, was a consensus All- American in 1960 while playing for the University of Pittsburgh.

He moved into the Bears' starting lineup at the beginning of his rookie season and didn't miss a start in 84 games with the Bears. He earned All-NFL honors four straight seasons from 1961 through 1964 and was a Pro Bowl choice after each of his first five seasons. He wound up his 12-year career with 427 receptions for 5,812 yards and 43 touchdowns.

At the time of his retirement after the 1972 season, he ranked second among all tight ends in receptions. In 1967, Ditka was traded to the Philadelphia Eagles. An injury in the second game that year aborted his consecutive-game streak at 86. He missed eight games in two years with the Eagles before moving on to the Dallas Cowboys in 1969. The fiercely determined and competitive Ditka regained much of his old form in four years in Dallas. His best campaign there was in 1971 when the Cowboys won their first Super Bowl championship. Ditka had 30 receptions that year and he scored the final touchdown in Dallas' 24-3 win over the Miami Dolphins in Super Bowl VI.

1970 NFC – Dallas Cowboys 17, San Francisco 49ers 10
Ditka played but did not start. He had one reception for five yards. 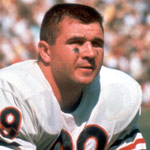 Drafted: 1st round (5th player overall) in 1961 by Chicago Bears. Also drafted in 1st round of the 1961 AFL Draft by the Houston Oilers.

Thank you very much. Before I start, I would like to thank Al Davis for warming you up for the proper manner. I offer my congratulations also to Jack, Alan and Fred. Great job done, gentlemen. Best of luck.

I stand before you today with a tremendous sense of pride to present to the Pro Football Hall of Fame my friend, "Iron" Mike Ditka. This great building that stands behind me was built on character, dedication, responsibility and ability, and no one exemplifies those characteristics better than Mike. When Mike first came to the Chicago Bears, he showed a level of intensity, a burning desire and a sense of dedication that all his fellow teammates admired. Mike's practice habits were something to behold. The games were played on Sunday, but as far as Mike was concerned, they could have been played on Tuesday, Wednesday or Thursday because Mike always gave that extra 10 percent that it takes to be a true champion and leader. To gain respect and to be a leader takes many efforts, and Mike accomplished that feat in one year. I know we are all proud to see Mike be the first tight end enshrined in the Professional Football Hall of Fame. Of course, I taught him everything he knows.

There are a couple of examples of Mike’s determination and ability that I would like to cite. In 1964, Mike caught 75 passes for the Chicago Bears, which in turn revolutionized the passing game of the NFL. Back then, a tight end was used mainly for blocking, but with Mike’s excellence a whole new look came to the offense through his, again, excellence as a pass receiver. Mike's size, 6'3", 235 pounds was a force to be reckoned with. To exemplify Mike's character, in 1963 the Bears were playing the Pittsburgh Steelers. We were in a critical-down situation in the fourth quarter. Mike caught a pass from Bill Wade and proceeded to run through and over seven Steeler defenders. If Mike had not made the incredible run, which experts have called one of the greatest runs in the history of football, we would not have won the World Championship in 1963. Through Mike's 12-year career, he was Rookie of the Year in 1961, he made the All-Pro team four times, went to the Pro Bowl five times and was also our team captain.

In closing, there was a gentleman by the name of George Halas who was the founding father of professional football. He said, ''When the history of professional football is finally written, Mike Ditka will go down as the greatest tight end that ever lived.'' On a personal note, Mike, I know our friend Bill George, God rest is soul, is looking down on you today with all the love and admiration.

May I present to you for induction into the National Football League Hall of Fame Class of 1988 ... Mike Ditka.

Thank you. Thank you very much. My good friend Ed O’Bradovich was very generous with his words.

Ladies and gentlemen, I do stand beside you, in front of you, today with a great sense of pride but a tremendous amount of humility. I didn’t know how hard this would be, but when I walked into this hall today and I saw these men behind us who were the forerunners of us coming into the hall this year, when I realize what Jack Ham and Fred Biletnikoff and my good friend Alan Page have accomplished in football, I am tremendously proud because it is a great honor. But I am terribly humbled by it all, because I am not sure I truly understand it. I appreciate you for your support.

I think the first thing, I made a mistake; I should have thanked God, because I have been fortunate, gang. He made me sound of mind and body and he has given me an opportunity to participate in the greatest game in the world for 27 years and that is pretty significant when you stop and think about it. And without him it wouldn't have happened in the first place. I want to thank my teammates because they put up with a lot of crap from me and they supported me most of the time. I want to thank my opposition; I don't think they ever understood me, but they really played hard against me and they really never asked any question or game any questions and I think that is important. I had so many great coaches. My high school coach Carl Aschman started everything. I had so many people who worked with me back then.

I went to Pitt. I got to know Coach Paterno very well, but I got to know a coach named Jack Wiley and Ernie Hefferle and John Michelosen, and then I went and saw Mr. Halas in Chicago and spent six years with him before I got to know a guy by the name of Joe Kuharich in Philadelphia for two years and finally ended up with the great Tom Landry in Dallas for four years. Now, if you think you are not blessed when you have people affect your life like that, I think you are sorely mistaken, and I guess I tested them all, but it worked out pretty good.

I want to thank the organizations, especially the Chicago Bears, the Philadelphia Eagles and Dallas Cowboys, for making my 27 years in football something special. I want to thank the NFL for what it stands for, for the men who played the game for what it really is. It is a tremendous thing, gang. I don't know any other way to put it. And as Fred told you, he loves the game and you've got to love it. It is just the greatest thing, the greatest feeling not being up here is the greatest. Being able to play every day, to practice every day, to be a part of it. To say that you played against Ray Nitschke, or you played against Doug Atkins or you knew Marion Motley. Any of this is what it is all about.

In life, many men have talent, but talent in itself is no accomplishment. Excellence in football and excellence in life is bred when men recognize their opportunities and then pursue them with a passion, and I think that sums up what the players of the National Football League and NFL Hall of Fame stand for. They recognize an opportunity and they went after it.

I have a lot of heroes in life, and one of my heroes is a man named Abraham Lincoln, and Lincoln had a little statement that he made about himself that I kind of think that it applies to me and I try to live by it. Don't always make it, but I try. And he made a simple statement that says this, he said, "I did the best I could. I did the best I knew how.” He said, "I mean to keep on doing it that way right up to the very end.'' He said, "If the end brings me out all right, then what is set against me will not matter.” He said, "But if the end brings me out all wrong'', he said, "10 angels swearing I was right would make no difference."

Again, thank you and God bless you.