"A big thing in pro football is emotion. You’ve got to go out and play with a tear in your eye. I never went on a football field when I didn’t think we would win.” 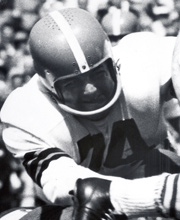 Mike McCormack, one of the game’s greatest offensive tackles, began his pro football career with the NFL’s 1951 New York Yanks where as a rookie he earned the starting right tackle spot. That year he earned the first of six trips to the Pro Bowl, before being called into military service.

The Baltimore Colts who acquired his rights before the start of the 1953 season, traded him to the Cleveland Browns in a massive 15-player deal. Even though the Browns knew Mike would not be available for a full year, he was the key man in the trade. Coach Paul Brown always considered it one of his wisest personnel moves.

In his first season in Cleveland, McCormack, a former University of Kansas star and Chicago native, was asked to fill the middle guard position that had been vacated by the retiring Bill Willis on the defensive unit. It was a tall order, considering Willis would himself be elected to the Hall of Fame. McCormack, not surprisingly, was up to the challenge.

He quickly became an important factor on an excellent Cleveland defensive team. Mike enjoyed perhaps his most memorable individual moment on the defensive team when, in the 1954 NFL Championship Game, he stole the ball from Detroit Lions quarterback Bobby Layne to set up one of the early touchdowns in a 56-10 Cleveland rout.

But it was as an offensive tackle that McCormack made his lasting mark in pro football. Mike was the Browns' offensive right tackle for eight years from 1955 through 1962. During that period, the Browns’ forward wall played a major role in assuring a balanced offensive approach and McCormack, equally adept as a blocker on rushing plays and as a quarterback protector, was a stabilizing factor throughout the period. 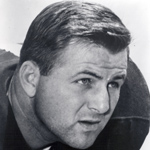 Chairman Jim and ladies and gentlemen. Would an honor and privilege I have been doing this and Mike I want to thank you for asking me to be your present your period I'm very familiar with this class that is being inducted today. We've had a shot at them one way or another over the years and they're all worthy. I think I would like to say to them that once you make the Hall of Fame it is something that they can never take away from you. This group is a little more bread and butter football players than usual, which I think is in order. In other words, the guys that you read and hear about are invariably the skilled position people. We have people here from the trenches, defensive backs and without them, their teammates, the fancy guys, the people you read about as household names are nothing and I think it is particularly gratifying for a man in the business to see some of the people go in here that are the bread and butter players.

I would like to say this to Ann McCormack and the children, with a happy day and you can be very, very proud of your man and your dad. He is one fine one. To talk about Mike McCormack as a football player, I would have to say very distinctly that he is going into the Hall of Fame because he was a great, great player. He was offensive lineman, but he played a couple of years as middle linebacker when we had needs. As an offensive lineman, I had taken the trouble of going down in my basement to dig up some of the things that went with him. I keep records of all the players I have ever had, and he played his last year at 254, he ran a 4-8-40 and, of course, he played offensive right tackle. He was a very intelligent, intense player.

He was our captain. I appoint the captains and 1 don't appoint them without good reasons. He was our leader and he earned every bit of the honors that are coming to him today. I think that this man exemplifies more of the things that I value in football than anybody I know, or I have had. He was a player on a team where we believed in team speed. Today it has become a bulk game, but in those days, it was for every man on the football team. I mean the Houston’s, the Gibrons, the Jim Ray Smiths, both tackles, Graza was the other one, he could run the 4- 8-40 too. And I still think we had a better game when we were doing it on that basis. The final upshot of this whole thing is each year I would keep a play book from one of the players I had year after year after year. It was always the playbook of the man who most exemplifies what I thought was the teams that would be most accurate and everything would be about as perfect as you could get it and with that in mind, l ravished down around my many little possessions and I find Mike's playbook and he was the one I had chosen to keep and it is 25 years old and I am going to give it to him, maybe he can sparkle up that Seahawk offensive a little bit. In all these years I have had this thing it really shows you what I thought about him ... he was special way back then.

He is a wonderful husband and father. Honest in everything he could do. He has gone up the ladder as the President of the Franchise. ways beyond what coaches usually succeed. I say to you this is a particular pleasure for me and again, Michael, thank you for picking me and again ladies and gentlemen, I give you for the presentation of the Hall of Fame, my guy, Mike McCormack.

Paul, I thank you so much for everything and I will be pleased to turn this book over to Chuck and the only thing wrong is I will not be able to let it down because you know we happen to be in the same division as how Davison now has been known to do some devious things. Al said his hero is George Allen. You know, it really is a great honor to be inducted into the Hall of Fame. It is a dream come true as Willie has said and to come in with this class, a class where Arnie Weinmeister as a young tackle in the league I had to face him three times period twice during the regular season and the home to home series and then in the Pro Bowl. I figured if I could get through that I couldn't do anything. I was very fortunate to be in Washington with Charley Taylor was there. What a great young man and fine receiver and there's a coach, an assistant coach, working on the offense trying to beat Willie Brown was extremely difficult so I am honored to be in this class with 1984.

To prepare for this moment you think about the things in your past, the nostalgic things. You get a lot of strange feelings and a lot of different feelings and so my feelings can be exemplified by lines from a poem that was found in Andersonville prison after the civil war. It said:

I feel that Mike McCormack is very similar to this that I was dealt an unlucky blow in my career by being drafted into the Army which turned out to be an extremely fortunate move. During that time, I was traded to the Cleveland Browns, a great organization. I joined a great team, many of whom you have honored, Otto Graham, Marion Motley, Lou Graze, Dante LaVelli, Lenny Ford, Jimmy Brown, Bobby Mitchell, some you will also probably honor in the future, Abe Gibron, Frank Gatski, Jim Ray Smith and Ge ne Ricker, just to name a few. I also was very fortunate to join a great coach, Paul Brown. Paul was my coach, was my guide, my motivator, my inspiration. A man who taught us all to strive to do the best we can. To always try to win and never best satisfied with defeat. Since I have retired as a player, I have come to know Paul as a friend, and I want to thank you for everything you have meant to us.

I would also wish that my parents were here, they are both at keys. I remember when I first started and I kind of a fat kid who loved the game of football and I would come home at night with the cramps, and they would rub my legs and get the cramps out of my legs and they would cover the scraps and the scars and help me along. I wish they were here to share this moment. I'm very pleased at my wife and my family are here. My wife, Ann, who has made a lot of sacrifices for me so her man could do his thing period my family, Michael, Tim and Molly and Colleen who went along with their father because this is what he wanted to do. and one of the sacrifices is one that she's always letting me know about, she said how would you like to take three kids under four to the Chicago O’hara airport and make the connection? Ann, I thank you and I love you.

Also, I would like to thank the people, the men who have really given us this arena, the arena of performers. Pete mentioned George Halas, but there are so many more. George, Bert Bell, Mr. Rooney, Paul, all these men who put forth a program for young men to achieve this moment by having fun at a game they love and it is a game I truly love and what you are looking at here is a product of a lot of hard work, a lot of love by my family, all my coaches and all my teammates and for this reason, I really believe that I am a very, very lucky man. Thank you very much.