"My job was not catching passes. My job was to stop the receiver from catching it. If I could have played 15 or 20 years without an interception, that would have been fine. Anything beyond stopping a receiver, that’s gravy.” 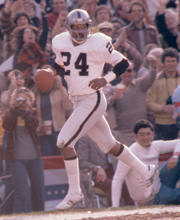 Willie Brown's career with the Denver Broncos and the Oakland Raiders spanned 16 seasons and 204 games from 1963 through 1978. Even though the Broncos were not successful on the playing field during Willie’s four years in Denver, the 6-1, 195-pound cornerback was already an established star by the time he was traded to the Raiders in 1967.

With a perpetually contending team in Oakland, Willie's outstanding abilities emerged into clear focus. During his 12 years in Oakland, the Raiders played in three AFL and six AFC championship games, as well as Super Bowls II and XI. Armed with speed, mobility, aggressiveness, determination and a keen football sense, Brown became a key figure in every Raider success and soon was widely acclaimed as one of the premier cornerbacks of all time.

Willie, who was born December 2, 1940, in Yazoo City, Mississippi, was an excellent end for four years at Grambling but was not drafted when his college career ended in 1963. He was signed by the Houston Oilers as a free agent but cut before the end of summer camp. He then went to Denver where he became a starter midway into his rookie season. A year later, he intercepted four passes against the New York Jets to tie an all-time individual record, won All-AFL honors, and played in his first AFL All-Star game, where he was named the outstanding defensive player.

Altogether, Brown was named to an all-league team seven years, three seasons as All-AFL and four more as All-NFL. He was named All-AFC four times. He also played in five AFL All-Star games and four Pro Bowls. During his career, he intercepted 54 passes, which he returned for 472 yards and two touchdowns. His biggest steal, however, came in Super Bowl XI, when he returned an interception 75 yards for a clinching touchdown. 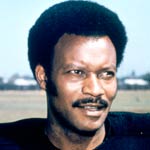 Drafted: Signed as a rookie free agent by the Houston Oilers

Willie Brown came to the pro football Denver Broncos in 1963 from Grambling University where his coach was the renowned and great Eddie Robinson. Willie was not only a great football player; he was senior class president. His playing career in the American Football League and the NFL spanned 16 seasons as a starting cornerback. Twelve of those magnificent playing years were with the Raiders, 1967 to 1978 where, in those years, the Raiders had the best records not only in pro football but also in all of sports. Ten of those years, Willie Brown was all pro. He was named the all-pro cornerback in the AFL. He played in each of the AFL's All-Star games and in tl1e first four AFC-NFC Pro Bowl games. He is the only player in pro football history who has intercepted at least one pass in each 16 consecutive seasons. He has been in four Super Bowls, two as a player two as a coach. He had 54 career interceptions.

He was born with great physical talent. It was up to Willie to put it to use and did he ever put it to use. I can remember like only yesterday, the first time I saw him play in 1963 and from then on, he created a style of play for cornerbacks that has been synonymous with excitement, dari11g a11d attack. It is called, jump and run pressure defense. Willie Brown has a special place in the hearts of the Raider organization and especially the teammates that wore the famous silver and black. He wore those colors with pride, he wore them with poise, and he wore them with class. He was a star among stars. Some of those great teammates of his are here today. The indestructible Jim Otto, the greatest center of the modern era and I would say that Willie Brown is the greatest cornerback of the modern era. The legendary George Blanda is here today the greatest clutch player the game as Evernote. Willie Brown was a great clutch player.

I would like to take you back a few years to playoff time, Super Bowl time, clutch time, 1970. Don Shula's Miami Dolphins are in the Oakland Coliseum, the Raiders hold a short leave late in the fourth quarter, the splendid Bob Griese back to throw, Willie Brown intercepted and ran 50 yards for a touchdown to break the game open. 1973, playoff time, the Pittsburgh Steelers are in the Colosseum, the great Terry Bradshaw back to throw, late in the third quarter, Willie Brown interception runs 55 yards for a TD. Let's go two 1977 with Super Bowl in Pasadena, California the Minnesota Vikings and Oakland Raiders, the great Fran Tarkenton Back to throw in the fourth quarter Willie Brown intercepts, run 75 yards for a TD which is still a Super Bowl record today.

His loyalties, devotion, dedication, still wreak the reward of victory. Willie Brown was an organization then, he played football for the organization, he wanted to win for the organization. As a player, he was a coach’s dream and that is why I when Willie Brown's career ended in 1978 when he no longer wore the famous silver and black #24, he was asked by the Raider organization to change his battle-scarred helmet today coaches cap. Another magnificent testimonial to his ability came in January 1984 at the Super Bowl, 130 million fans watch the second day of LA Raiders performed brilliantly and the written words after that game said Haines and Haines were the greatest pair of cornerbacks ever on one team and Willie Brown was their coach. Willie Brown was their inspiration. It was a reaffirmation of his style back in 1963. I will repeat myself... I had the pleasure of being at this podium before to Institute some of the great players whoever played in this great game and I've always said it is an emotional, inspirational experience to be a member of the NFL and come back here to this Hall and to walk through its exhibits to stand in the shadows of these great men whom we all idolize and who's Gloria we all share , this great class, Taylor, McCormack, Brown and Wenmesiter and others who have helped professional football so, brings the realization of the debt we owe to them and I can only say that we will never forget that debt.

Willie Brown, the magnificent horseman who delivered fear and interceptions upon all the great wide receivers of his time. Who for more than three decades and in the years to come will be the standard of excellence by which cornerbacks are judged? Only time, the great robber, beat Willie Brown at the corner, but time could not defeat him as the legend of Willie Brown will live on in this Camelot which is the National Football League's Hall of Fame and it gives me great pleasure to introduce to you the great Willie Brown. Thank you very much.

Thank you very much. You know, what can you say after all that? It is amazing when I was dealing with him for a contract, not all of this came up how great I was. For your information, I had in my contract a long time ago, I told him if I ever made the Hall of Fame he owed me one million dollars, so Al I guess this is the day and we will deal with it when we get back. You know Al is a unique guy, he takes the credit for a lot of things particularly the plan to get me to the Raiders. But the lady who is responsible for all this is Mrs. Carol Davis. she saw me play and she decided that she wanted me to come to Oakland and he does not take the credit for it, Mrs. Davis takes the credit for it. You know before he makes a decision, so the sports writers can get all this straight, before he makes any decision about personnel, he checks with Mrs. Davis. Now, if she says it's okay, then it's okay. Seriously, thank you Mr. Davis. I appreciate the opportunity to be here today and dear friends of football fans, this is the greatest day of my life.  Over the years in developing the Hall of Fame. Conveyor purses we are going to continue to appreciate the great welcome that we extend to us from the people of Canton, led by the mayor. And I want to thank the past hospitality extended to us in the civic minded Stanley Cmich. we certainly have appreciated him over the years.

Again, I would like to thank the people from Canton from greater Canton which today I guess includes about the whole United States except for the city of Los Angeles, but in any event, we appreciate what has been done. Later we are going to see the Seattle Tampa game right there in Fawcett stadium and someone will say tonight in Los Angeles, let the game begin.

Mr. Rozelle, This is the White House, the president would like to speak to you.