"Glory? No, there’s not much glory in it. But there is self-satisfaction and we have to do with that. When the newspapers say somebody ran 50 yards to a touchdown and they don’t tell who made the blocks, it hurts a little.” 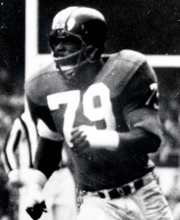 In the 1953 National Football League Draft, the New York Giants selected a 1952 Black All-America tackle from little-known Morgan State College in the 27th round. His name was Roosevelt Brown and his youth and relative inexperience were obvious when he joined the Giants for his first summer training camp.

But even in the very early stages, Giants coach Steve Owen liked what he saw in Brown – his 6-3, 255-pound size, his powerful arms, his trim 29-inch waistline, his willingness to work hard and his ability to learn. So Rosey Brown, a true “sleeper pick” got his chance to make the Giants squad and he made it big. Soon he was the starting left offensive tackle and it was a job he held for 13 years until he retired following the 1965 season.

Rosey was a classic pass blocker and, on running plays, he could make the blocks that opened gaping holes in the enemy ranks. And he could do something few tackles are called upon to do – pull and lead on wide ground plays such as a pitchout to the halfback.

During the height of Rosey's career, the Giants were enjoying an unusual string of successes with six divisional crowns and one NFL title in an eight-year stretch. While no one player can be credited with the Giants' great victory ride, Rosey deserves as much credit as anyone. For eight straight years, he was a virtually unanimous All-NFL choice and was named to nine Pro Bowls. In the 1956 NFL Championship Game, Rosey handled the vaunted Chicago Bears' defenses so well that he awarded Lineman of the Game honors. In 1975, Rosey Brown became only the second player to be elected to the Pro Football Hall of Fame on the merits of his offensive line play alone. 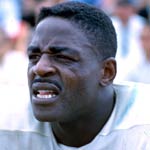 Thank you, Mr. Chairman. Gentlemen of the Board of Directors, distinguished enshrinees, fellow presenters, representatives of the Morgan State M Club, ladies and gentlemen.

It is my distinct privilege and high personal honor to be requested by enshrinee Roosevelt Brown to perform as his presenter on this auspicious occasion. It would be folly of me to rehearse the efforts made and the achievements of Roosevelt Brown on the rectangular field of play. I am sure he is already well known by you. Since time is of the essence, I will not permit a complete biographical resume of our honoree's life, may I request a few to indulge me for a few minutes as I attempt a panoramic sketch blocking in with broad scope only a significant event that fashioned this 1975 Hall of Fame inductee.

Roosevelt Brown Jr. affectionally referred to as Rosey, was born in the foothills of the Blue Ridge Mountains of the old dominion state, born there in the cradles of higher education, the University of Virginia. Born there in the city of fellowship, a recognized meca of southern hospitality. Rosey was a second born child of Mr. & Mrs. Rooselvet Brown, Sr. Rosey came into this world blessed with a christian heritage and a philosphy of life which began with love and respect. His application of these precepts gained for him the admiration of his teachers, his schoolmates, teammates and coaches of Flora Junior High School, Jefferson Senior High School and Morgan State College. Rosey' s first participation and extracurricular activities was as a member of the school's 63 niece band. This budding star was a lad of 14 years of age carrying 210 lbs of weight and standing 73'' in height. His instrument was a slide trumbone until the new coach, Robert Smith, arrived on the scene fresh out of Morgan State College. My research reveals that Coach Smith hijacked the giant musician and presented him with a full set of football gear.

It is coach Smith in Morgan '41 who has been commended for his superb guidance and leadership during the formative stages of Rosey's growth and development. It was Coach Smith who planted the seed of determination, courage and perseverance in the man who today is to be enshrined in the Pro Football Hall of Fame. It was coach Smith who watched the seed slowly emerge from their protective cover and then extend their shoots above the ground to rise to support a college and these of superior and showers of public acclaim. The Morgan alumnus completed his commission by placing Rosey on the southern railroad train #36 and set this protege to Morgan State College and placed him in the hands of Coach Eddie Hertz the master of packs and stats and referred to by the late Jessie Letticum, sports editor of the Baltimore Morning Sun, as the black Knute Rockne of the 30s, 40s and 50s for engineering a straight 64 game without a defeat marred only by six ties.

Rosey was seen at Morgan State as a football player, covered the pages of his Alma mater history with a luster that years will not dim, nor ages forget. My good friend, Jack Jason had said in describing an ideal football “the superior football must be agile, mobile, and hostile.” And I am here to tell you this afternoon that Rosey was that and then some. It is the greatest thrill of my 73 years of existence to be requested by Rosey to perform at this assembly today. I will ever hold dear fond memories of this occasion. And now, in keeping with the format of the Board of Selectors, I present the name of Roosevelt ''Rosey'' Brown, Jr. for enshrinement in the Pro Football Hall of Fame with all the like, privileges and opportunities there for that application.

Thank you very much Coach Hill. Members of the Board of Directors of the Hall of Fame, my good football friends that I have meant on and off the field, fine members and citizens of this community and members of the Hall of Fame who have stood here where I am standing with my knees shaking. I must say this is really an honor and a pleasure to be here this afternoon. I must say I had a little task to perform that I thought I would not make on last Tuesday of last month. I had to bury a good friend of mine. He was enshrined eight years ago, a fellow by the name of Emlen Tunnell, one of the greatest football players that I think had the opportunity to walk on the football field. We will all miss him. I know a lot of you didn't know him, but I knew him, a lot of people here knew him, our prayers are with him and will always be with him.

I started football a few years ago. God was good to me and put me here today. If it hadn't been for a person down in Virginia that of all people, I have had the opportunity to stand beside me today, would be my mother. She is not here I know, but she is looking down and is just as happy as I am or more. Beside me in this great game, she made me what I consider I am today. I was brought up along with mother and people like coach Hill, my family stuck by me that I was able to achieve something that I would like, and this is it.

In 1953 I went with the Giants. There God was really good to me. Because he sent me to a team that was number one as far as I was concerned. The Mara's, Well Mara. Tim Mara, Jack Mara his son, well they have all been like a family to me. I have been with that club for 23 years. I don't know any other way, because Jack Mara, my mother, coach Hill and my family taught me. My knees are getting a little weak and I want to sit down. But I just want to say one thing, does any ball player or football player who has listened to me this afternoon know that a lot of people out here especially in the Kansas area made this game as great as it is today.

Football, as far as I am concerned, is the number one sport. Football will always be the number one sport. Has any football players out there listened to me today? Treat this game good. Treat football good and it will be good to you. And this I know a lot of professional football players throughout the country, professional players that are playing for money. You can get out there and get beat and do your best. Football will be good to you if you be good to it. I am going to remember the Hall of Fame and thank you. To the people of Canton thank you very much for the way you treated my family and me over these three or four days that we have been here. To each and everyone here, thank you and God bless you.