"I was the luckiest guy who ever played football. I came along at the right time, under a great coach with a great team. Our only thought was to win for each other, for the glory of the team." 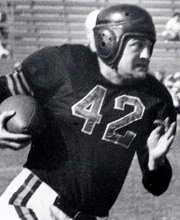 Sid Luckman, in his 12 seasons with the Chicago Bears, became the first successful T-formation quarterback. One game in Luckman's second season, the 1940 NFL title game, which saw the Bears defeat the Washington Redskins, 73-0, showcased the explosive possibilities of the T attack.  Almost immediately, many other pro teams began to adopt the new formation.

Bears’ owner and coach, George Halas, first presented Sid with a Bears T-formation playbook when he was practicing for the College All-Star game in 1939. Astonished and somewhat alarmed by the complexities of the new system, Sid was not an instant success. He fumbled frequently, had trouble with handoffs, and in general flunked his first T test. Halas shifted Luckman to halfback for a while before making another effort, which, on the second try, paid dividends.

Not all teams had the success with the T-formation that the Bears enjoyed. Chicago won four NFL championships, just missed a fifth, and Luckman was a major reason for the success. The crafty quarterback was named first- or second-team all-league from 1940 through 1948 and won the NFL’s Most Valuable Player honors in 1943.

Although Sid may be best remembered for the 73-0 victory over the Redskins, because the Bears went ahead so early in the game, he actually had to pass only six times, completing four for 102 yards and a touchdown.

Apparently, just the threat of Luckman and the T was enough to keep defenses off balance. Luckman had many more outstanding games but two, both in 1943, stand out above the rest. On November 14, Sid Luckman Day at the Polo Grounds, he passed for a record-tying seven touchdowns in a 56-7 win over the New York Giants. Later that year, in the championship game against the Redskins, he threw for 276 yards and five touchdowns in a 41-21 triumph.

Ladies and gentlemen. I'm greatly privileged and honored to be asked by Sid Luckman to make this presentation to him. He was one of the greatest of all T-formation quarterbacks. He created the pattern, perfected the moves, set the standard, was a standard that has not been topped as yet. Inborn in Sid Luckman was extraordinary courage and the gift of leadership to match that courage. Exacting in his demands on the men he commanded, he gave them more than he asked them to give. Quietly he provided a vital inspiration. For seven years number one quarterback of the Chicago Bears, directed them to four world titles. Now a most successful businessman, still a Bear at heart, and I’m happy to say, a good friend with my sincere congratulations and thank you kindly for having me.

Ladies and gentlemen. Thank you coach Little for the very kind and fine words you spoke about in talking about me. Words can’t express my sincere and deep appreciation to your coming here and giving of your valuable time. This is certainly one of the truly great honors of my life and one that I'll never forget. I also want to take this opportunity to thank coach George Halas and the Chicago Bears for all they have meant to me and what they have done for me and my family. Thank you very, very much and God bless each and every one of you. Thank you.