"I’m just tired of talking about the streak, I’m just glad I did it, glad for the attention, but it’s not that big a thing. I mean, I’m not bragging, but just going Sunday to Sunday, it will be a real rare game when I don’t catch a pass.” 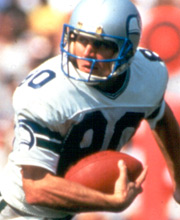 Steve Largent, a 5-11, 187-pound wide receiver with only average size and speed but armed with exceptional determination and concentration, became one of history's most outstanding pass catchers during his 14-season, 200-game career with the Seattle Seahawks from 1976 to 1989.

Largent attended the University of Tulsa, where he was an All-Missouri Valley Conference star with 103 receptions his final two seasons. He was the fourth-round pick of the Oilers and the 117th player taken in the 1976 National Football League Draft. He played only four preseason games with Houston before being traded to the expansion Seahawks for an eighth-round draft pick. It was the catch of the century for Seattle. Largent became an almost instant star with the Seahawks with 54 receptions, third best in the NFC, in his rookie season.

Seemingly indestructible, Steve missed only four games because of injuries his first 13 seasons. An NFL Man of the Year winner in 1988, Largent also was a positive force off the field. 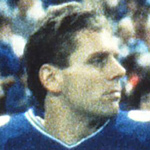 On behalf of the entire Seattle Seahawks organization I want to offer our congratulations to all of today's inductees and all the past enshrines here today.

Like a diving catch of a 40-yard Jim Zorn pass against the Cardinals in the Seahawks first ever game. Like the touchdown pass with a broken wrist he caught to beat Denver. Or the leaping catches literally over and around Lester Hayes to spark a win over the Raiders. Being the first on the practice field each day running imaginary pass routes with no quarterback and no defender.

Staying late after practice catching pass after pass from a ball machine. Staying and studying film long after everyone had gone. Or a dramatic tackle on Denver's Mike Hardin that still ranks as one of the most memorable hits in team history. The outpouring of love from his fans, teammates, and coaches when he broke the first of his many NFL records by catching a pass in 128 straight games on Monday night against San Diego. The countless hospital visits and inspiring telephone calls to young patients. The money, time, and effort to help local charities like Children's Hospital, The Spinabifida Foundation, focus on the family, and so many others. The tears the entire Seahawks family wept when first hearing that his son Kramer had been born with Spinabifida, but then we came to the realization that he was the luckiest young child in the world to be born into such a spiritual, loving, and caring family. In 1984 in a divisional game against Miami, the divisional playoff game, he had been shutout for fifty-eight minutes without a catch. Then he caught a sixteen yarder on third down from Dave Krieg. And then a forty yarder to the two-yard line and Curt Warner scored the winning touchdown with two minutes left to send the Seahawks to the AFC championship game. And in the locker room in Cincinnati after catching his 100th touchdown pass, presenting team broadcaster Pete Gross who was dying of cancer with his jersey. Most of all he will be remembered for his faith, leadership, spirit, dedication, integrity, and professionalism.

In 1976 when Steve drove along the highway from Houston to Oklahoma City after being cut by the Oilers, it looked like his professional career was over. before it had begun. But a magical fourteen-year detour in Seattle has brought him here to Canton Ohio where he belongs. Steve Largent has left a legacy not numbers, records and honors. Records and honors can be broken, but the spirit and standard he set will always, always live. Steve, I want to personally thank you for the honor of being able to present a great football player, a great humanitarian, but most of all a great husband and father. The Honorable United States Congressman from the state of Oklahoma, a Pro Football Hall of FaMer from Seattle, Steve Largent.

Thant you. This is a very special moment and it made more special by each of you participating here this morning and I want to thank you. Especially my family and friends who have made it very special for me. But I also want to thank the former enshrines seated to my right. I want you guys that from my heart that my career, the players that played in my era and the players that play today, we stood on your shoulders and we thank you for what you've done in creating this football game. The greatest sport in the world. Thank you. Thank each of you for honor of this moment. I want to share this honor equally with my wife, my best friend words could not adequately express or time allowed to say thank you to my wife Terry, thank you. You really have made every good thing possible in my life. I also want to thank my children Kyle, Kasey, Kelly, and Kramer that you guys are my most treasured possession, my most valuable trophies in my life. Thank each of you.

You know my most significant accomplishments have always come in the context of the team and I also want to thank my teammates in victory and defeat especially Jim Zorn and Dave Krieg, who are both here this afternoon. But I also want to share with you briefly this afternoon the message of my life.

My story like so many others is a story of mentors. People who challenged me when I questioned myself. People who believed in me against all the evidence. My mother, who never missed a game or never missed a practice. In fact, she talked me out of quitting football when I was a sophomore in high school. My grandfather who stepped into the gap when my folks were divorced. My coaches Jerry Rome, who rescued me off the waiver wire in 1976. Steve Moore, Chuck Knox, Jerry Potter, my high school coach who had the wisdom to demote me to wide receiver. They taught me the game of football and the meaning of leadership. When I close my eyes, I can still hear their voices, hear their whistles. They still shape my character and my life.

I was one of those players as you know who was labeled early as too small and too slow. I came to depend on people who saw me actually as bigger and faster than I really was. We all need people who believe in us. They expand the boundaries we place on our own lives. In my case, their influence did more than improve my performance in this great game. It filled a hollowness in my own life I could not explain or even understand. When a child grows up today without a father there is an empty place where someone must stand. Providing an example of character and confidence. If no one takes that place, a child can live in a shadow all their lives. Their emptiness is often filled with despair, by anger, or even violence. This commonplace tragedy has become the central problem of our society. It has become an epidemic of secret suffering. But if someone takes that place a child can escape the shadows. He can find confidence, courage, and conscience. And perhaps, even find his Tay to the Pro Football Hall of Fame.

I have the extraordinary respect for the men and women who except that responsibility and play that role in young lives today. They leave an influence more lasting than any law. The really heroic people are not those who break records. The really heroic people are those who can mend a broken spirit. My accomplishment today is a tribute to those people in my life who were willing to do that for me. Finally, I want to say that whatever favor I have gained is ultimately due to the God I serve. God's grace is particularly clear in life's great challenges and in life's great moments. This is one of those moments for me and I owe a debt of gratitude that is hopeless to repay. My faith is not a system of belief not code of honor. But a relationship with Jesus Christ, who provided his love and a lonely death. I could explore God's grace to me forever and never reach its depth and never find its limits. His blessing is the ultimate explanation for whatever is praiseworthy in my career and in my life. In football I found temporary achievements and lasting relationships that tested and shaped my character. I've seen the glory of this game. To be here in this place at this moment for this reason is an honor above all my expectations. I owe you my deepest thanks. Thank you.