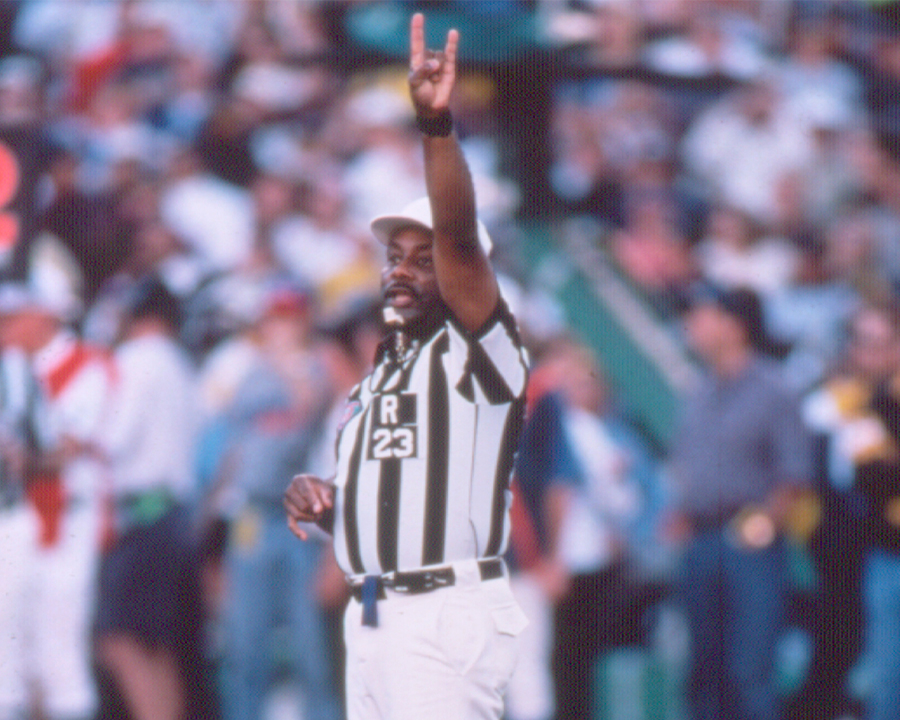 In August, Art McNally will be enshrined as the first on-field official elected to the Pro Football Hall of Fame in a ceremony scheduled for noon Aug. 6.

McNally served as an NFL official for nine years (Field Judge, 1959; Referee 1960-67) before being hired as the NFL’s Supervisor of Officials in 1968. He also was a teacher and coach in the School District of Philadelphia for 18 years before joining the league office.

“I couldn’t always be right, but I always tried to be honest,” McNally said in looking back on his career.

In professional sports, officials try to operate inconspicuously. They uphold the integrity of the game and try to make sure it is administered fairly.

McNally eventually headed a department of five individuals who coordinated and directed a staff of 112 game officials. He was responsible for the scouting, screening, hiring and grading of the crews that work each NFL game.

Under his leadership, in 1988, McNally made certain the NFL hired its first black referee when it elevated Johnny Grier.

“The referee is always picked out as the leader,” Grier told The Washington Post before the 1988 season. “If something goes wrong, it’s always ‘Blame it on (Jim) Tunney’s crew or (Pat) Haggerty’s crew,’ never the official who actually messes up … just the guy who is supposedly in charge. Hopefully, we won't have any problems like that.”

At the time of Grier’s promotion, the NFL’s 107 officials included only 11 Blacks, among them Burl Toler, the first Black official in the League. He served as a field judge and head linesman from 1965 to 1989.

McNally demonstrated a high level of respect for Grier and praised him.

“We felt very strongly about the job he had done for the past seven years,” McNally said. “Because of the type of person he is, we thought he could make the adjustment (from field judge to referee). We said, ‘He's the man for us.’”

Grier was born in Charlotte, N.C., on April 16, 1947. He began officiating varsity basketball scrimmages at his alma mater, Dunbar High School in Washington, D.C., at the age of 18 in 1965.

After graduating from the University of the District of Columbia, he joined the Air Force and was stationed in Shreveport, La. There, Grier picked up officiating football.

During his 24-year career, Grier worked 15 playoff games overall, eight as a referee.

His biggest assignment as a referee was the 1993 AFC Championship Game.

Grier's officiating career came to an end in 2004, when a leg injury forced him off the field. He would go on to work as an officiating supervisor for the NFL.

“I’ll put it this way,” Grier said. “Pioneer? If you mean that I'm the first Black referee, OK. Let's just say I'm the first Black that's been given the opportunity … If I can succeed, then fine, that's what I’m trying to do. And hopefully my success will lead to somebody coming behind me.”

Grier passed away this past Wednesday (March 9) at the age of 74.

He was a true pioneer who paved the way for the many who came after him. His legacy will be preserved in Canton at the Pro Football Hall of Fame.