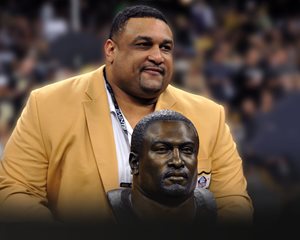 The Pro Football Hall of Fame is ready for the 2022 NFL playoffs, and the newest episode of "The Mission" is now available.

Throughout the '22 NFL season, the vision of "The Mission" podcast is to connect viewers and listeners with Hall of Famers, to help break down some of the league's primetime matchups, historical matchups and current news storylines, and to learn about the treasured life lessons the game of football has taught these gridiron warriors.

To help look ahead to the second round of the 2022 playoffs, joining "The Mission" is New Orleans Saints and Kanas City Chiefs legend WILLIE ROAF, a member of the Hall of Fame's Class of 2012.

The Saints drafted Roaf out of Louisiana Tech in the first round, eighth player overall, in the 1993 NFL Draft. He was the first offensive lineman selected in that year's draft.

After eight seasons with the Saints, he was traded to the Chiefs for a third-round draft pick.

Roaf earned All-Pro honors in three of the four seasons he played in Kanas City.

He was a key part of Kansas City's offensive line that helped the Chiefs lead the NFL in points scored in 2002 and 2003.

Listen as Roaf gives his predictions for this week's playoff picture and more!

Click here or watch below for the full podcast.

Gold Jacket Spotlight: Warren Moon called ‘a winner on and off the field’

This week’s Gold Jacket Spotlight shines on Warren Moon, a player who would highlight his talents to the non-believers, resulting in enshrinement into the Pro Football Hall of Fame in 2006.

Gold Jacket Spotlight: Bill Cowher ‘even looked like a Steeler’