"They’re (Games are) won first by preparation and second by desire.” 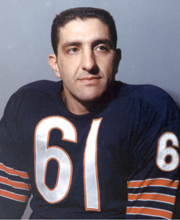 Bill George was the Chicago Bears’ second-round draft pick in 1951. He began his pro football career the following year as a middle guard in the then-standard five-man defensive front. Two years later, in a game against the Philadelphia Eagles, George made a now historic move that permanently changed defensive strategy in the National Football League.

On passing plays, George’s job was to bump the center and then drop back. George, noting the Eagles success at completing short passes just over his head, decided to skip the center bump and drop back immediately. Two plays later he caught the first of his 18 pro interceptions. While no one can swear which middle guard in a five-man line first dropped back to play middle linebacker and create the classic 4-3 defense, George is the most popular choice.

Certainly he was the first to star at the middle linebacker position. It was his ability to diagnose and react quickly that led the Bears to believe he could move that step or two backwards and become a super middle linebacker – a demanding position requiring sometimes pass rushing and sometimes pass defense, along with sure tackling, the speed to move from sideline to sideline, the agility to avoid blockers, and a keen sense of anticipation.

During the 1950’s and early 1960’s, the Bears were known for their outstanding defensive teams and George was a major part reason for their fame. A ferocious all-out player, he was named All-NFL choice eight times – seven consecutive seasons (1955-1961) and then an eighth in 1963 when he was the leader of the defensive that figured in the Bears 14-10 championship win over the New York Giants.

He was also selected to play in eight consecutive Pro Bowls, 1955-1962. In addition to his eighteen career interceptions, George also recovered nineteen fumbles, and in 1954 scored 25 points on thirteen PATs and four field goals.

Mr. Vice President, Mr. Mayor, commissioner, ladies and gentlemen. What are the qualities that make men great? I don’t know the answer to that question. But, in football they are considered to be ability, dedication, desire, and courage. When Bill George, an all-American tackle left Wake Forest and came to the Chicago Bears in 1952, he brought these qualities with him in abundance. He was installed as the bears middle guard in 1952 as all teams in those days played a five-man defensive front. He excelled in his position and continued there until one day in 1954 when the Bears were playing the Eagles he dropped back into the open area and intercepted the first of 18 career passes. By his innovative maneuver, Bill George changed the course of professional football.

A new position was born--middle linebacker. Bill continued as the Bears middle linebacker until one day in 1960 the San Francisco 49ers had been terrorizing the entire League. In fact, in the two weeks preceding the bears game, they had gained over 1000 yards with their bonded shotgun under the two leg of a true football genius Clark Shaughnessy. Bill George simply moved back into his old missleguard position, barreled past the center and dumped the 49ers quarterback time after time. That day in Rigley Field, the 49ers gained only 132 yards, and the “shotgun” as a total offensive weapon was contingence to the scrap heap. Bill George was a born leader. Coach Halas once said of that have George on the field is like having a coach in the lineup. Great athletes know the glory at times adversity is their lot. In 1962, Bill suffered a severed neck injury an automobile accident, yet although he was in terrific pain, he played the entire year at middle linebacker. In 1963, as captain of the Bears, he led them to the World Championship. In 1964—another bad year. A severe injury and he missed the last six games of the season.

In 1965, he played in only two games and in 1966 he finished his pro career playing 14 games for the Los Angeles Rams. In all, Bill George spent 15 years in the National Football League and in eight of those years he was an all pro selection. Equally important as his football ability are his two principle qualities--humility and generosity and more important than his football career is his ability to inspire the young people. My own children, no matter how cold or wet or tired or hungry never left the field until they had a glimpse of their hero until he emerged from the dressing room to be surrounded by an allegiance of youthful admirers. Of all the athletes I've known, Bill George I think knows best of all how to handle the fragile burden of the adulation of the young. My own debt to Bill is boundless. In the winter of 1966, he asked me to meet him privately and he told me in confidence at the year he would not be back with the Chicago Bears. he also told me of a rookie halfback who had just met his first year with the Bears. Since Bill would not be in Chicago, he asked me to keep my eye on this young man and tried to help him if I could.

And Bill described him as a very special person. How special he was! Little did I dream on that cold winter night in 1966 that just one year later I would be working full time for the bears serving as the liaison man between the owners and the coaches and the players. And Bill’s special person had become my friend. In fact, my son. His name was Brian Piccolo. Bill's mother is here today, and I know that she is very proud as is all his family--The Chicago Bear family.  In fact, all of these people who comprise professional football can be very proud of Bill George because he is a credit to all of us. It is a great privilege for me to present him for induction into the Pro Football Hall of Fame. Ladies and gentlemen--Bill George.

Thank you, Ed, Mr. Vice President, Mr. Mayor and all of you wonderful people of Canton. Truly this is the greatest honor and needless to say, the biggest thrill of my life was riding in the parade today. Never have I ever seen so many a gracious people. I just wish I could come back and do it all over again next year. About this honor5, it has been said many times before and I truly mean that the people I wish to share this with—first of all my family, my coaches, and my teammates because even though they have told me and I firmly believe it they are the ones that have truly put me here.

Football has been very, very good to me and I hopefully will someday will put back into football a particle of what I have taken out of it. Some day we can perhaps install back the same spirit that atone time we all believed in football. I’m certainly proud at this moment to be a part of the Pro Football Hall of Fame. I just hope that there is no way that they can take that away from me. I thank you very, very much.