The Texans took the field for the first time in the 2002 NFL season, and wasted little time making their mark.  Houston downed their cross-state rival Dallas Cowboys, 19-10, in the franchise's regular season opener at Reliant Stadium.  In doing so, it marked the first time that an expansion team won its opening game since the Minnesota Vikings' stunning upset of the Chicago Bears in 1961. The team won its first AFC South Division title in 2011 and on Jan. 7, 2012 with a 31-10 victory over the Cincinnati Bengals won their first postseason game. 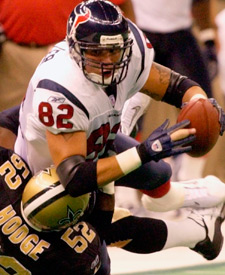 The Texans are quickly building a treasured history.

More on the Texans timeline>>>