The Jaguars have enjoyed significant success ever since joining the NFL in 1995.  Twice in their short history, the team has reached the AFC championship game.  In just their second season, Jacksonville qualified for the playoffs – the first of four straight post-season appearances – and advanced to the AFC championship game.  Three seasons later, in 1999, the team once again made it to the AFC title game.

The Jaguars have many great players and moments since first taking the field in 1995. 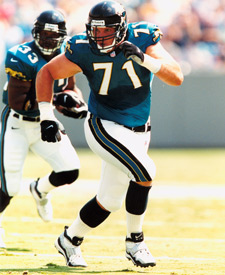