Appropriately, New Orleans was awarded a franchise on All Saints Day in 1966.  Despite not recording a winning record until their 21st season, the Saints have enjoyed a devoted fan base.  In the mid-1980s, Hall of Famer Jim Finks turned New Orleans into winners.  From 1987 to 1992, the team advanced to the playoffs four times and won the NFC Western Division in 1991. Finally, in 2009, the Saints reached the top of the football world with a victory in Super Bowl XLIV.

The Saints history has included a number of great players, coaches, and games. Many have been honored by being elected to the team's Hall of Fame. 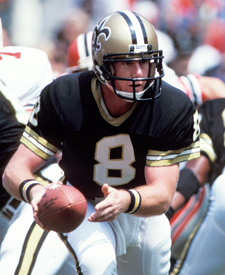 More about the Saints Hall of Fame.>>>