History Made in Super Bowl XLI 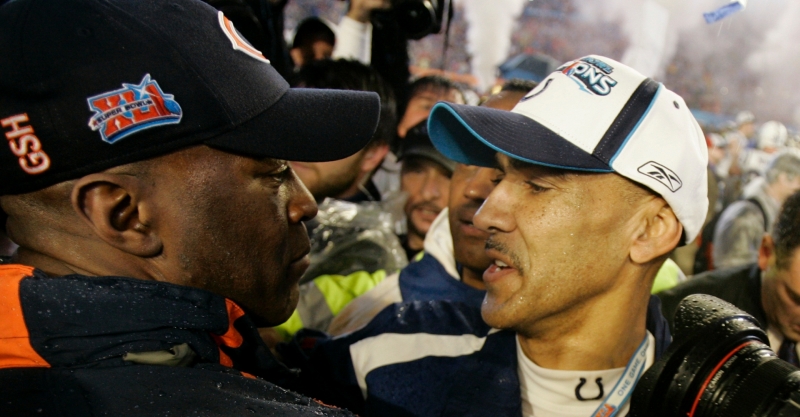 The Houston Texans hired Lovie Smith as their head coach last week after he served as their defensive coordinator and associate head coach this past season.

At 63 years old, this will be Smith’s third head coaching stint in the National Football League. He went 81-63 in nine seasons with the Chicago Bears and 8-24 in two years with the Tampa Bay Buccaneers.

“I don't know if there's a guy that looks like me that's had a chance to do that,” Smith, who is Black, said during his introductory news conference about getting a third chance to lead an NFL franchise.

In 1989, Art Shell became the first African American head coach in the NFL’s modern era when he was hired by the Los Angeles Raiders.

The Hall of Fame offensive tackle coached the Raiders for seven season (1989-1994, 2006) and compiled a 56-52 regular-season record. He led them to the postseason three times and won an AFC West Division title in 1990.

In 2003, Pittsburgh Steelers’ owner Dan Rooney chaired a committee to study the issue.

The result became known as “The Rooney Rule.” Teams were required to interview at least one minority candidate when filling a head coaching position – or be fined. In 2021, the NFL approved changes that now require teams to interview at least two external minority candidates for head coach and one for coordinator positions and certain executive positions.

Smith was in his third season at the helm of the Bears in 2006 and at 13-3 won his second NFC North title before defeating the New Orleans Saints in the NFC Championship Game.

Dungy guided the Colts to an AFC South Division title and capped the season with a thrilling 38-34 win over their archrival New England Patriots in the AFC Championship Game and a victory over the Smith’s Bears to become the first African American head coach to win a Super Bowl.

Now 16 years later, Smith will get another opportunity to lead a team back to the Super Bowl and this time walk away with a Lombardi Trophy.

“Play fast, play physical, take the ball away,” Briggs said. “A physical run game and a threat in the pass. Special teams will play a major factor in the success of the Texans. Every time his teams break, they break on ‘World Champs.’ Speak it into existence. Beat your rivals, win the AFC South, win the conference, World Champs. Big Sandy, Texas-style!”