Hugh McElhenny was to pro football in the 1950s and early 1960s what Elvis Presley was to rock and roll. Known as "The King" (McElhenny that is), he had it all.

In his prime, McElhenny was the scourge of the pro ranks. Considered the greatest "thrill runner" of his day, he ran with a tremendously long stride and high knee action. His breakaway speed and unique ability to change direction at will left defenders dazed and confused. 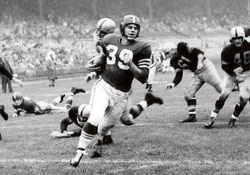 Like his long time San Francisco 49ers teammate and Hall of Fame fullback Joe Perry , McElhenny was a product of Compton, California Junior College. He followed up his one season at Compton with three touchdown filled years at the University of Washington where he rewrote the Pacific Coast Conference''s record book and earned All-America honors.

A first-round draft choice of the 49ers in 1952, Hugh was an instant hit. His rookie season left sportswriters groping for new superlatives. That year he recorded the season''s longest punt return (94 yards), the longest run from scrimmage (89 yards), and the top rushing average (7.0 yards per carry). Not surprisingly he was a unanimous choice for the league''s Rookie of the Year award. One organization even tabbed the rookie NFL Player of the Year.

From the 49ers'' standpoint, McElhenny''s outstanding rookie performance may have helped the team in an even more significant way. "When Hugh joined the 49ers in 1952," Lou Spadia, then general manager, recalled in the mid 1950s, "it was questionable whether our franchise could survive. McElhenny removed all doubts. That''s why we call him our franchise-saver."

In 1954, McElhenny again led the league in rushing average. It was also that season that the fullback John Henry Johnson joined the 49ers backfield. Together Johnson, Perry, McElhenny, and quarterback Y. A. Tittle formed the famed "Million Dollar Backfield." It is the only full-house backfield to have all four of its members enshrined in the Pro Football Hall of Fame. For three seasons the "Million Dollar Backfield" challenged opposing defenses with Tittle''s arm, the power of Perry and Johnson and the exciting elusiveness of "The King." Although Johnson left the 49ers for the Detroit Lions in 1954, the backfield of Tittle, Perry, and McElhenny remained in tact through the 1960 season.

In 1961, after nine seasons and five Pro Bowl appearances, McElhenny was sent to the expansion team Minnesota Vikings. It was, all things considered, his finest season. With the Vikings, McElhenny accounted for 1,067 combined yards and made his sixth trip to the Pro Bowl.

The thrill of playing on a championship team had eluded Hugh during his long tenure with the 49ers and Vikings. He would, however, achieve that goal in 1963 as a member of the New York Giants. "Hugh''s knees were already shot and I could use him only sparingly," Allie Sherman, at the time the Giants head coach, reported. "Still he made valuable contributions to our championship effort. We knew he would always give us his very best."

For McElhenny, giving his best was something he did automatically throughout his entire 13-year career. When he retired after the 1964 season, McElhenny was one of only three players to have gained more than 11,000 all-purpose yards. "The King''s" total production for rushing, receiving, kickoff returns, and punt returns was a majestic 11,369 yards.