(Note: Hall of Fame cornerback Mike Haynes has known James Lofton as both an opponent and as a teammate. Needless to say, he preferred it when they played on the same team – so much so, they were actually roommates with the Raiders. They will once again be on the same team beginning Aug. 3, when Lofton is inducted into the Pro Football Hall of Fame.)

James, when you came into the NFL in 1978, I knew you from your college days as more of a track and field phenomenon. You were a great track and field athlete and I remember you were considering competing in the Olympics. Coming into the National Football League, there was no question your speed and big-play ability would take you far. 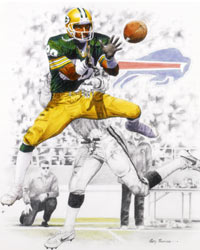 I’ve always enjoyed watching you run – a long strider, graceful and effortless runner. When I was with New England and you were starting out with the Packers, I got a chance to play against you, and got to see your skills up close. I saw it again when I was with the Raiders. An awful lot of film study went into my preparation for covering you!

The one thing you could really do was jump. I saw a lot of games where the quarterback was in trouble and he’d just throw it up there and you’d go get it. Seven out of 10 times, you probably came down with the catch.

I’ve always enjoyed going against real competitive players, guys who took a lot of pride in what they did. And you were definitely one of those players. We only faced each other twice as opponents, but I like the fact that I had a chance to play against you when you were coming up and building a name for yourself, then again after you were established as one of the best wide receivers in the league. I enjoyed playing against you both times.

You were one of those players who went hard right up to the last whistle, no matter what the score. And I have a great respect for those players.

Later in my career, I had the pleasure of playing with you as a teammate – actually, as a roommate. And that’s when I really got the chance to find out how smart you are, and how well you approach the game both physically and mentally. It was tough enough facing you those first two times. With the Raiders, I had to go against you every day in practice. That was no picnic.

I was proud to be there at the Pro Bowl when you married your lovely wife, Beverly. We’ve had a long, long relationship, first as an opponent and then as a teammate. And it’s great to be able to welcome you again as a teammate – this time on the greatest team of all time.

Congratulations, my man. It’s an honor that is well-deserved. Your commitment to the game and to attaining the level of success you wanted to achieve has been realized. Your name will forever be in the halls of the great shrine of football.