Pro Football Hall of Fame halfback Bill Dudley passed away early this morning. He was 88.

Nicknamed “Bullet Bill,” he was selected as the top pick in the 1942 National Football League Draft by the Pittsburgh Steelers. Dudley, who was enshrined into the Hall of Fame in 1966, is one of just 13 Pro Football Hall of Fame members to be drafted first overall. 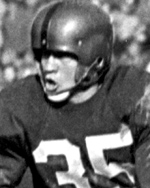 “We are deeply saddened to learn of Bill’s passing,” commented Hall of Fame President/Executive Director Steve Perry from South Florida where he’s preparing for the naming of the Hall’s Class of 2010. “Perhaps as much as his greatness on the football field, we will remember Bill as a great friend and a true ambassador for the Pro Football Hall of Fame and the sport he loved.”

“Bill never missed returning to the Hall of Fame each summer to welcome the new class of enshrinees. He truly appreciated being with the other members of this unique fraternity of football greats,” added Perry. “On behalf of all of the Pro Football Hall of Famers, our Board and staff, we extend our deepest sympathies to Bill’s wife Libba and their family at this difficult time.”

Although he didn’t possess world-class speed and his running style was described as “unorthodox,” Dudley was exceptionally effective during a nine-season Hall of Fame career split evenly with the Steelers, Detroit Lions, and Washington Redskins. Not only a lethal runner as a halfback, Dudley excelled as a kickoff returner and punt returner while also contributing as a defensive halfback.

After a spectacular career at the University of Virginia, Dudley made an immediate impact on the NFL gridiron during a rookie season in 1942 that saw him earn All-NFL honors. His football career was then interrupted with his service in World War II.

He returned to the NFL in 1945 and one year later had an incredible season that earned him the NFL’s Most Valuable Player Honor. Dudley won a rare “triple crown” when he led the NFL in three separate statistical categories – rushing, interceptions, and punt returns – in 1946

In all, Dudley amassed more than 8,200 combined yards, intercepted 23 passes, and scored 478 points. He also holds the unusual distinction of scoring nine different ways during his career.

In lieu of flowers, the family has requested donations be made to the Bill Dudley Scholarship Foundation. http://billdudleyscholarship.com/

In a special ceremony the day before Super Bowl XLIV, NFL Network announces the 2010 Pro Football Hall of Fame enshrinees.