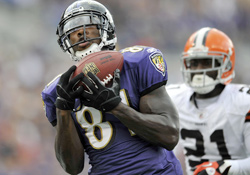 Anquan Boldin reached the 600-catch plateau when he added eight receptions for 142 yards and 3 TDs to his career total during the Baltimore Ravens’ 24-17 win over the Cleveland Browns on Sunday. No player in NFL history has reached 600 career receptions faster than Boldin who accomplished the milestone in just his 98th career game.

Boldin's pace of catching footballs began right out of the gate when he began his NFL career in record fashion. Drafted in the second round of the 2003 NFL Draft by the Arizona Cardinals, Boldin wasted no time adapting to the NFL style of play. He caught 10 passes for 217 yards in his pro debut against the Detroit Lions on Sept. 7, 2003. Success continued for him as he wrapped up his first pro season with an astonishing 101 catches which shattered the previous NFL record for receptions by a rookie.

Terry Glenn had owned the mark after he caught 90 passes during his rookie season with the New England Patriots in 1996. The most catches in a season by an NFL rookie prior to Glenn’s total were the 83 hauled in by Earl Cooper of the San Francisco 49ers in 1980.

Here's a review of Boldin's memorable rookie season with the Cardinals.

The Seahawk’s Leon Washington returned two kickoffs for touchdowns on Sunday. He is just the 10th player in NFL history to accomplish that feat.

Denver Broncos fans will celebrate the enshrinement of Floyd Little. He receives his Hall of Fame ring during a ceremony at Sunday’s game vs. the Colts in INVESCO Field at Mile High.