January of 1995 was a particularly good month for Steve Largent.  On January 4, the same day as his 20th wedding anniversary, he was sworn in as a member of the 104th Congress as the newly elected U.S. Representative from Oklahoma’s First Congressional District. A few weeks later on the 28th, he learned that he had been elected in his first year of eligibility to the Pro Football Hall of Fame.

Both his election to Congress and the Hall of Fame were testimony to the hard work, character and commitment to purpose that Largent epitomizes.  And, both are examples of successes that naysayers initially thought were long shots at best.

Because of his lack of political experience, Largent was described in 1994 political circles as an “unconventional” candidate.  That’s the kind of description you generally hear when some political pundit or party official is suggesting that a candidate’s chances are slim to be elected. That type of rhetoric didn’t deter Largent in the least, as he set out on the campaign trail espousing his heartfelt political convictions His lack of political experience didn’t deter voters either. In his successful bid for election he garnered more than 60 percent  of the vote.

Even the way in which Largent began his congressional service could be called “unconventional.” Shortly after his win at the polls, the Congressman-elect was appointed to fill the final days of a vacated seat before beginning his own term in January. 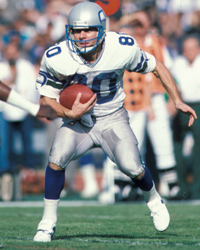 Largent was reelected three times before resigning in 2002 to run for Governor of Oklahoma. He was narrowly defeated in that race and his career as an elected public official came to a close. Today, he stays tightly connected to Washington in his role as President and CEO of CTIA-The Wireless Association, a lobby that represents the wireless communications industry.

Much like his route to the nation’s capital, Largent’s journey to Canton could also be described as “unconventional.” As a youngster growing up in Oklahoma City Steve never dreamed of being a football player. It was at his parents’ urging that he tried out for his high school football team.  Overwhelmed by the 140 other aspiring players and self doubt about his speed and size, Steve persevered only because his mother insisted that he do so and would not allow him to quit the team.

Largent developed into an all-state player, while also lettering in baseball, at Putnam High School in Oklahoma City. He earned a football scholarship to Tulsa University. Steve attended college with his high school sweetheart Terry Bullock who he soon married.  At Tulsa, Largent earned a degree in biology while also excelling on the football field. He led the nation in touchdown receptions during his junior and senior seasons. That drew the attention of NFL scouts although most thought he lacked the speed and size to play at the pro level.

The Houston Oilers decided to see what Largent could bring and selected him in the fourth round of the 1976 NFL Draft. He caught only two passes in four preseason games before the team made it clear that he wasn’t a part of their future plans. The young receiver was placed on revocable waivers by the Oilers.

“I cried all the way from Houston to Oklahoma City,” Largent once shared of his drive away from the Oilers training camp. “I thought football was over for me.”

Jerry Rhome, a former member of Tulsa’s coaching staff, was the quarterbacks and receivers coach for the expansion Seattle Seahawks in 1976. Familiar with Largent’s ability, he convinced Seattle head coach Jack Patera to give Steve a try. Seattle dealt an eighth round draft pick to the Oilers in exchange for Largent. It was a trade that didn’t make headlines at the time but ultimately proved to be a monumental move that put the new Seahawks team on the football map.

It didn’t take long for the sure-handed and hard-working rookie to prove his value. He came off the bench in the season opener against the St. Louis Cardinals and hauled in five receptions. He also demonstrated his play away from the ball by throwing several nice blocks. He finished the season with 54 receptions for 705 yards and 4 touchdowns and was voted to the league’s all-rookie team. He continued to improve as a player and by his third season he eclipsed the 1,000-yard plateau for the first of eight times in his career. He also received the first of seven invitations to play in the Pro Bowl.

For 14 years, Largent utilized his great hands with smart route running to not only become the face of the Seahawks franchise but to leave the game as the NFL’s all-time leading receiver.

“He was fun to watch in terms of studying film,” admired fellow Hall of Famer Mike Haynes who as a cornerback with the division rival Los Angeles Raiders faced Largent twice per season for most of the 1980s. “He helped raise my level of competiveness, getting myself prepared for the most grueling matchups of the season, stressing all of the muscles in my legs and ankles. His routes seemed creative, but there was a reason for each move.”

At the time of his retirement after the 1989 season, Largent owned several significant receiving marks. He was the NFL’s career leader in receptions (819), receiving yards (13,089), and touchdown catches (100). He also held the NFL records for most seasons with 50 or more receptions (10), consecutive games with a reception (177), and seasons with 1,000 or more yards receiving (8).

"I didn't play football to set records," he said. "The records were nice and exciting and fun when I set them. But setting records was just part of the process of playing."

Regardless, his staggering numbers and superlative play made him a lock for the Pro Football Hall of Fame once he became eligible after the mandatory five-year waiting period. Appropriately, he was the first long-time member of the Seattle Seahawks to be elected to the Hall of Fame.

All the while he was rewriting history on the football field during his playing career, he was making a name for himself off the field as well. Steve, a devoutly religious man and dedicated husband and father, recognized the many people who served as mentors in his life. His parents divorced when he was young and his grandfather stepped in to play an integral role in his life. Steve credits his grandfather as the one who taught him the importance of giving back to people. As such, Largent used his fame with Seahawks to make an imprint in the community. He was intimately involved in a number of charities. Recognition of his contributions came in 1988 when he was bestowed the prestigious NFL Man of the Year Award granted to a player who combines excellence on the playing field with community service off the field.

The importance of football was not lost on Largent. He clearly understood how the game impacted his life. Perhaps one profound statement from the closing of his enshrinement speech may best summarize his path to greatness, on-and-off the field.

“In football, I found temporary achievements and permanent relationships,” he declared from the Hall of Fame’s front steps in August 1995. “It tested my character and discovered my future.”

One thing is for sure. Steve Largent has always been defined by his strong character which has allowed him to help not only himself but reach others whether serving his constituents during his days in politics, his charity work, or entertaining fans with his reliable pass catching during his Hall of Fame career with the Seahawks.


Pete Fierle is the Vice President of Communications for the Pro Football Hall of Fame. He joined the Hall of Fame’s staff in 1988.

This article originally appeared in the 2010 Pro Football Hall of Fame Official Yearbook.

Largent participates in Heart of a Hall of Famer Series

Class of 1995 enshrinee Steve Largent was in Canton on Fri. April 8 as part of the Pro Football Hall of Fame's Heart of a Hall of Famer series.

For 16 days leading up to the 2011 NFL Draft, we’re rolling out capsule draft histories of each of the 32 NFL Teams.