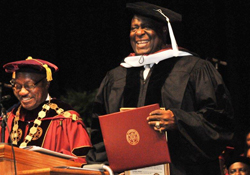 “I am deeply honored to be recognized by my alma mater,” Little stated. “I love Bethune-Cookman because I entered as a boy and departed a man.”

Little was a two-way tackle at Bethune-Cookman and served as the team’s captain. He graduated with a degree in sociology in 1967. Little, one of 15 undrafted free agents to earn election to the Pro Football Hall of Fame, began his pro career with the San Diego Chargers. After two seasons in southern California, he was traded to the Miami Dolphins where he developed into one of the most devastating guards in National Football League history. His brute strength, agility, and leadership fueled the Dolphins vaunted rushing attack of the 1970s. He was named All-Pro six times and voted to five Pro Bowls as well as named to the NFL’s All-Decade Team of the 1970s. Little was enshrined into the Pro Football Hall of Fame in 1993. He is the first and only Bethune-Cookman alumnus to earn the distinction.

Today, Little is deeply involved with his foundation that raises funds to help children learn to swim. He also serves as a community liaison specialist for Miami-Dade County Public Schools.