Heart of a Hall of Famer: Alan Page discusses values of the game, his hometown 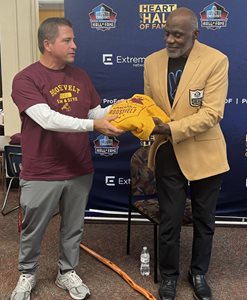 A recent installment in the Pro Football Hall of Fame's "Heart of a Hall of Famer" series went to Skol Country to speak with one of the most accomplished individuals who excelled at the highest level possible when he put on a pair of shoulder pads AND when he wore a robe and carried a gavel.

Hall of Famer ALAN PAGE, a consensus All-American at Notre Dame in 1966, was the Minnesota Vikings' second pick in the first round of the first combined AFL-NFL draft in 1967. Page won the starting defensive right tackle job in the fourth game of his rookie season and he remained a starter for the rest of his career.

Page finished his career in 1981 after playing 238 games, all but three of them as a starter. During Page's career, the Vikings won four of the five NFL/NFC title games in which they played. He also was selected as the NFL's MVP in 1971. Intelligent and hardworking with amazing speed and quickness, Page accumulated some impressive career statistics. He recovered 23 opponents' fumbles and unofficial figures show he also blocked 28 kicks and recorded 173 sacks. After retiring from pro football, Page became a lawyer and was elected to the Minnesota Supreme Court.

During the "Heart of a Hall of Famer" session in front of nearly 50 students at Roosevelt High School in Minneapolis, Minn., Page shared stories focused on the values of the game and how they can be applied to the field, classroom and courtroom. He discussed how when you focus on the "win," you might actually lose. He also touched on what it meant for him to come from Stark County — the home of the Pro Football Hall of Fame. Check out the full episode below or here.

There will be more installments in the "Heart of a Hall of Famer" series, connected by Extreme Networks, in the coming weeks, so be sure to check out the schedule at https://www.profootballhof.com/youth-education.
Previous Article