By Gary Myers
Special to the Pro Football Hall of Fame

LARRY CSONKA was walking into a Buick dealership in Miami to have his car serviced after his rookie season with the Dolphins in 1968. A large man approached the door from the other side. They didn’t know each other, didn’t recognize each other, but it didn’t take much time to figure out they were both football players.

As Csonka pulled the door open, he said, “Who do you play for?” 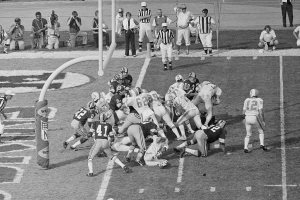 “What are you doing here?” Csonka asked.

“Why don’t you play for Miami?” Csonka said.

Little told Csonka that trade talks were indeed going on for him to join the Dolphins. Csonka had never heard of Little, but his instincts and eyes told him having him upfront blocking for him would be a good thing.

Csonka left the dealership and immediately drove to the Dolphins’ executive offices on Biscayne Boulevard and took the elevator to General Manager Joe Thomas’ office on the sixth floor.

“Does the name Larry Little mean anything?” Csonka asked.

“What’s it mean to you?” Thomas replied.

“He’s a great big guy who I really like,” he said.

Thomas questioned why Csonka would be so enamored without even studying Little’s game film. He didn’t know who Little was 30 minutes earlier and now was lobbying to add him to Miami’s offensive line.

“If nothing else, I can hide behind him,” Csonka said. The GM said he was close to getting a trade worked out. Csonka then jokingly reminded Thomas they were on the sixth floor and “unless you can fly, this better come to pass.”

Days later, San Diego traded Little to the Dolphins for cornerback Mack Lamb, who coincidentally was Little’s high school teammate in Miami. Of course, if the Chargers knew Little would develop into one of the top guards in NFL history, he never would have made it out of California.

Little and Csonka became good friends and two of the most important players on the 1972 Dolphins, who this year (2022) celebrate the 50-year anniversary of being the only “perfect” team in NFL history.

The construction of that squad, voted the greatest team in the NFL’s first 100 years, is a tribute to management’s creativity in acquiring personnel, DON SHULA'S coaching and talented players buying into a team-first culture. Consider how the eight members of the Dolphins’ organization in the Hall of Fame from the 1972 team were acquired:
“I think that was the epitome of how a team should be constructed,” Griese said. “You just take all these parts that you think will fit even though they have different backgrounds. It was a perfect example of all the pieces just fitting.” 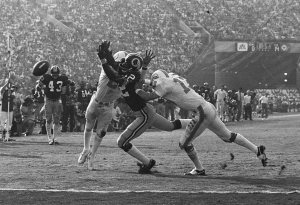 After all the success they had together, Griese once kidded Shula that he walked into a ready-to-win situation when he came over in 1970.

“Shues, you fell into a good thing here. All these guys were already here,” Griese said.

Shula, who would go on to become the NFL’s all-time winningest coach, had a quick retort.

“What was your record the year before I came?” Shula said.

The Dolphins were a 1966 AFL expansion team and had gone 15-39-2 in their four seasons before Shula traded in crab cakes for stone crabs. They lost Super Bowl VI to the Cowboys in Shula’s second season, then won back-to-back Super Bowl titles, first with the perfect season and followed it in 1973 with a team that, despite losing twice, was considered even better than the undefeated team.

“After 50 years, we’re still the only undefeated team in the history of the NFL,” Little said. “We all take great pride in our 50th anniversary this year.”

“We have the greatest team in the NFL’s first 100 years,” Csonka said. 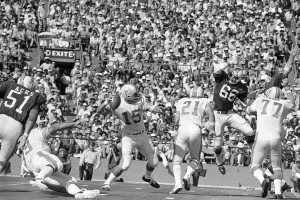 Few outside of the Magic City could have predicted such a memorable season, especially after Griese suffered a broken ankle and broken tibia in the fifth game. He did not require surgery but found himself in a brace for six weeks and was replaced by veteran Earl Morrall, who started Super Bowl III for Shula in Baltimore.

Shula brought Morrall to Miami in 1972 as veteran insurance. It was a policy that paid dividends: Morrall went 9-0 in the regular season and started the team’s two AFC playoff victories.

“There would not be an undefeated team on the books if it weren’t for Earl Morrall,” Griese said.

Though Griese was ready to play by the end of the regular season, he didn’t complain about not immediately getting his job back. He just stayed ready. And with Morrall struggling and the Dolphins tied 7 -7 at the half with the Steelers in the AFC Championship Game in Pittsburgh, Shula went to the bullpen. Griese showed no signs of rust; on his first pass, he completed a 52-yarder to Warfield to set up the go-ahead touchdown on the way to a 21-17 victory. Two weeks later, the Dolphins finished off their perfect season with a 14-7 victory over Washington in Super Bowl VII.

In real time, as the Dolphins’ victories piled up week after week, the talk in the locker room was not about a perfect season. The players were still hurting from the one-sided loss to the Cowboys in the Super Bowl one year earlier, especially after Shula made them watch the tape in training camp, and he told them to prepare each week like it was their Super Bowl. Their focus, even as they closed in on a 14-0 regular season, was on the big prize of winning the Vince Lombardi Trophy.

“That year, we didn’t think of ourselves as the best undefeated team in NFL history,” Griese said. “We just thought we were the best team that year. That was a big motivating factor. We wanted to get back to the Super Bowl and do it right at the end of the season.”

One of the myths about the ’72 Dolphins is that they’ll get together to celebrate when the last undefeated team loses its first game. The truth is Buoniconti and safety Dick Anderson were neighbors and they would p 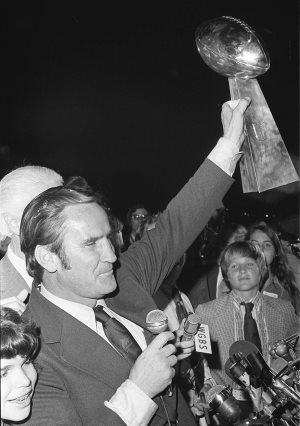 op a bottle of champagne when their record was safe for at least another year. Griese celebrated with a beer at night or some hot tea the next morning.

That’s not to say the ’72 Dolphins don’t pay attention when a team makes a run at a perfect season. The 2007 Patriots came the closest when they joined the ’72 Dolphins as the only undefeated teams to play in the Super Bowl. After a 16-0 regular season, New England added two playoff victories before facing the New York Giants in Super Bowl XLII. Certainly, if the Patriots were able to beat the Giants, an argument could be made that New England’s feat was more difficult than Miami’s – because it came in a longer season and in an era of free agency that promotes parity.

But David Tyree’s miraculous 32-yard helmet catch that set up Eli Manning’s 13-yard touchdown pass to Plaxico Burress left New England imagining what could have been.

“That was the closest anybody has gotten,” Griese said. “I’m a big fan of Eli Manning to this day for making the plays and throwing that ball the guy caught upside his helmet.”

“I never thought in my wildest dream that we would still be the only undefeated team after 50 years,” Little said. “Some teams have come close. But you know, like I say, we are often imitated but never duplicated.”

Gary Myers is the author of the New York Times bestseller “Brady vs. Manning.” His new book, detailing life after football for the 1986 Super Bowl champion New York Giants, will be released in the summer of 2023. A former NFL columnist for the Dallas Morning News and New York’s Daily News, Myers is a member of the Selection Committee at the Pro Football Hall of Fame. This article originally appeared in the 2022 Hall of Fame Yearbook. 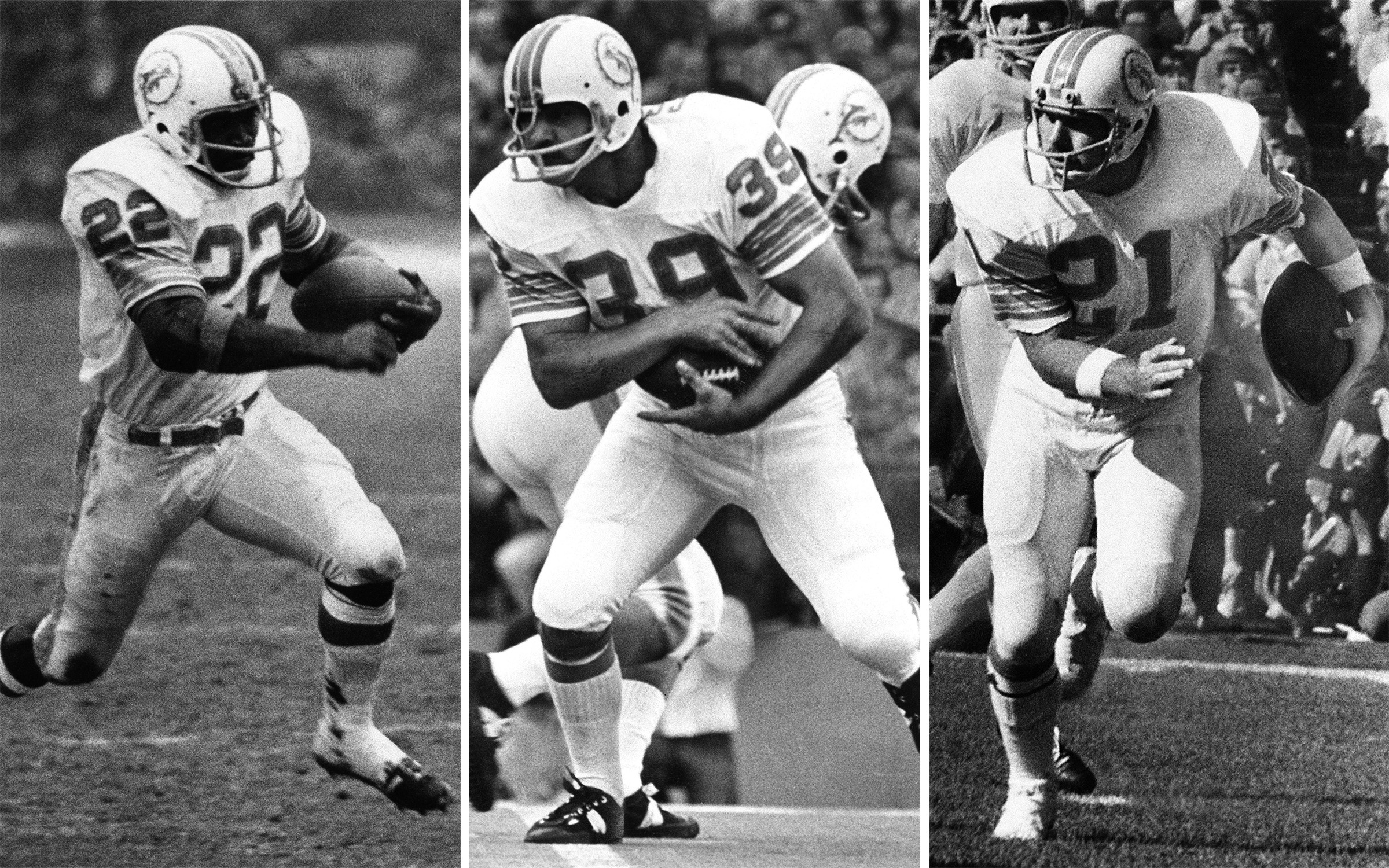 To help look ahead to Week 10 of the NFL schedule, joining "The Mission" is Seattle Seahawks and Minnesota Vikings Legend Steve Hutchinson, a member of the Pro Football Hall of Fame’s Centennial Class of 2020.