The football world today is celebrating the life of RAY GUY, a man of many firsts who proclaimed in his speech as the Pro Football Hall of Fame’s first pure punter enshrined: “Now the Hall of Fame has a complete team.”

Guy, a member of the NFL’s 100 All-Time Team and the Pro Football Hall of Fame’s Class of 2014, died Thursday following a lengthy illness. He was 72.

“Fittingly, much was written when Ray Guy was enshrined in Canton about how his election as the first true punter created a ‘full roster’ of players in the Pro Football Hall of Fame. Too often overlooked, however, was the man behind his powerful right leg,” Hall President Jim Porter said. 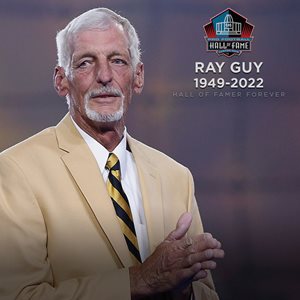 “Ray was a warm, humble Southern gentleman who represented the game, the Raiders organization and the Hall of Fame with dignity and class at all times. A truly gifted athlete, he could have been a star in Major League Baseball or pro basketball. Fans of the NFL thank Ray for choosing to focus on football.”

Born on Dec. 22, 1949, in Swainsboro, Ga., Guy was a Major League Baseball draft pick while in high school. He also played baseball at an elite level at the University of Southern Mississippi — 266 strikeouts in 220 innings pitched and a no-hitter — but football eventually became his specialty.

Guy averaged 44.7 yards (fifth-best in NCAA history) on 200 punts in college. He doubled as a place-kicker and set the then-NCAA record with a 61-yard field goal against Utah State. He also played safety, earning All-America status after setting the Southern Miss school record for interceptions in a season (eight, still stands) and totaling 18 interceptions over three years (still second all-time).

Southern Mississippi coach P.W. (Bear) Underwood said, “Ray is the greatest kid I ever coached. He did our punting, field goals, extra points and started at safety.”

“I was a good athlete and could have been a major league pitcher or an NBA basketball player, but I knew God had something special for me,” Guy said on the day he received his Bronzed Bust. “And eventually one sport would stand out beyond the rest, and it did. Playing in the NFL with the Raiders was my destiny, and I never looked back or questioned my decision.”

Oakland, under owner AL DAVIS and head coach JOHN MADDEN, both future Hall of Famers, had so much faith in Guy’s ability they made him the No. 23 pick of the 1973 NFL Draft. No punter had been taken in the first round until that selection.

“Of all the draft choices the Raiders made in my time, the easiest was Ray Guy. Ray Guy was the only one our coaches and scouts agreed on unanimously,” Madden wrote in “Hey Wait a Minute, I Wrote a Book.”

It would be a long time before the Raiders needed to use another pick — in any round — on a punter.

Only three of his 1,049 punts were blocked. When he retired, he ranked second all-time with a streak of 619 consecutive kicks without a block, a mark that began during the 1979 season and lasted until the end of his career in 1986.

A veteran of 22 postseason games, Guy added 111 playoff punts for a 42.4-yard average to his career totals. He played in seven Pro Bowls and was named All-Pro six times.

Guy boomed punts in excess of 70 yards a handful of times, but it was the loft and “hang time” on his kicks — he was the first to hit the Superdome’s overhead scoreboard — and his precision that separated him from the rest of the league. In the 11 seasons after such records began to be kept, he dropped 209 punts inside the 20. 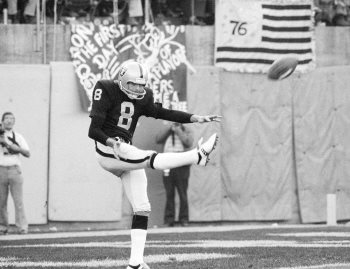 “When he’s got a chance to pin them inside the 20-yard line, he does it and with a high degree of regularity. Do you think that doesn’t help their defense?” then-Chiefs special teams coach Frank Gansz told Football Digest in 1987. “How many teams in the league are going to continually drive more than 80 yards against their (Raiders’) defense? Not very many.”

Opponent after opponent credited Guy with contributing to a Raiders victory, with the words “dominant,” “game-changer” and “weapon” used repeatedly. Joe Horrigan, the longtime Pro Football Hall of Fame historian, once said of him, “He's the first punter you could look at and say: ‘He won games.’ ”

In 1977, Steelers coach CHUCK NOLL declared, “Ray is unquestionably the best in the league. I don’t know of anybody that is a close second.”

He was so good that one opponent wasn’t convinced everything was legit.

Following a 1977 game against Houston in which Guy punted and kicked off, Oilers coach Bum Phillips openly speculated Guy was using footballs illegally inflated with helium. Return man Billy Johnson said he had “never seen anyone hang kickoffs like Guy did.”

Even though the Oilers sent a ball to Rice University for testing, nothing came of their suspicions.

“I never really had a teacher, a coach or a special camp to attend to learn the art of punting,” Guy said. “My high school coach, Paul Leroy, showed me two things about foot alignment and ball placement. That was pretty much it.”

Guy once said, “You can’t overpower a punt. You’ve got to have smooth rhythm. And you have to learn that in your mind. It’s like mind over matter. If you can keep yourself under control, not lose your cool, you can do anything you want.” 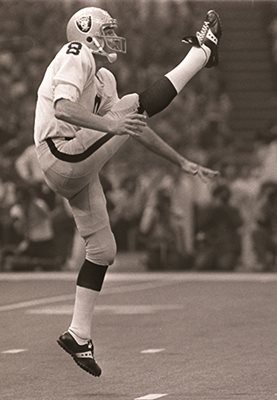 Since 2000, the Augusta Sports Council has presented the Ray Guy Award to the most outstanding punter in college.

Receiving his Gold Jacket, however, took some time. Guy was eligible for 23 years and a Finalist eight times before getting the cherished call.

“It has been a long and winding road from the farmlands of south Georgia to the hallowed halls of the Pro Football Hall of Fame,” Guy said in his Enshrinement speech. “There have been bumps, there have been curves, detours and bridges to cross along this journey, but I have finally made it.

“Even though there would be no more games to play, records to set or championships to win, but to be a part of this very special clubhouse called the Pro Football Hall of Fame, and knowing it's forever, is beyond my wildest dreams. … To know my legacy will forever be a part of pro football history and that my bust will be alongside the greatest athletes of all times, it leaves this old punter speechless.”

Guy’s legacy will be preserved forever at the Pro Football Hall of Fame in Canton, Ohio.

Heart of a Hall of Famer: Cliff Harris talks about 'Welcome to the NFL' moment, leadership

The latest installment in the Pro Football Hall of Fame’s “Heart of a Hall of Famer” series went south to Cowboys’ Country in Dallas, Texas for a sit down with a “rolling ball of butcher knives.”