Hall of Famer Forever Published on : 10/19/2022
The professional football world today is celebrating the life of CHARLEY TRIPPI, the second-oldest Hall of Famer ever and a key member of the Cardinals’ million-dollar “Dream Backfield” of the 1940s.

Trippi, a member of the Class of 1968, died Wednesday, his alma mater, the University of Georgia, announced. He had turned 100 years old last December, celebrating that milestone birthday and the national title for his beloved Bulldogs football team only a few weeks apart.

“Charley has been miraculous,” longtime friend Loran Smith told the Scranton (Pa.) Times Tribune when Trippi celebrated his 100th birthday. “It’s a reflection of living his life in moderation. The bright lights never turned his head. I have never seen him drink more than two drinks at any point at any celebration. 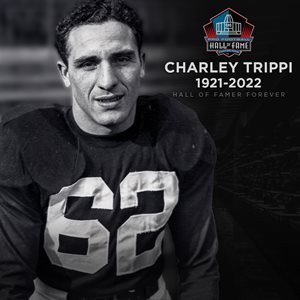 “He has lived a life of moderation, although he was exposed to the life of excess. He was quiet, reserved and affable. He never got into any kind of hell-raising.”

Born into an Italian immigrant family on Dec. 14, 1921 in Pittston, Pa., Trippi wanted to avoid following his father into the coal mines, so he turned to sports.

Undersized coming out of high school, Trippi accepted an offer to play for the Georgia Bulldogs in 1942.

He helped lead the team to a 9-0 win over the UCLA Bruins in the 1943 Rose Bowl, playing 58 of the 60 minutes and earning him the claim to fame as the only Georgia player to win the Rose Bowl MVP award. The 11-1 Bulldogs finished second in the final AP poll.

In 1944, his playing career came to a brief halt when he was called to serve in World War II. He returned to college and won the Maxwell Award as college football’s best all-around player in 1946 and was a member of the All-America Team.

The Chicago Cardinals drafted him No. 1 overall in the 1945 Draft as a “future pick,” although he didn’t play professionally until 1947. To keep Trippi away from the upstart AAFC, Hall of Famer CHARLES BIDWELL signed him to a four-year deal worth $100,000, a contract that illustrated the battle between the leagues for the game’s top players.

Bidwill “wanted me to play for him, and I said, ‘All you've got to do is draft me, and I'm ready,’” Trippi recalled, according to a USA Today article from a few years ago.

Trippi was the final piece to the puzzle of Bidwill’s “Dream Backfield” that included Paul Christman, Pat Harder, Marshall Goldberg and Elmer Angsman.

His NFL career got off to a great start in his rookie season with the 1947 Cardinals. Although he split backfield duties, he compiled 83 carries for 401 yards in 11 games. His best game came in the NFL Championship against the Philadelphia Eagles. In the 28-21 victory, Trippi recorded 206 all-purpose yards that included 102 yards on two punt returns, one for a 75-yard touchdown, and a 44-yard rushing touchdown.

“The biggest memory that I have of back then is it was a cold day,” Trippi said in an interview he gave at age 86 — 60 years after the championship game. “The field was frozen. We played with tennis shoes.”

The Eagles, meanwhile, had come out for the game with spiked shoes.

“They were falling all over the place,” Trippi said, “because the cleats would not stick into the frozen turf.”

His first four years in the league, Trippi played left halfback for the Cardinals. His best year at that position, statistically, came in 1948, when he carried the ball 128 times for 690 yards (5.4 average) and six touchdowns.

In an interview with the Associated Press in 1949, future Hall of Famer Jim Thorpe – considered by many as the greatest athlete of his era – called Trippi “the greatest football player I’ve ever seen.”

“Trippi is an excellent runner, punter and passer,” Thorpe said. “He blocks well and is a sure tackler. Guess that covers the field.”

In 1951, the Cardinals moved Trippi to quarterback. That year, he threw for 1,191 yards and rushed for 501 yards. Although he had a good individual year, the Cardinals struggled with a record of 3-9.

Trippi returned to halfback in 1953, then moved to the defensive side of the ball for his final two seasons, 1954 and 1955. In his nine-year career, he also punted and returned kicks and punts.

Trippi’s career totals included 3,506 rushing yards on 687 carries (an impressive 5.1 average), 1,321 receiving yards on 130 receptions and 2,547 yards through the air. His statistics on special teams were equally noteworthy: career averages of more than 40 yards on 196 punts, almost 14 yards on 63 punt returns and 22 yards on 66 kick returns.

He was selected to the All-Decade Team of the 1940s and played in two Pro Bowls and, uniquely, a record five Chicago College All-Star Games. With the game’s regulations relaxed during the war years, he played twice while at Georgia, twice while in the Army and the fifth time as a member of the Chicago Cardinals in 1948. 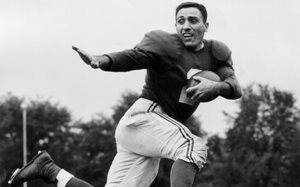 “In those days, the more things a player did, the more pay he could demand. I could run, kick, pass and catch, and that made me a valuable property,” Trippi said.

Trippi was equally dynamic on the baseball field. He hit .475 with 11 home runs as a senior at Georgia. A year later, he batted .344 in 106 games for the minor league Atlanta Crackers. Several Major League Baseball teams tried to sign him, but he opted to join the Cardinals in the NFL.

“He told me he felt he could have played Major League Baseball, but he preferred football,” Smith said. “He never considered playing football and baseball. He felt it wouldn’t be fair to either team.”

During his playing days, Trippi invested in real estate, purchasing and leasing properties. After retiring as a player, he remained active in the league as an assistant coach for the Cardinals from 1957 to 1965.

In 1970, the Pittston Area School District, near Scranton, named its football stadium after Trippi.

“Charley Trippi’s versatility distinguished him on the football field, but it was his demeanor and grace as a man that distinguished him with every person who met him,” said Jim Porter, president of the Pro Football Hall of Fame. “Charley lived to see many changes in the game he loved and never stopped being a fan.”

With Trippi’s passing, the distinction of oldest living Pro Football Hall of Famer moves to Art McNally, the first on-field referee enshrined in Canton. He celebrated his 97th birthday July 1, one month before joining the Hall as a member of the Class of 2022.

The football world today is celebrating the life of Ray Guy, a man of many firsts who proclaimed in his speech as the Pro Football Hall of Fame’s first pure punter enshrined: “Now the Hall of Fame has a complete team.”

'The Mission:' The Class of 2022's Tony Boselli joins the show

Boselli breaks down Trevor Lawrence's second season, the Jaguars' play under the leadership of new head coach Doug Pederson and the amazing work The Tony Boselli Foundation is getting accomplished within the Duval community.