"I may be a nut on this subject, but my idea is that pro football will be a helluva thing in a few more years … Our game is making definite strides forward, strides with each year.” (1936)

Much has been said about many of the early pioneers of the game of professional football, whose dedication and determination against overwhelming odds kept the sport alive during the difficult years. The Arizona Cardinals owe their success and longevity to such a man. He was Charles Bidwill, Sr., who owned the team for 14 seasons from 1933 until 1946, when the franchise was located in Chicago. Even though the club never enjoyed even one financially successful year, Bidwill’s faith in pro football remained always strong and solid. This could be considered a capsule summary of Bidwill’s major contribution to the National Football League, but it is really only part of the story.

In spite of Bidwill's enthusiasm for the game, the Cardinals were not a successful club during the 1930s and early 1940s and were always completely overshadowed by the cross-town rival Chicago Bears. In 1944, it was even prudent for the Cardinals and Pittsburgh Steelers to merge for a year to ease the financial strain and manpower crisis created by World War II.

Still, Bidwill stayed the course. The end of the war brought another problem to the struggling owner. It came in the form of the All-America Football Conference and another rival team in Chicago, the Rockets. But it was Bidwill who delivered the AAFC one of its most stunning defeats when he signed everybody's All-America, Charley Trippi of Georgia, to a then unprecedented $100,000 contract. Trippi was the final link in "Blue Shirt Charley's" so-called "Dream Backfield" of Paul Christman, Pat Harder, Marshall Goldberg, and Trippi. This quartette would lead the Cardinals to their finest achievements - an NFL championship in 1947 and a division title in 1948. Unfortunately and unfairly, Bidwill died in April 1947, before he had a chance to witness the fruits of his labors and savor his team’s greatest triumphs. 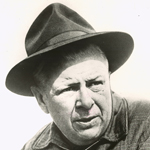 Reverend Clergy, inductees, and ladies and gentlemen. I would like to congratulate the inductees that are being taken into the Hall of Fame today. I congratulate the selectors for their excellent choice. This is indeed a wonderful group that has done so much for professional football.  In death we so easy and often forget our own or our friends. The Hall of Fame and the selectors have not forgotten. It is my honor to present to the Charles and Stormy and Billie Bidwill, their Dad being inducted into the Hall of Fame. You have heard much about his father; however, his father made many contributions to professional football in its infancy that will never be known only by his fellow members that were with him. He took the worst of it and made many sacrifices for the best interest of the National Football League. I am grateful to Story and Billie Bidwill that they choose me to participate in this - - in him being inducted into the Hall of Fame.

If our Dad were alive today, I think (you’ll have to excuse me I’m a little emotional) I think that the one thing he would say is how great it is to be with such fine people and thank you.