"I used my pride, instead of my mind. I thought I was so big I couldn’t be replaced. Nobody’s that big, not in football, not in anything.” 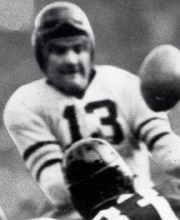 By 1936, Chicago Bears owner/coach George Halas was steadily building the powerful Chicago Bears team that would dominate the National Football League during the 1940s. Halas sought only the finest talent so it was somewhat of a surprise when the NFL staged its first college draft before the 1936 season, and Halas selected a little-known tackle from West Virginia named Joe Stydahar. It was not that Stydahar didn’t have the credentials to be a blue-chip pro.

He had earned various All-Eastern honors and played in the College All-Star Game before joining the Bears. It was just that the Bears passed on several more publicized stars. As it turned out, a Bears end, West Virginia alumnus Bill Karr, tipped off the Bears coach to the talents of Stydahar. History shows the choice was as good as any the Bears ever made.

In many ways, "Jumbo Joe" was the epitome of the Bears' overpowering strength at that time. Fearless and huge by the standards of the day, the 6-4, 233-pound Stydahar possessed incredible power and remarkable speed.

Flaunting his disdain for superstition by wearing jersey number 13, he was a 60-minute performer who often shunned the use of a helmet. His consistently outstanding play earned him All-NFL recognition 1936 through 1940, and second-team All-NFL acclaim in 1942.

Stydahar's tenure as an active player became synonymous with Chicago Bears championships. Starting with his rookie season, he was a fixture at the tackle spot for seven years until he was called into the U.S. Navy following the 1942 season. He returned in 1945 to play for two more years. During that period, the Bears won three NFL championships and five Western Division titles. In Joe's final game, the 1946 Bears defeated the New York Giants, 24-14. It was the last major triumph of the Bears' dynasty years. 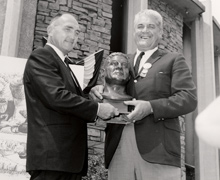 Joe Stydahar:
My dear friends, let me thank those responsible for bestowing upon me this wonderful honor. I want to assure you that I will proudly wear this fine beautiful ring for the rest of my life. I'd also like to thank Dick McCann, and his wonderful staff here at the Hall of Fame for arranging such a fine weekend for me and my family.

I also like to thank Ray Johnson and Dick Logan who have been our wonderful escorts for the past four days.  We came to Canton two days early to enjoy Cantonian hospitality and I want you to know we surely got it.

I want to thank the people at Brookside Country Club who allowed us, me and my family to use their place as our home. I want to thank you fine Cantonians again for a wonderful weekend, something we'll cherish for the rest of our lives.

I want to thank Dr. Danny Fortmann, my teammate, friend, and his wife Mary, who made the long trip here from California to sponsor me.

And lastly, I want to thank my wonderful family, relatives, brothers and sisters and friends from my dear state, West Virginia, who came here to help share this wonderful day. Thank you very kindly.