"The secret to our success is thoroughness.” 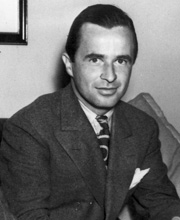 On January 11, 1946, Dan Reeves announced he was moving his Cleveland Rams to Los Angeles. This was shocking news because, less than a month earlier, the Rams had won the NFL championship. Add to that, air travel was still in its early stages and Los Angels was 2,000 miles away from the nearest NFL city.

Most important, Reeves' fellow NFL owners were dead set against the move. But Reeves was just as determined. It took a sometimes-bitter fight and even a threat to withdraw from the NFL before Reeves could convince his colleagues he meant business.

Once the move was made, the Rams had to fight a life-and-death struggle with the rival Dons of the All-America Football Conference (AAFC). Reeves had lost money in trickles in Cleveland but his initial losses in Los Angeles came in tidal waves. The AAFC folded in 1949 just as the Rams were embarking on a string of outstanding seasons on the field.

Boasting some of football's most glamorous stars, the Rams won four divisional titles in seven years and the NFL championship in 1951. The effect at the gate was astounding. Topped by a crowd of 102,368 for a San Francisco 49ers game in 1957, turnouts in the Los Angeles Coliseum surpassed 80,000 on 22 occasions during the Rams' first two decades in California.

The innovative Reeves made several other significant contributions to pro football. He instituted the famed "Free Football for Kids" program that enabled youngsters to enjoy the game in their formative years and then, hopefully, become ardent fans as adults. His signing of the ex-UCLA great, Kenny Washington, in the spring of 1946 marked the first time a black player had been hired in the NFL since 1933. Dan's experimentation in the early days of television provided the groundwork for pro football's current successful TV policies. He was also the first to employ a full-time scouting staff.

Well ladies and gentlemen, it's a real pleasure for me to be back in Canton. It seems like it's every year that I'm back and it probably will be every year for a while. The man I'm going to introduce to you is really quiet a man. He actually was the first man to move franchise to the west Coast. He moved the Cleveland Rams to Los Angeles which led to all the professional sports in the Southern California area which includes baseball, soccer, hockey, basketball, and everything. That took a lot of courage and a little bit of money, I suppose. I really like him; I work for him - maybe that's the reason. He's had some good pupils too, people like Mr. Pete Rozelle who is now the Commissioner of the National League, Burt Rose who is the General Manager of the New Orleans team.

He's been a fine teacher to a lot of us. He started probably what is now the draft system that has been adopted by almost every team in the league. He was the first one to go into it in such a manner, that we had complete coverage over the United States. Through this he was the first man to have a team that played before a million people in one season. In one year, he had crowds of over 100,000, three times. It's quite an achievement for a man. He went a step further, he was the first man in modern day football to sign a Negro, and then came Jackie Robinson and opened the door to everything. It's really a great pleasure for me to introduce a man that has this kind of stature and I'd like to present to you now, Dan Reeves.

I can't, I kind of feel that it wouldn't be nice if Bob Waterfield felt that way years ago when we were talking contract, but it's still appreciated. I think they have the wrong man here. There's a football player down at Dallas by the name of Dan Reeves, so I think this is a mistake, but I’m very happy and grateful for it. And I'm also grateful for another thing - to go into the Hall of Fame with Bobby Layne, because when Dick McCann locks us up at night we’ll be swinging. Thank you.