"The most pleasant way of life is to have a job you love and I love football coaching. Money is relatively unimportant to me, once I’ve taken care of the comforts of my family.” 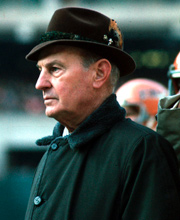 Paul Brown, perhaps more than any other person, is responsible for making pro football coaching the exact science it is today. When he organized the Cleveland Browns in the new All-America Football Conference in 1946, he started doing things no other pro coach had tried.

Brown had a background of exceptional success as a high school, college and military service coach when he was given his first pro assignment with the new Cleveland team. Immediately, he hired a full-time staff on a year-round basis and he instituted a system for scouting college talent on a scale never before imagined by other pro teams. In his handling of his team, he became the first to (1) use intelligence tests as a hint to a player's learning potential, (2) use notebooks and classroom techniques extensively, (3) set up complete film clip statistical studies and (4) grade his own players based on film study. Brown, always a firm disciplinarian, was the first coach to keep his players together at a hotel the night before a home game as well as a road game.

From the strategic standpoint, he started the practice of calling plays from the sideline by utilizing alternating guards as messengers. He developed detailed pass patterns for the offense that were designed to pick holes in the defense, but then he devoted his efforts to perfecting the kind of a defense that could counteract a pattern passing attack.

Brown built a pro football dynasty in Cleveland, posting a 167-53-8 record, four AAFC titles, three NFL crowns and only one losing season in 17 years. In the four seasons the Browns operated in the AAFC, they lost just four games. When the Browns joined the NFL in 1950, they continued their winning ways playing in the next six championship games and winning the title in 1950, 1954, and 1955. 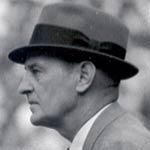 Thank you very much. It's a very distinct pleasure for me to be back in Canton, just a couple of Bears after I was honored, being inducted into the Hall of Fame by Paul himself and of course, now that I'm coaching, it's pretty hard to get time off to come back and do things like this, in fact, I had to call practice off today in order to get her. This is something Paul Brown would have never done; I guarantee you this. He just doesn’t believe in those kinds of things and that's why he was successful, so I probably won't be. But I feel that I am very fortunate to able to have been played under football under Paul Brown - very lucky indeed, because Paul Brown in my estimation is a fine football coach that has ever coach a game of football.

Otto and ladies and gentlemen as you might be well aware this is a red-letter day for yours truly and for the Brown family. I was like, I presume, many of these fellows up here, you think and hope along these lines but you're afraid to think too much about it for fear it might not happen and so, it's a proud day and a very happy one. I want to thank Otts for coming back to do this, I’ve said many times that he's really not only the greatest player I ever had, but really the basic reason we won so many times.

All football players have the same spirit of just the one thing counting - just whether we win. A lot of times a lot of teams could do a little better. I'd like to say this to the people of Canton. I had a rather personal interest in this Hall of Fame and it's being in the area, I think, the Bill Unstattd, the Schreiber boys, people here, Henry Timken, I can remember the meetings that were held real early before this V\7as realized. This was just a piece of ground they were going to pick it out, and we'd meet out at Congress Lake and try to figure out whether we could get it to Canton, and I must say it belongs here, and for any little part that I had in trying to sell National League people in that I'm so very very glad that I did it and that a development by a very artistic director, Dick McCann and what a wonderful speaker.