"Kicking is more than just the fellow who boots the ball. It’s a close teamwork between three players. The center has to get the ball back just right, with the laces in the correct position. The holder must know how to catch the snap and how to place it down with the greatest speed and accuracy. Then, of course, it’s up to the kicker to get it between the uprights. There’s not much room for error anywhere along the line.” 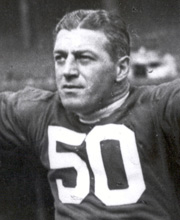 Halfback Ken Strong's most publicized performance in 14 years of pro football came in the 1934 National Football League Championship Game. In that now historic game, Strong contributed 17 points on two touchdowns, two extra points and a field goal to lead his New York Giants to a 30-13 victory over the Chicago Bears. That was the game the Giants resorted to the use of sneakers on an ice-covered Polo Grounds field to upset the previously unbeaten Bears for the title.

For almost 30 years, his 17-point performance stood as an NFL title game record. Strong could do everything – run, block, pass, catch passes, punt, placekick, and play defense with the very best.

An All-America at New York University, it was widely assumed that Strong would begin his career with the Giants. Instead, he opted in 1929 to sign a contract to play for the NFL’s Staten Island Stapletons.

However, after the 1932 season, the Stapes folded and Strong signed with the Giants. In both 1933 and 1934, Ken was a major factor in the Giants’ march to the NFL championship game. In 1936, after a salary dispute with team management, Strong jumped to the New York Yanks of the rival American Football League (AFL).

The AFL folded after two seasons and the Giants welcomed Strong back. Following the 1939 season, Ken announced his retirement. Prior to the 1944 season, the Giants, hard-pressed by wartime manpower shortages, convinced the versatile Strong to return as a kicking specialist.

As a part of the agreement, the Giants understood that he would wear no shoulder pads when playing and that he would even be allowed to wear his wristwatch when he went on the field. Strong, during his 14 pro football seasons, was named All-NFL four times - 1930, 1931, 1933, and 1934. He also earned second-team honors in 1929.

Mr. Chairman, ladies and gentlemen. It is indeed an honor to be here today to see Ken Strong enshrined in the Hall of Fame. I want to congratulate Dick McCann and his committee and the fine citizens of this area for this wonderful Hall of Fame which I think was put in the right place and is really getting bigger and better every year. The only thing I can say about Ken Strong is that I met him at West Haven High when he was a boy. He came to NYU and he could kick 65 yards then with an old round ball. Then his first two years on the varsity he just blocked a tackle sometimes all alone. The last year he ran with the ball and was the leading scorer of the Nation in collegiate circles. I watched him play his professional career year after year and for three years he led the National League in scoring. I'm not going to take any more of your time on records, I'm just going to tell you that he is the finest boy that ever lived. The most humble and an instance of that is last night when we were discussing what a great reception, what great cordiality received here in Massillon, we mentioned Dutch Hill, a boy that played in Massillon and I think he played under Paul Brown, and he played with us at New York University. He was a great blocker and Ken very humbly said, "if it wasn't for Ken or, if it wasn't for Dutch, he said, I wouldn't be here today, I'd be just all ordinary halfback. '' It gives me the greatest pleasure to introduce one of the great athletes associated with the great athletes that have been enshrined today. He's in fine company, God Bless him, thank you. Ken Strong.

Members of the clergy, distinguished guests, ladies and gentlemen. If I appear nervous, I am, I have a right to be on this most memorable occasion of my life. I'd like to publicly thank the gentleman that preceded me. If it wasn't for him giving me the opportunity to go to college, I wouldn't be here. Now we people in West Haven, Conn. have heard a lot about Canton and this area through the years, but you people probably never heard of West Haven, Conn. But you have now, because in honoring me you 're honoring that little town in West Haven, Conn., and I’m sure that they’re very proud of what you are doing for me. This occasion will be remembered long in the Strong family, because here with me today is my wife, my son, Ken Strong, his son Ken Strong the 3rd, 12 years old, and they're not only grateful that I am being enshrined, but we’re also grateful for the wonderful people connected with the Hall of Fame committee that's made our weekend here so wonderful.

I'd just like to say briefly, that I want to thank, I can't mention names, my high school coach, I’ll mention his name, Bert Shepherd, my first pro coach, Doug Whycloff of the Stanton Island Stapes, and my only other coach and a great one, the late Steve Owen who is enshrined in this Hall, and the many players that made all this possible for me as well as, the sports writers who were always kind to me, not only when I had good days on the field, but when I had off days, which we all have. And in conclusion, I'd like to say that when the grand master, the architect of this universe, blows the whistle, some day in the future, and assembles this great gang out on the field up above, I don’t know if I'll be in that starting lineup, but I'll be proud to be sitting on the bench.