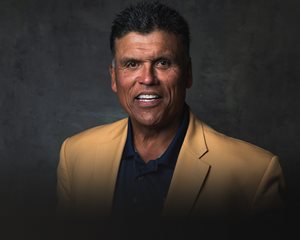 The Pro Football Hall of Fame is ready for the 2022 NFL season, and the newest episode of “The Mission” is now available.

Throughout the 2022 NFL season, the vision of "The Mission" podcast is to connect viewers and listeners with Hall of Famers to help break down some of the league’s primetime matchups, historical matchups and current news storylines, and to learn about the treasured life lessons the game of football has taught these gridiron warriors.

To help look ahead to Week 5 of the NFL schedule, joining "The Mission" is Cincinnati Bengals Legend ANTHONY MUÑOZ, a member of the Pro Football Hall of Fame’s Class of 1998.

Throughout Muñoz’s 13 seasons all with the Bengals, he was considered by his peers to be the premier offensive tackle in the National Football League.

His accomplishments have propelled him to the league’s highest honors as NFL Offensive Lineman of the Year in 1981, ’87 and ’88. Also, a little-known fun fact: Muñoz caught seven passes and scored four touchdowns on tackle-eligible plays.

Watch and listen as Muñoz talks about adjusting into his new role as the Chief Football Relationship Officer for the Pro Football Hall of Fame, his personal playing experiences against New York Jets Legend and Seniors Finalist for the PFHOF Class of 2023, Joe Klecko, and the excitement of presenting Tony Boselli with his Kay Jewelers Ring of Excellence in front of Jacksonville‘s faithful.

Watch the full podcast and learn the code to receive a 25% discount in the Pro Football Hall of Fame store below.

LeRoy Butler, who has a program called "Butler vs. Bullying," spoke about how he overcame being bullied as child and how children today can deal with those situations during his appearance on the "Heart of a Hall of Famer" series.