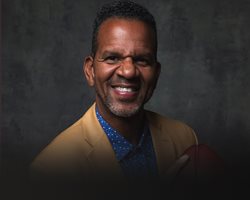 The Pro Football Hall of Fame is ready for the 2022 NFL season, and the newest episode of "The Mission" podcast is now available.

Throughout the 2022 NFL season, the vision of "The Mission" is to connect viewers and listeners with Hall of Famers to help break down some of the league’s prime-time matchups, historical matchups and current news storylines, and to learn about the treasured life lessons the game of football has taught these gridiron warriors.

To help recap Week 1 and break down Week 2 of the NFL schedule, joining "The Mission" is Buffalo Bills legend ANDRE REED, a member of the Pro Football Hall of Fame’s Class of 2014.

With 323 receiving yards — third most in Super Bowl history — Reed broke down some of the top players in today’s game that he says fans should keep an eye on this season.

"I’m specifically looking out for Saquon Barkley of the New York Giants this season," Reed said. "He has had injuries the last three years. This offseason, he has worked hard to come back, and the first week he showed us that he is that player again."

Heart of a Hall of Famer: Eric Dickerson discusses importance of mentorship in the NFL with students

During the latest installment in the Pro Football Hall of Fame’s “Heart of a Hall of Famer” series, ERIC DICKERSON gave students at Leuzinger High School in the Los Angeles area and virtually across the U.S. the opportunity to learn what it took beyond athletic ability to achieve success on and off the field.