"We didn’t make much money, but we had a lot of fun … nothing but fun. Whoever thought that kids who enjoyed the game on all those sandlots would get to play the game on the pro level? That’s pretty special.” 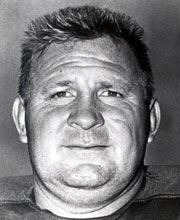 Art Donovan, the son of a famous boxing referee of the same name, first played football at Mount St. Michael's High School in the Bronx. Somehow he was overlooked on the all-metropolitan prep team and, when he played college football at Boston College, the best Art could do was second-team All-New England.

But in the professional ranks, it was a different story for Art, whose World War II service stint so put off his college career that he was a 26-year old rookie when he joined the Baltimore Colts in 1950. The hapless Colts folded after one season, and Art moved to the New York Yanks in 1951, then played for the Dallas Texans in 1952.

In 1953, the well-traveled Donovan returned to Baltimore to play for the new Colts team and, as the Colts developed into a championship team, Donovan developed into one of the best defensive tackles in league history.

The Baltimore Colts' great title teams of 1958 and 1959 featured a terrific defensive line, with future Hall of Fame defensive end Gino Marchetti, Don Joyce, “Big Daddy” Lipscomb, and Donovan, who by then had become the complete player. He was equally adept at rushing the passer, reading keys, closing off the middle, and splitting double team blocks. He had the reputation of being almost impossible to trap.

As great of a contributor as he was on the field, many feel he was at least as valuable to the Colts as a morale builder with his sharp wit and contagious laughter. The first Colts player elected to the Pro Football Hall of Fame, Donovan played 12 seasons in the NFL. 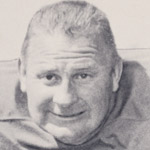 Drafted: 3rd round of special selection draft in 1950 by Baltimore Colts

Thank you very much. Honored guest, ladies and gentlemen. It's my special privilege today to present to Pro Football's Hall of Fame, Mr. Art Donovan. Art is the son of the former great fight referee, Arthur Donovan Sr. He went to Mount St. Michaels High School in the Broncs in New York and after his high school days then served three years in the Marine Corp in the Second World War. From there Artie went on to go to Boston College and then into professional football, first with Baltimore, then the New York Yankees, then to Dallas, then back to Baltimore in 1953, to start a tremendous career with the Baltimore Colts.

Thank you very much, Jimmy. There' s no doubt you could say, if I say it's not a pleasure to be here, I'd only be lying. I could go on and thank everybody from the time I first started playing football back in grammar school at Mount St. Michaels, but I'd only miss a lot of people.

But there are two people here this afternoon that I'd really like to thank. A fella named Don Kellett who was really instrumental in me staying in professional football when I wanted to go home and join the New York City Police Department; he talked me out of it.

There's another fella here who I hit more I guess than anybody I’ve ever hit or anybody I’ve ever hit in their life. A fella who played opposite me for nine years and he and I, in a period of nine years must have hit each other, I'd say 100,000 times. A fella that is here today to honor me, I think one of the finest offensive guards that ever-played professional football, Alex Sandusky. I'd like to thank everybody else, my family, my father, my sister….