"That is the really nice part of playing end. Once I finally get hold of the ball, I’ve only got to elude one or two defenders to rack up a TD.” 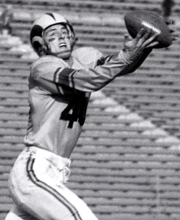 In a crucial game midway into the 1951 NFL season, the Los Angeles Rams found themselves trailing the Chicago Bears, 14-0, and deep in a hole on their own 9-yard line. Quarterback Bob Waterfield faked a handoff, stepped back a few paces and threw far downfield. Elroy Hirsch took off at the snap and was running full-throttle at midfield. Waterfield's pass was over his head but Elroy gathered in the ball on his fingertips and raced for a 91-yard touchdown. The Rams went on to an important 42-17 victory. It was a patented "Elroy Hirsch special," a sizzling shocker that was repeated 17 times that year.

Besides his 91-yard bomb, Elroy had numerous other long-yardage touchdowns as he established a new league record at the time of 1,495 yards receiving. It wasn' t just the number of long-gainers but the way he did the job that set Hirsch apart from all others. "Crazylegs" had a unique running style that made him famous. When running downfield, his muscular legs seemed to gyrate in six different directions at once.

Pro football success did not come easily to Hirsch, even though he was an All-America halfback at both Wisconsin and Michigan before he joined the Chicago Rockets of the new All-America Football Conference (AAFC) in 1946. Hirsch described his three seasons in Chicago as "frightful."

When his AAFC contract expired, Hirsch happily joined the Rams. After a year spent mostly on the bench in 1949, Elroy was shifted to end. Not familiar with playing end, he initially struggled. However, hard work eventually paid off and, a year later, he became a primary contributor to the Rams' impressive march to the NFL title. Many observers insisted “Crazylegs” was the best end ever but Hirsch modestly downgraded his own case. "I'm just a busted-down, retreaded halfback who happened to get lucky." 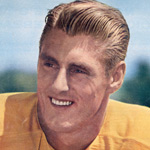 Drafted: 1st round (5th player overall) in 1945 by Cleveland Rams

When I learned it was to be my honor to introduce Elroy, on this most memorable occasion of his football lifetime, I went to an expert on the Los Angeles Ram staff for help. I'm not a speech maker, I said, will you write a speech for me, but make it short, you know I’m not smart enough to deliver a long one. Just tell them how great Elroy was as an end but make it as brief as possible. I'm sure you will agree with me, that it even surpasses the Gettysburg Address when it comes to brevity. It read, when he handed it to me shortly after, "Ladies arid gentlemen, Elroy "Crazy legs" Hirsch the end!" Now, I probably should sit down right now, but it would be unfair to Elroy and Don Hutson and many others who have played end in professional football. A lot of men have caught a lot of passes since they began playing football for a living. It is my opinion that no one before or since did it quite like Elroy Hirsch.

Elroy still has great records in the record books. In 1951 he caught 17 touchdown passes to tie Don ---Hutson’s all-time record and no one else since has caught that many even though they've had 14 games to try. That same year, he got 1495 yards catching passes, and that record just might stand forever. But football is best appreciated, I think, it is unique to our sport, that we keep, I think, our eyes on the field instead of in the statistics books. I think it is best appreciated when you are in the stadium on Sunday afternoon, for you 're there with all the excitement, and if you’ve ever seen Elroy perform on Sunday afternoon you will agree with me. First you saw that peculiar gate of his, that way of running, that got him his nickname. His legs were like the pistons of a car, that is a car with a tank to full of Jack Daniels. Then there is his nickname, there have only been two baseball players who had a nickname as good as Elroy’s, Gerone Hana Dean and George Herman Ruth.

But no one upon being introduced to Elroy has ever asked "Crazy legs” who? any more than they would ask "Papa Bear'' who? you just know who. Another thing that is become Elroy’s trademark, has been the way he caught the long pass. Running at full speed bending his backwards as if he were trying to touch the back of his head to the No. 40 on his back. Believe me, it was' some spectacle. Elroy has frequently made a spectacle of himself. Most of you will remember I’m sure, Elroy' s movie, "Crazy legs '', I know you older folks will and most of you youngsters have probably seen it frequently on the Late Late Show on TV. Like Elroy, it is still running. But "Crazy legs", was the first movie Hollywood ever made about professional football, and it was a good movie, and I think it had a lot to do with making professional football popular. In any discussion regarding Elroy Hirsch, you could never forget his will to win and his come-through ability, which only these great ones have. You also must remember his warmth and friendliness. He never was so busy that he could not help our a rookie player or sign an autograph for a little kid. Elroy now is an executive for the Los Angeles Rams, and he is also husband and father to his wife Ruth, and his son Wynn and his daughter, Patty, who are here today to share this with him. To the rest of us, he is Elroy Hirsch, ''the end”.

If any of you think this isn't tough, I wish it were a kick-off and I were being clobbered, believe me. Thank you very much Hamp, ladies and gentlemen. You know I’ve had a lot of wonderful things happen to me in my life, I've been married 22 years to a very lovely woman, we’ve always gotten along, basically. I've a wonderful son, 18, who has never given me any trouble and a very lovable daughter. I've even carried it so far; I have 22 in-laws and I get along with all of them. And I've made a lot of wonderful friends, both in college and professional football. And these are enough to enrich any man’s life. But, believe me, the biggest honor is today, and I thank you all for it.