"The quarterback’s job is to be a coach on the field. I’d say there are three things a quarterback must have. One, he’s got to have the respect of his teammates. Two, his authority must be unquestioned. And three, his teammates must be willing to go to the gates of hell with him.” 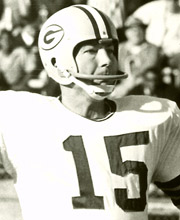 Bart Starr was a 17th round draft choice of the Green Bay Packers in 1956. Three years later, his playing time was still limited and his football future appeared in doubt. That’s when Vince Lombardi took over as the Packers coach, an event that may have saved Bart's NFL career.

Lombardi, in tireless study of films, found that he liked Bart's mechanics, his arm, his ball-handling techniques and, most of all, his decision-making abilities. Under Vince's careful nurturing, Starr gained the confidence to become one of the NFL's great field leaders.

By 1960, Starr led Green Bay to the Western Division championship, the first in a long string of successes for Starr and the Packers. From 1960 through 1967, Bart's "won-lost record" was a sizzling 62-24-4 and the Packers won six divisional, five NFL, and the first two Super Bowl championships.

Although Starr seemed to receive minimal personal recognition for the team’s successes, knowledgeable football men knew who was making the Packers click. He was the perfect quarterback for his team. Because it was a balanced attack that he led, Starr's passes were limited – remarkably, he never threw as many as 300 passes in any one season. This may have helped to create the illusion that he was only an average passer.

The statistics, of course, do not bear this out. Starr held several NFL passing records, including the lifetime record of completing 57.4 percent of his passes over a 16-year period. He led the league in passing three times. He was the NFL's Most Valuable Player in 1966.

He won MVP honors in both Super Bowls I and II. Bart was at his best in his many postseason appearances. After their first title loss to Philadelphia in 1960, the Packers never lost another playoff game under Starr.

Governor Rhodes, honored guests, football fans. It is hard to tell you how thrilled I am to be a part of this program. I will be forever indebted to Bart who has permitted me to share this spotlight with him today along with the four other honored guests that we have behind me here.

It is always a great thrill to see someone reach the very pinnacle of his chosen profession and we are recognizing these men here today for just that. Success comes to those who seek it. These men achieved success from the NFL and it certainly was not by accident. It is by their makeup they are now being successful in other areas of endeavor. Bart sought to be a successful football player in the NFL. He achieved this goal to a degree that had not before been seen. It did not come altogether easy. Bart Starr was not born a nationally great quarterback. Bart had to work to drill to make himself into an outstanding field general. Bart had the intelligence to become a great quarterback. He used his intelligence to the fullest in his development as a superb leader. He used every available source to aid him in improving as a successful athletic. In Bart's high school days, I can very well remember the skinny, freckled-face kid in a group around his coach. Anytime there was something to be taught, Bart was dead serious soaking up everyone that he could. His eyes were always focused on those getting instructions. You will notice that this strong countess still exists in the face of this young man. I know that after practice, home on weekends, Bart was in his backyard drilling and working and trying to vast the ideas that were taught in practice. This, among other things, is the reason Bart Starr became a great quarterback. He was willing to work and to dedicate himself to being the best in his position.

Who can forget the glorious 1960s of the Green Bay Packers? At the helm on the field as we all know, was Bart Starr. He was the number one man on that team, leader. Ask any of his fellow teammates of those teams and they will tell you the same thing. He had the full respect of his teammates and deserved every bit of it. The honors and awards that Bart received as a player of the NFL are too numerous to mention all of them. Bart was the most productive single caller in the 58 years of the NFL as he led Green Bay to five world championships. A feat without equal in pro football history. Bart lead Green Bay to three consecutive titles 1965, 1966 and 1967, the first time such a parley had been achieved.

The Packers all-time field general climaxed his triple-play being led Green Bay to victories in the first two Super Bowls. At those games, Bart was voted the most outstanding player. During this period, of the 60s, Bart lead the NFL in passing for three years. He also made it to the Pro Bowl on 4 occasions. Bart also holds the longest term of service than any Green Bay Packer, 16 years.

In those years, he set four NFL passing records, he set and still holds the lead mark for passing efficiency, 57.4 percent. Most consecutive passes attempted without interception, 294. The lowest percentage of passing intercepted for a season, 1.2. He set the record for the fewest passes intercepted in one season - 3 passes. These are but a few of the achievements Bart Starr has declared in the NFL.

The honors and recognition Bart Starr has received for his activities off the football field are even more numerous. He is recognized wherever he goes as a man of Christian character. A man dedicated to the cause with which he associates himself. He is everybody's Mr. Everything It is with all the pride I can muster, a very thrilling moment for me that I have the honor of presenting to you of the Green Bay Packers, Coach Bart Starr.

This has been some kind of day. Forrest Gregg described the thrill of coming through your town this morning on this parade route, it gave us chill bumps, it really did. It was just sensational, and I want to thank the people of Ohio and Canton and all over the country who have come here today to share this day with us. You have made it most memorable for us this morning.

Some years ago, General Douglas McArther was living out his life in the Astoria Towers, when a struggling young writer asked for permission and sought an interview. Granted him, he was quite nervous, and has he entered the room he was made to feel at ease by the General. His question was ''General, when you was a accommodate at West Point years ago, you were an advocate of athletic competition, do you still vary as strongly today about the merits of athletic competition as you did then?'' The general replied brilliantly, ''Young man the infinite values of athletic competition have but intensified with the passage of time.

It is a vital character builder, for it molds the youth of our country, for our future roles as custodians of the republic. Fathers and mothers who would make their sons into men should have them play the game. For on the field of friendly stride, our sole deceives that on other fields in future years that will bear the fruits of victory.'' If I may be presumptuous to say so, the inductees seated behind me here today personifies that. We are privileged to have been products of athletic competition, football especially. And as each have saluted those who have made it possible, family wise, for them to stand here today, I too would like to.

I was blessed and raised in a Christian disciplined atmosphere at home and to, as our sons so affectionately call them, the Big Mama and the Big Dadda, I am very grateful. To my high school coach who introduced me, for the understanding, for the confidence he helped to instill, and for the leadership qualities he helped bring out that sustained me through an up and down college career and in the first three years of pro football.

And last, but certainly not least, my wonderful family who are seated in front of me here. I made it as a rookie quarterback in Green Bay when the rosters were only 33 in number because my wife seated there must have retrieved 5000 footballs for me that summer. I hung an A-frame in the front yard of her parents’ home in Jackson, Mississippi and worked twice a day throwing as many as I could until my arm was literally tired, and she retrieved every one of them. Honey to you, I am deeply grateful. But even more importantly, I think that she helped to raise two fine sons who were compassionate and understanding and tolerant of my being away from home and fellows I appreciate that too.

I mentioned the background I received from my high school coach and how it sustained me for a number of years of professional football before I was privileged to have the timing to meet up with the legendary Vince Lombardi. I need not tell you of his exploits and his record of coaching you heard them many of times over, but I think the things that have been said today are indicative of what he told us and we learned many valuable lessons there. He was a true genus and a wonderful leader. He taught us the meaning of teamwork and unselfishness, purpose, pride, excellence and many more. And those of us who had the opportunity to play for him, came to appreciate even two more things that I think are much more important. A perspective about team and individuals. That the team must always come first and that you must be willing to subjugate your own desires, egos and ambitions for the good of the team. Because as that team grows and prospers, so will you as an individual and was he so right.

What a privilege it is today to be coming in with a man like Forrest Gregg who was a teammate and if this isn't proof enough of what he said, I don't know what is. And also, he told us that fellows long after the trophies are tarnished and the money is spent and the fur coats, we gave the wives are worn out, the things you remember most are the memories of your teammates, and how true that is. I am grateful to have been part of the Green Bay Packer scene in the 1960s and deeply indebted to the teammates who made it possible for me to be here today. I am very proud of my athletic heritage and background. I am accepting this honor with great humility and I am also going to accept it as a challenge as head coach and general manager of the Green Bay Packers to conduct myself as a living tribute to all of those who helped make this day possible. Thank you very much.