"The game is built around roughness. There is a personal thrill out of knocking a man down, really hitting him. It’s the only satisfaction a lineman has." 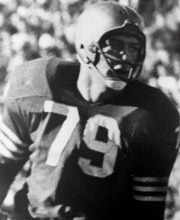 Bob St. Clair joined the San Francisco 49ers as a third-round draft selection in 1953. At 6-9 and 265 pounds, St. Clair's mere presence on the football field tended to intimidate many opponents.

He was blessed with size, speed, intelligence and a genuine love of hitting and, using these traits to the maximum; his on-the-field trademarks became hostility, power, and strength. He was an outstanding blocker, both on passing plays and rushing attempts.

Particularly early in his career, he was used on defense in goal line situations. He also excelled on the special teams. In 1956, he was credited with an amazing 10 blocked field goals.

Extremely popular with the fans and his teammates, St. Clair served as the 49ers’ team captain in 1957, 1958 and 1959. He was named first- or second-team All-NFL nine times and was selected to play in five Pro Bowls. St. Clair was tough and durable and often played in spite of severe injuries. But injuries eventually did cut short his career.

Born in San Francisco, St. Clair decided to play college football at home at the University of San Francisco. When that school quit football after the 1951 season, he transferred to Tulsa, where he was an All-Missouri Valley Conference star. By joining the 49ers, St. Clair became the ninth member of the 1951 USF team to enter the pros.

His teammates nicknamed him "The Geek" because of several of his unusual lifestyle habits, such as eating all of his meat raw. He also became active in politics during his playing career and once served as the mayor of Daly City, California. 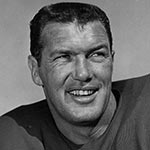 Dave Beronio (presenter):Honorees and all-time heroes, you wonderful football fans and you special people from Pittsburgh, just so I don't throw this game into extra time causing a back-up with an enshrinement class of seven...I 1 ll clock myself to keep time for the Steelers specials.

In 50 years, plus actually, of sports writing covering from Pop Warner High School to colleges and the pros, this is the proudest moment I've ever enjoyed and I share the honor of being a presenter with my fellow sports writers across the country from my town of Vacaville across to Bangor, Maine. All you sports writers will you hold your hands up so I can see you, we love you.

It is really a problem to be serious about Bob St. Clair. How can you be serious about a guy who eats raw meat and tested for the role of Tarzan. Bob was tested by Paramount for the role of Tarzan and this is away from football, while he was playing. He would have won the role, but they couldn't get a rope to hold him you know, he is nearly seven feet. Cheetah kept biting him and when he said “me Tarzan, you Jane,” he would knock her out of the tree.

He never got along with the chimp anyway. He said the chimp had bad breath like a defensive lineman, but Bob played in the days without a face mask as you will soon see.

Actually he was 6'1 10" when he started. They had the form fitting helmets and he shrunk  with the beating he took, but I think with the dedication, the zeal and the intensity of his play, he gave better than he took as proved here by his position here today as an enshrinee.

Bob was a third round draft choice of the San Francisco 49ers in 1953. He played dynamic football at the University of San Francisco and Tulsa. The 1951 USF football team was undefeated, untied and uninvited.

From that one team, nine of those players went on to play National Football League football and four of them are now in the Hall of Fame – Gino Marchetti, Ollie Matson, Bob St. Clair and the fourth being the then Public Relations Director, Pete Rozelle for USF.

Bob played 11 seasons for the 49ers, three times All-Pro, five times in the Pro Bowl. There wasn't anything he couldn't do. He played on the special teams. He played defensive line play inside the 20.

When he came to the team, they threw him in immediately against Leo Nomellini. Leo is now one of the six San Franciscans off of one unit in the Hall of Fame. Bob took Leo head on and immediately became a starter.
Off of that one squad, Frankie Albert's team, in the Hall of Fame with Leo Nomellini, "the million dollar backfield" Joe Perry, Hugh McElhenny, Y.A. Tittle, John Henry Johnson all off one ball club.

Bob set high standards for himself and those that followed him. Only three tackles performed over a period of 35 years. Bob was followed by Cas Banaszek and Keith Fahnhorst for 15 years, starting to get tongue-tied.

The 49ers joined in 1946 in the AFL (All-America Football Conference) came into the NFL and Bob as an integral part and I present him today for your attention into the Pro Football Hall of Fame. the Geek, the one and only, Bob St. Clair.

Bob St. Clair:
Thank you. When I was starting to think of what I should say about how I should feel about being inducted into football’s Hall of Fame, I said to myself “Bob, what you have to do is be humble, gracious, dignified and make a  sophisticated appearance.”

I think the best way I can describe my feeling right now is if you relate to the movie "Rocky" and you remember Sylvester Stallone running, training in the streets of Philadelphia and the music was building up and he ca me to the Federal steps and he sprinted up those federal steps the music reached the crescendo and he raised his hands up high and he said “I made it!” That's the way I feel.

I think the only other time in my life that I have had such a rush is in the birth of my first child, Lynn, who is here today, when I was 18 years old. And you know, when you are 18 years old and you have a child, how important it is. An I am certainly not trying to slight my other five children who are here today – Gary, Greg, Jill, Gale and Renee – but it was the first time and the first rush that I was so excited that I am here today.

My wife is also here, Marsha. And my in-laws I know are back in Santa Rosa, California at our family restaurant. Lena's watching me on television and experiencing with me the excitement of this moment.

The only disappointment that I have is that my mother who is 83 years old was not able to make it. She had surgery just recently; she had planned to be here. My sister Rosemary is here who was taking her, but I know mom you are back in Daly City, California and you are watching this and we know you are here in spirit, God Bless you.

You know this all started when I was 9 years old. I was a Cub Scout and I was a flag bearer in the East-West game out in San Francisco in Keezar Stadium and I can remember looking up being 9 years old and seeing these giant football players and saying to myself, "Oh boy, someday would I love to be able to play football and be like these giant athletes."

Well, needless to say, I played 188 games in that stadium and hold the record today and I can remember when I was in high school I got the best advice from my football coach, he told me "Bob, you are 5’ 9”, you weigh 160 lbs. your 15 years old, you are not big enough to make this high school football team. My advice to you is go home and grow a little”

Damn it! I did exactly what he said. I grew 6 inches in one year and put on 60 pounds. My Polytechnic High School, as Dave indicated.

I went on to the University of San Francisco and played with outstanding football players, two are in the Hall of Fame Gino Marchetti and Ollie Matson and I am so proud to have been a part of that team with Joe Scardaro, and Dickie Stanfel, the coach of the Bears, defensive coach who played so many years with the Detroit Lions. He is going to be here today.

I went to Tulsa University after USF for one year and I think I was the first hold out in the NFL. My first contract in 1953, they offered $5500 that was for the whole year and I held out for $6000.

My 12 with the 49ers were so great, they weren't great in the sense of we won championships but they were great because of the fact that I was able to play with such great football players, my teammates who I dearly love and respect today. Hugh McElhenny, the King. As a lineman, you know as a defensive lineman, you get very little credit. The satisfaction we had when we played as offensive lineman is to watch a back like Hugh McElhenny lead you around the end and flatten that DB and get up and watch Hugh go all the way for a touchdown.

Or Joe Perry slashing through the line after you flatten the middle linebacker.

Or John Henry Johnson who was very difficult to block for because every time you knocked someone down, he wanted the piece of the action and he would hit into you too. That's what an offensive lineman gets out of the game.

One of the real true people that I respect so much that has helped me be here today was a fellow teammate of mine, a defensive end so many years with the 49ers, his name was Dan Colchico. Dan's work was very simple. He had one speed and that was full speed and this was during practice and even though I would get extremely upset, he made me play to my capabilities at all times during practice so when Sunday came along and by the game, it made it so much easier for me to play and because of Dan I feel I was a much better football player. And Dan is sitting here, thank you very much Dan.

We had so much comradery in the days when I played and it is exemplified today by the organization, the NFL Alumni, which is caring for kids. We all belong to, the NFLPA, which is the National Football League Players Association, concerned about players present and past. The Director, Gene Upshaw is here. The President of the NFL in my chapter is here plus the Director, Bruce Bosley and Jerry Mertens. And this is what it is all about.

I only hope today's athletes are experiencing the same closeness on and off the field as we did in my era because if they're not, they're missing what the game of football is all about.

I want to thank you very much all of you for making my day in the sun so memorable.