"My object is to stop the guy before he gains another inch. I’m usually dealing with ends who are trying to catch passes, and if I hit them in the legs they may fall forward for a first down. There is nothing I hate worse than a first down." 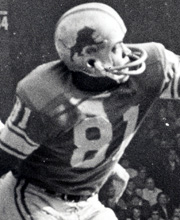 Dick Lane was an Army veteran “looking for a good job” when he stopped in the offices of the Los Angeles Rams in 1952 and asked for a tryout. All he had for credentials was a battered scrapbook, which chronicled his football experiences in high school, junior college and the Army.

The defending-champion Rams’ coach Joe Stydahar saw just enough “good press” in the scrapbook to offer Lane a trial. At first Dick was tried at end but with future Hall of Famers Tom Fears and Elroy “Crazylegs” Hirsch set as starters, his chances didn't look good. Lane did, however, spend a great deal of time consulting with Fears, who was continually playing the hit record "Night Train," on his phonograph. One day, a teammate entered the room, saw Dick and blurted out, "Hey, there's Night Train," and "Night Train Lane" it was from then on.

Once Stydahar moved Lane to defense, he quickly made an impression. Blessed with outstanding speed, exceptional agility, reflex action, and a fierce determination to excel, “Night Train” set the NFL on fire as a rookie. He intercepted a record 14 passes in the 12-game season. Besides being a constant threat to steal passes, Lane also became known as a devastating tackler.

Lane also was willing to take chances on the field in spite of the risks. Most, however, would agree that percentage-wise he was well a head of the game. Lane played two years with the Rams before being traded to the Cardinals in 1954.

Six years later, he was sent to the Detroit Lions where he enjoyed his finest years. Dick was named first- or second-team All-NFL every year from 1954 through 1963. Named to seven Pro Bowls, Night Train intercepted 68 passes for 1,207 yards and five touchdowns during his Hall of Fame career. 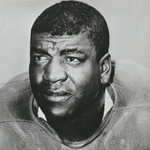 Drafted: Signed as a rookie free agent by the Los Angeles Rams

Thank you, Mr. Muzzy, Mr. Vice President, celebrities, ladies and gentlemen. To me this is the most auspicious occasion of my career. No experience in my 41 years in public school education dealing with hundreds of teachers and thousands of students have brought me more satisfaction than this. It never dawned on me in the mid-40s that a 6-foot 140 pound are playing right and for us would obtain the status and this recognition. I know of no one who is more deserving for he is one who strives to the best. He believes in the excellence. He wants to go first class period that is why he is had 14 successful seasons in professional football. That is why his record shows 14 interceptions in a given season still stands. He's given of himself in his ability, his determination to reach this goal.

I congratulate you Night Train and wish you for your continued success and happiness. I hope that Richard junior will strive to obtain the same excellence period since you are first, I had better make this general statement I told last night all that I want you to know about the two of us. So, I'm not going into that, but I want to remind you that Texas is not a large state, it is a big state. And, we do things in a big way. Nigh Train since you, the 7th native Texan to be so enshrined, you are the product of Austin, Texas, you are the first product of the Austin Public School System. I would like to personally present to you a congratulatory scroll signed in this order by: Governor Briscoe, Mayor Butler, Dr. Jack Davidson, the superintendent, Mr. and Mrs. W.E. Pigford, Mr. Templin and Mr. MacDonald, my assistant coaches and 11 of the boys who played with you who are still in Austin. I hope that you will continue as you have started. It is my pleasure to present Night Train Lane for his enshrinement. Night Train.

Thank you, coach. Vice President of the United States, Mayor, other dignitaries, ladies and gentlemen. I like the other nominees; I don't plan by memory know, but I say all the things I have in my memoirs. So, I wrote mine down, at least some of them, those you should be interested in. I'm sure you heard these words before. This is a great honor, and this is one of the proudest days of my life. They should original and overuse, but I mean this from the bottom of my heart. Dick “Night Train” Lane Is glad to be here today should be enshrined by the Football Hall of Fame. This is a total of 81 enshrinees in just by coincidence that was my playing number. I would like to pay personal and heart felt tribute to my teammates-- the other players who were not so fortunate to last as long as I did in the National Football League.

They didn't reach the glory, but they were men who made the business what it is today. Their contribution to football during their performing years has made the game what it is today. They are the cornerstones of this foundation, of the NFL. Those were really the days. We didn't fly first class, we didn't stay at the holiday Inns, we didn't even have Gatorade. We just played some of the best football ever. We were paid at least $3,500, and I didn't make that much more and still maintained in the perspective of the definitions of professionalism. I find it disturbing today when professional football is the most popular sport of America, the future of the NFL is in Limbo. I can only hope that the offers of the owners, the coaches and the players, past and present will direct toward a betterment of the League and not for personal gain. I can only hope that the owners can understand that football was and still is and always will be the game for the players and the fans to fill the stadium and shout their names--inspiring them on through the thrill of victory and the agony of their defeat. I can only hope that while the players are striking for improvement that the black players will take this opportunity to band together and deal with the problems of no black coaches, no general managers and no quarterbacks in the NFL--or I should say a few. It is not fair or pardonable for Blacks to be treated like stepchildren in Pro Football. It was wrong in my day and it is wrong today. In the League that we have established, management must realize that times have changed and must adopt a new philosophy and a different approach with the players and the game. I know that some people voiced opinion of that retired players shouldn't have an opinion about the present situation between players and management. I disagree because these players are fighting for some of the very things I wanted in my career.

Again, I would like to say thanks to Dick Gallagher and the rest of the committee for selecting me to the Hall of Fame with this illustrious group of these fine athletes. Again, I would like to thank my present employer in my real good friend Redd Foxx for shooting the show on an early basis last night and traveling by plane all night to get here to be here to accept this honor with me. Again, ladies and gentlemen, I would like to say the wives of professional football players, I know it has been hard and I know it will be hard for the ones that are coming along now for keeping the players fit, keeping a good home and some of the things that (mumbled)…. talk about family life. I take my hat off to the wives, and I say to them you have to give a little bit more and I think that is clear that if that is so that man of yours in the National Football League will give a little bit more too. Thank you again for inviting me and this will always be the greatest thrill of my life. Thank you.