"You know I’ve always had confidence in myself. I still think I could do more things better than any other back that ever lived.” 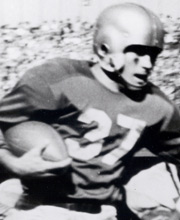 Doak Walker, a three-time All-America and the 1948 Heisman Trophy winner while at Southern Methodist, brought glowing credentials to pro football when he joined the Detroit Lions in 1950. Yet many National Football League scouts honestly felt that, at 5-11 and 173 pounds, Doak was too small. They predicted the "big boys" of the NFL would simply overwhelm him.

Walker quickly erased any doubt that he belonged in the NFL. In 1950, he was All-NFL, the Rookie of the Year, the league-scoring champion, and a Pro Bowl participant. The honors kept coming for him.

When Doak wound up his six-season career after the 1955 campaign, he had been named All-NFL five times and selected to five Pro Bowls. It’s no coincidence that, during the his six-year career, the Lions enjoyed their finest years ever with three divisional titles and NFL championship victories over the Cleveland Browns in 1952 and 1953.

Doak was a do-everything contributor for the Lions. His career chart shows entries in every possible statistical category – rushing, passing, receiving, punt and kickoff returns, punting, place-kicking and even interceptions. Because he did so many things, his career figures are not overly impressive except in the scoring column, where he scored 534 points and won two NFL scoring titles. Walker had a knack of making the big plays in the most important games.

In 1952, he returned from an injury-enforced layoff to throw a 24-yard touchdown pass to Leon Hart in the divisional showdown against the Los Angeles Rams. In the NFL title game a week later, Doak rushed for 97 yards, and his 67-yard jaunt proved to be the winning tally in a 17-7 victory. A year later, in the NFL championship, Walker scored the game's first touchdown and then kicked the winning point in a 17-16 triumph over the Browns.

This is exactly like third and three, that's a tough down. I had the most fabulous time these last three months this weekend, I have ever had in my life. Man, these Hall of Famers, these inductees, we have had a ball. You know I have had only had two great things happen to me in football, one was the first world championship and the other was being inducted into the Hall of Fame and now I have three and I believe this one today jumps up and it is number one. Doaker and myself we started in grade school not high school in 1939. You all just think about that and although we had quite a few different habits through the years, we have remained the closest friends in the world. He is probably the greatest player I ever played with in my life and I know he is the greatest clutch player of all time. This is oak's day, it is not mine, so I want to present the one and only, the Doaker, Doak Walker.

Well, that is pretty tough to follow. The Hall of Famers, enshrinees, ladies’ arid gentlemen and all my friends, this is something, I tell you. I really never thought I would be up there, and, in some ways, I’d rather be out there where you are, but I guarantee you it is worth waiting for. You know, there are a lot of folks that are very, very happy I am in the Hall of Fame now. For example, Mr. Earl Schreiber, one of the Board members of the Hall, he can go back anytime he wants to Detroit and not get hassles by either Gil Mains or Ron Kran1er or Vince Banonis, he can come out the same way. Nick Kerbawy, who was our former general manager there in Detroit, he doesn't have to make any more excuses why I am not in the Hall of fame. He has made a bunch of them up until now. My father, he doesn’t have to try to stay awake at night to figure out how he can stuff the ballot box, but he has always been a little prejudice. Of course, Bobby and I won't have to stay up all night working on our speeches.

You know this is the greatest honor any professional football player can receive for being acknowledged for. Today I can say I am officially retired as an active player--. I am very proud to be in the Class of 1986 and more proud that my name goes down with the greatest players that ever played the game.