"This game is more mental than physical…It’s the guys who are right mentally who come out on top. It’s the guys who don’t make the big mistakes who win. Maybe that’s why I do well in big games. When the pressure’s on, guys get tight. By my very nature, I’m a loose character…In the big games I make less mistakes than some other guy. 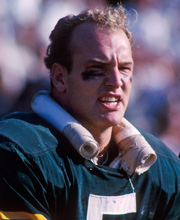 Even though the Green Bay Packers had quality players at almost every position during the "dynasty years" of the 1960s, many insist that Paul Hornung, the team's bonus draft pick in 1957, was the most important contributor to the Packers' successes.

Said to have a "nose for the end zone," Hornung scored 760 points in nine seasons on 62 touchdowns, 190 PATs and 66 field goals. As his record clearly shows, Paul did more than just score points. He gained 3,711 yards rushing and 1,480 yards on pass receptions.

In addition to his placekicking, he was a superb blocker and highly effective on the halfback option pass. Known as "The Golden Boy," Hornung was above all a leader to whom the Packers looked for the big plays in the big games.

He reached the zenith of his colorful NFL tenure with three exceptional seasons in 1959, 1960, and 1961. Paul led the NFL in scoring each year and, in 1960, he posted a record 176 points. The 1956 Heisman Trophy winner as a Notre Dame quarterback; Hornung was the NFL's Most Valuable Player in 1961. In the 1961 NFL Championship Game, Paul was on Christmas leave from the Army when he stunned the New York Giants with a record-smashing 19-point outburst as Green Bay won, 37-0.

Paul’s pro career got off to a slow start as he divided his time between fullback and quarterback for two different head coaches. That changed, however, when Vince Lombardi was named coach and he made Hornung his starting halfback. Throughout his super-star career, Paul remained a dangerous threat to put points on the board.

In 1965, he scored five touchdowns against the Baltimore Colts and scored the clinching touchdown in the championship game against the Cleveland Browns. 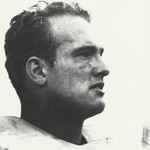 Well, ladies and gentlemen, I have the easiest chore I have ever had in my life. I lived with this guy for 10 years and I have been a best buddy for 30 years and then about in two minutes he will receive this award which will make him receive every major award in football. All-America in Notre Dame, Heisman Trophy winner at Notre Dame. Of course, when he left Notre Dame, he wasn't an ordinary draft choice, he was the bonus club which the Packers won the lottery to pick the number one player in the nation and they picked Paul Hornung.

Now a days they would call that an impact player, that's the modern term. Believe me, Paul was an impact player for the Green Bay Packers. He also was an impact player on half the females in the United States. Well, Paul came to Green Bay in time of turmoil, he had three coaches in three years and the good news is that the third coach was Vince Lombardi. Vince Lombardi said "Paul, I have an offense for you.” And he put Paul at left half-back and from there Paul won two most valuable player awards, he won most valuable player award in a championship game, he won every award Pro Football has to offer and he did it with style believe me because I was right there with him.

The statistics never really tell what Paul Hornung did for the Green Bay Packers because statistics never tell about the times when he blocked that defensive end or he picked up that blitzing linebacker, but I think when you look at championship games that is what you look at. Those things are what make championships and that is what Paul did for our team. He did everything. He just didn't run the ball, pass the ball, and kick the ball, he blocked and for that his teammates as well as everybody in the country, realize that he is one of the greatest all-around football players that maybe will ever play.

Paul scored 176 points in a 12-game schedule and if you figure it out that is about 15 points a game and I played on teams that didn't average that much. Paul has not only been successful in football, he has been successful in business and some of his assets are here today and that is great friends from Louisville, his business partners. They had a little luncheon for him yesterday that drew 2,000 people in Louisville. All his friends and ex-teammates, I think Herb Adderley said it very well when he said Paul is the main man and that is exactly what Paul was at that time the main guy. Mrs. Hornung is here who helped a little bit to raise both of us. Of course, his best asset is his beautiful wife, Angela, who is sitting here in front of me and we love them dearly. And believe me, I wouldn't be here today if Vince Lombardi were alive, because Vince and Paul had a very great personal relationship as well as a football relationship. And Vince would run me off and he would make this presentation and Vince made a statement that I think signifies what Paul really is. He said, “when the game is on the line, Paul Hornung is the greatest player I ever saw.” And by gosh I believe it. I present the Golden Boy, Paul Hornung.

Thank you very much. Thank you very much. Hall of Famers, fellow enshrines, ladies and gentlemen. First of all, Max and I share a lot of things and he just told my speech. I want to thank you, Max for those kind words. We do go back a long way and I really want to say that Max really should be going into the Hall of fame. More importantly, his beautiful wife, Denise, back home in Minneapolis, she’s eight months pregnant and Max is going to be a father in one more month and that is definitely Hall of Fame material considering his age.

You know I see Fuzzy Thurston, Ron Kramer in the audience, Herb Adderley and a lot of my teammates and I can remember back, Fuzz, when he and Kramer said stick close to me, I want to get you to Canton. He was kidding then, but Fuzzy, we are here and you're here with me and I am glad you're here.

This is the greatest day of my life. I have waited a long time to get here. But this weekend I will be able to take with me forever. Because this is the most important weekend of my life athletically. It started off in my hometown of Louisville, Thursday and continuity on now forever. It is also a day of thanksgiving for the Hornung family. I don't have time, time has warned me, to stand here and thank my friends, my former coaches, my teammates, but I do want to thank a little lady for encouraging a youngster to play football, got mad when I came in a little late sometimes and she is here. This is just as important for my little mother who raised me all by herself, God love ya.

And as Max said, Lombardi. He meant a lot to all of us and for Paul Hornung he probably meant a lot more than the other inductees. And I have always said there are 10 inductees in the Hall of Fame from that Green Bay Packer team and that is a significant singular honor and I am just as proud of being a member of the Packers going in as I am on an individual basis and I really mean that sincerely.

I have always said there are only two athletes off that team that would have been in the Hall of Fame on the New Orleans Saints, the New York Giants, the Kansas City Chiefs, any team anywhere, Herb Adderley and Forrest Gregg ere those two athletes, they were that good. But the rest of us, including Nitschke, needed Lombardi. Taylor need him, Star needed him, but above all, Hornung needed him. I think he would be a very happy man today. I saw young Vince two days ago and as the years go by, he is a splitting image. We love Lombardi. It was a special time and a special team. There was a genuine love on that football team, and I was glad to be a part of it.

Today, I think there are a lot of people in this audience that can fully realize how happy I am to be standing here along with these four gentlemen behind me that I am proud to be going into the Hall of Fame with. This is the greatest moment we could all hope for. And I don't want to leave, and I am going to come back every year to this place.

And I want to thank my little wife, Angela, who I married ar1d got me off the streets, thank God. If she ever puts me back on them, I'll kill her. She was Mike McCormack's secretary at the Philadelphia Eagles and she also knows about football and Eddie Aisle. She knows what it is like to be hired and fired in professional football. She has been a great inspiration to me, and she will be until the day I die. And last, again, thank you very much for this tremendous honor and I want to thank Vince for the weather.