"I scramble because I’m good at it, because I can twist and dodge those big pass rushers better than most guys, and we get a lot of touchdowns that way." 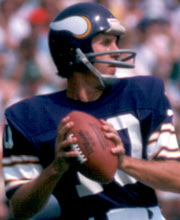 Fran Tarkenton's career as a National Football League quarterback started with the fledgling Minnesota Vikings in 1961, took him to the New York Giants in 1967, then back to the Vikings in 1972.

In Minnesota's first game, the rookie from Georgia came off the bench to fire four touchdown passes and run for a fifth in a big upset of the Chicago Bears. For the next 18 seasons, the 6-0, 190-pound field leader never let up in his relentless quest of yardage and touchdowns.

At the time of his retirement, Fran owned every significant passing record – 3,686 pass completions, 47,003 passing yards, and 342 touchdowns. But particularly in his early years, Tarkenton attracted widespread attention as an exciting scrambler who took plays from sideline to sideline. Add his 3,674 yards rushing to his stunning passing totals and you have 50,677 yards – almost 29 miles or 500 football fields – of offensive progression. Yet Tarkenton was also a "quality" passer, as his 80.4 passing rating that placed him in the upper echelon in that category demonstrates.

Tarkenton was a No. 3 draft pick of the 1961 Vikings. He became the starting quarterback early in his rookie season and continued his outstanding performances for the next six seasons. But in 1967, he was sent to the New York Giants in a trade that netted the Vikings two No. 1 and two No. 2 draft picks over a three-year period.

Five seasons later, Fran came back to Minnesota in another massive swap that cost the Vikings two veterans, a rookie and two high draft picks. In Fran's final seven years with the Vikings (1972-1978), he led Minnesota to six NFC Central Division titles and three Super Bowl appearances. He was named first- or second-team All-NFL three times and selected to play in nine Pro Bowls during his career. 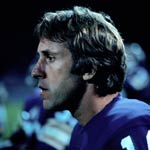 Drafted: 3rd round (29th player overall) in 1961 NFL Draft by Minnesota Vikings. Also selected in 5th round of 1961 AFL Draft by Boston Patriots.

Thank you. I would like to take a minute or two to tell my wife, Helen, out there that I was not voted into the Hall of Fame, but I am a presenter! It is a tremendous honor for me to introduce the man who has been probably the most wonderful quarterback in the National Football League. There was never a time since the day we drafted him in the third round out of the University of Georgia that he didn't appear to be the fellow that would be on this podium sooner or later. He has been named by so many people, including Bud Grant, as the greatest quarterback that ever stepped on the football field. His records stand by themselves are a most sensational thing. He has scored more yardage. I don’t want to bore you with figures, he has scored more touchdowns by himself, but the great thing he did, he was an innovator, a new concept was born as he became the quarterback. He was a fellow that showed them how to scramble, how to score, how to win. He is the greatest, he was the greatest scrambler and emulators galore now come from all teams that want to emulate Tarkenton’s ability and record.

As I met him for the first time in about five years, I looked at him and I was tempted to almost offer him another five-year contract. I could give you some of the records he has and you could look them up in the record books. Sensational, but he logged 29 miles -- get it -- 29 miles in running and passing in the field and that is about 3 miles more than the Boston Marathon. But he did not run in the marathon, he ran on the football field. He steered the Vikings to three Super Bowl games. I don't want to labor on how we came out. OK, yes, we lost, but that was not his fault, really. There was a breakdown in many parts, and we just lost to teams that were good because they were also in the super game and it just got to be one team that wins and one that loses. It's incredible. Does that ring a bell? It's 'incredible'?

Today, he is a very successful businessman. A talented TV performer -- and today I am hoping he will soon be a Viking executive.

The reason I chose Max Winter to introduce me is because he gave birth not only to my football career, but to the Minnesota Vikings into professional football. When he put down his hard-earned cash, he risked it and he payed my salary for most of my 18 years. And Mr. Winter, I am very grateful for you to do that and I will definitely take you up on your offer for another five years -- and at the prices you’re paying today, I accept.

He mentioned something about scrambling. I did a little bit of that during my day. I really didn't want to do that, but if you look up here at some of the past enshrinees, you see Doug Atkins, Deacon Jones and Ray Nitschke, and they were trying to kill me, ladies and gentlemen. And that pocket got crowded, and I wanted to get out, and I did. And I turned into a very elusive, fast man because of that.

This is a very special weekend and like so much what football is about, being with these fellow enshrinees has been a revealing experience also. I have been across the field against all of them except Doak Walker. Mr. Hornung, Mr. Houston, Mr. Lanier and the Doaker. He was a childhood hero, that shows you how old you are, Doak. I loved to watch No. 37 play at SMU and then with the Detroit Lions, and I looked at him afar and had great respect for him, but this week I have grown to love them as human beings, as people, not just people who just threw passes and caught passes and blocked and tackled, but as people who are sensitive, who are real, who care.

When I look back over 18 years of professional football, four years of college football, four years of high school football, which I believe comes to 26 years and a lot of losses, a lot of wins, a lot of disappointments, a lot of high points, and you think you will never get over the losses and the wins that take you up to the highest point. And you think, 'Boy, am I pretty good,' and finally you overcome all that, too. And you say, 'What came out of 26 years of playing?' And all the years of the people up here have done and what comes out are the most important things: not the wins, not the losses, not the awards, not the publicity and not the money, Lord knows where that ever went. What lives are the experiences of the people that you played with, the Jim Marshalls, the Mick Tinglehoffs, the Carl Ellers, the Bob Tuckers, the Spider Lockharts, and those are the things that live in your heart and stir your soul and move you on. And those are the things that live in your heart, and those are the important things.

The most meaningful thing to me of this entire weekend was the parade this morning and the 2, 300,000 people out there who were honoring my friends up here. And they were stretched along the streets of Ohio in mid-America, and that is what America is all about. And we didn’t know them and they didn't know us, except by the common bond of watching us play football and enjoying watching us play football. And I saw people of all dimensions, some in wheelchairs and some sick and some healthy. And if you look into the eyes and faces of those people as they look back and forth to you, there was a common bond, a common love and common concern that stirred my soul for the hour we went down that street. And my soul is stirred today as I look out here at many of you that I do not know, I have never met before, but I feel I know you.

By my many friends who came here from all over the country, from Japan to San Diego to here. George Shortly, from New York, from Minnesota, my partners Irvin Jacobs and Carl Pohlad, from Minnesota many of you others from Atlanta, Georgia, my golf buddies -- and Alpo we are going to beat you in the morning. I appreciate it more than you will ever know, my friends, that you would come to share this moment with me, for this is the most humbling moment of my life and the greatest moment of my life, and I thank you for coming here and sharing it with me today.

To my lovely wife, Tammy, who puts up with me -- and that is a large charge -- and supports me and loves me. And like Paul’s wife, Angela, she promises to live with me the rest of my life, and I hope she does. My children who are my best friends in the world: Angela, Melissa and Matthew, who travelled all over this country between New York and Minnesota and Atlanta and didn't complain a bit about changing schools or about having to make new friends. It was what daddy had to do, and I thank you and I love you for doing that. My little mother of 73 years young who is stronger than all of us on this stage, who what little competitive fire I got. I got it all from her because she is a fighter, and every year I didn't get into the Hall she would always ask, 'I hope I can live to see the day when you do.' And Mom, you did.

To one who is not here, and I am going to try to get through this, gang, without crying, but I am not sure I can, so please bear with me. A little 5-foot, 6-inch man who happened to be a preacher man, who wasn't a man of great stature. He wasn't on television and he didn't make a lot of money. He didn't own any businesses, but that man was a great man and a great father, because when I fell down and disappointed him, instead of kicking me around and telling me I was a no good so-and-so who wasn't like they used to be, he pulled me up through my deepest sorrows arid disappointments and hugged me and told me he loved me and let me understand what love is all about. That little 5-foot, 6-inch who didn’t know whether the football was blown or stuffed, loved to watch his son play football, and he died watching me play football when we played in the famous 'Hail Mary' game against the Dallas Cowboys in a playoff game and he had just finished his sermon in Savannah, Georgia, some 10 years ago. That little man is not with us here today in person, but I know he is looking on, and I know he is proud.