"They say you don’t get much recognition on the offensive line but there is a lot of satisfaction if you know you’re doing our job and the coaches know it. Our backs always knew they didn’t make those long runs by themselves.” 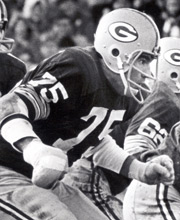 During the 15 seasons that he played in the National Football League, Forrest Gregg could have been described as one of the best to play his position in the history of the game. A native Texan, Forrest starred in college at Southern Methodist and was the Green Bay Packers' No. 2 draft pick in 1956.

Even though, at 6-4 and 249 pounds, he was considered small for the job, he was ticketed from the start for the offensive right tackle position. Realizing that he would never be able to overpower the monstrous defensive left ends that would be pouring in on him, Forrest went right to work learning how to finesse them. He spent countless hours watching coaches’ films of the most noted stars. It wasn't long before he knew the moves of every opponent and had perfected ways to combat them.

Forrest earned an "iron-man" tag by playing in a then league record 188 consecutive games from 1956 until 1971, his final season which he spent with the Super Bowl-bound Dallas Cowboys. As the Packers grew in stature in the 1960s, so too did Gregg. He won All-NFL acclaim eight consecutive years from 1960 through 1967 and was selected to play in nine Pro Bowls.

In 1961 and again in 1965, when injuries created a crisis on the Packers’ offensive line, Gregg willingly switched to guard to fill the void. In 1965, one major wire service named him an All-NFL at guard, the other picked him as its all-league tackle. Gregg was named to the NFL's All-Decade Team of the 1960s and the NFL 100 All-Time Team. 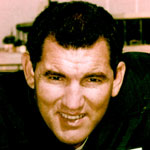 Thank you. Honorable Governor, ladies and gentlemen, fans. When I am getting ready to come to Canton, Ohio for this great weekend, I get so excited I can't wait to get on the airplane. And I would like to congratulate these inductees and particularly their families who made so many sacrifices to make this great honor possible.

Last night our very distinguished Commissioner spoke very briefly about Forrest Gregg's record as a football player and it is absolutely spectacular. I am not going to try to repeat it because I would probably forget it and won't remember half of it anyway and maybe get it all wrong. But I would like to talk about Forrest Gregg the man. I read somewhere where Vince Lombardi made football players out of men and men out of football players, but not this man. He was probably the finest all-around team player that ever played this game. Proof of the fact being that when he was an all-pro tackle with the Packers, he was perfectly willing to make the supreme sacrifice of switching from tackle to guard when he was needed and to be able to make that switch and then to be voted an all-pro guard at that position.

Now when Forrest was about 30 years old, he decided to maybe look for his future. And he was offered a coaching job at the University of Tennessee and after a very short time he had second thoughts about it. So the coach and I were down in Puerto Rico on vacation and needless to say he was pretty upset about this chain of events, and one night in our room the phone rang and it was one of the assistant Packer coaches and said ''Vince, Forrest Gregg want to come back and play, do you want him''.

Well friends Vince yelled so loud through the phone the room shook, the building shook and even the ground shook, he wanted Forrest back so bad and Forrest you might have signed the first one million dollar contract for the National Football League he wanted you back that bad. Because how do you replace a Forrest Gregg as a player, as a coach, as a man and as a friend. And to use the old clichés of honesty, integrity, commitment, excellence. dedication may sound old and tired, but I don't know of any man who these apply to more tl1an Forrest Gregg. And if you take these qualities and apply them to Forrest Gregg the coach, those the man of his players how can he miss. and last year he was voted coach of the year.

This is a very emotional time for me because as I stand here today, I think of how Vince Lombardi would feel to see three of his sons being so honored and men like Forrest Gregg, Frank Gifford, Bill Willis, Gale Sayers and Bart Starr. These men are the elite along with the other men in this great Hall of Fame, they are the elite of the NFL, they are the men who have reached the top. Well Forrest you join this elite group and from your friends in Green Bay, your family, your teammates, your team in Cleveland and your boss Art Modell, we love you, we wish you luck congratulations, this must be your finest hour and thank you for making me a part of it. Thank you.

I knew that this time would come, and I would be the one who got up here and try to tell the people exactly how he felt about being inducted into the National Football League's Hall of Fame. I can think of a lot of things to say, I can think of a lot of things I should say, but I think what happened this morning was the most emotional thing that has happened to me in my lifetime. When I was going down the street in that parade. I saw friends that I knew and I saw my family sitting on the side, it made me think back as to how it all started and I don't want to get too deep into this right now, about how it all started because I am pretty emotional about it. But as I look out and see my family, I think about how empty it would be, how little it would mean if I did not have them to share it with. Sometimes in the game of football, not just professional football, but in all football, the families sometime are left a little bit to the side, but I can tell you this much right now, if it had not been for my wife Barbara, her love and her encouragement I would not be standing here right now. My two children. Karen, my daughter and Forrest Jr, my son. They have known nothing in their live but professional football.

I sit and I listen to Marie Lombardi talk about Vince Lombardi, talk about the Green Bay Packers. Marie. I would have given anything in the world to have known that Vince said that on the telephone, I would have asked for a lot more money. Vince Lombardi-I can't talk up here without mentioning his name and think about what he did for me and I know when Bart gets up here, he's going to say the same thing. This man was the maximum, for a lack of a better adjective to describe him. as a football coach. And this lady who sits back here and presented me. We have such a great love for her that it is hard to express right here. When the time came when Earl called me and told me I had been selected to the NFL Hall of Fame, I could think of one person that I should immediately call and share this with and that was Marie Lombardi.

I mentioned a couple of minutes ago about professional football and what it means. I think Frank Gifford expressed a lot of our sentiment about this game. I spent 15 years as a player. I don't know how many years I will spend as a coach, but I can tell you here and now that this is the greatest business in the world. I can't think of anything in this world that I would rather be than a head coach of the NFL and the coach of the Cleveland Browns.

To reflect back for just one moment, I think there are some people in my past that I need to thank. Everybody thinks about his beginning in football, I think about those high school coaches that I had who had an interest in me and got me started on the right track. I think about my college coaches who were all interested in me and who did so much for my career. I am so pleased since I went into professional football in 1956 with Bart Starr who is behind me to be inducted in that same group. This to me is an elite bur1ch of people the ones who are behind me right here, Frank Gifford, Bart Starr, Bill Willis and Gale Sayers. It means so much to me to go in with people of this caliber. And I just have to say once again, there is no thrill on earth like the one I have got as I stood up here and spoke to you people and realizing I was one of 93 people that ever played the game of football that will be put in that house. Thank you very much.