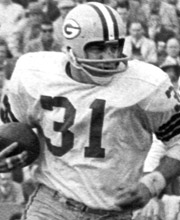 When Vince Lombardi took over the Green Bay coaching reins in 1959, fullback Jim Taylor became the Packers' bread-and-butter guy. Lombardi depended upon him to get the needed short yardage whether it was for a first down or a touchdown.

As the Packers’ dynasty grew, so too did Taylor become the symbol of power in the awesome Green Bay attack. Jim was a throwback to an earlier era, who ran with a fierceness no one could match. He caught the short swing passes and blocked with rugged determination.

Thousand-yard seasons became a specialty for Taylor. He went over 1,000 yards five straight seasons beginning in 1960 but reached his zenith in 1962, when he had a career-high 1,474 yards and was named the NFL Player of the Year.

Jim was living testimony to the popular football adage "When the going gets tough, the tough get going." Nowhere was this more evident than in the 1962 NFL title game. Playing on a bitter-cold day, Taylor engaged in a personal duel with the New York Giants' outstanding defense, led by All-Pro linebacker Sam Huff. Jim carried 31 times for 85 yards and scored Green Bay's only touchdown in a 16-7 victory. He took a fearful pounding both from the hard-hitting Giants and the frozen ground. He suffered an elbow gash that took seven stitches to close at halftime and a badly cut tongue. At the end, he could scarcely see and he couldn't talk.

Taylor was often compared with Jim Brown, the Cleveland fullback, who played at the same time. There were many different viewpoints but Lombard's summation was most succinct. "Jim Brown will give you that leg and then take it away from you. Jim Taylor will give it to you and then ram it through your chest!"

Thank you… correction this is my fourth trip to Canton. I want to congratulate the enshrinees and to compliment the Hall of Fame on their fine selection this year, and to thank Jimmy Taylor for making me a part of it, it is truly a highlight for me. About 6 weeks ago I wasn't sure I could be here, because I was in the hospital having a nerve block on my face and it is a terrible thing because it numbs the one side of your face and your mouth doesn't work too well. And what could be worse for a woman if her mouth doesn’t work too well.

It shattered me pretty badly when I knew I just couldn't be here so I called my son in Seattle and I said Vince you better call Jimmy and tell him I can't go to Canton because I can't speak. He said all right mother, if that's what you want. An hour later I called him back and said Vince, don’t call Jimmy because a big voice up there said to me, you better be in Canton "and you better do a good job, so here I am and I better do a good job because he probably would trade me. And I just kind of suspect that I am pinch hitting for that Italian with that big voice who can't be here.

Now everybody knows of those fine records that Jimmy made in Green Bay, those magnificent five years where he gained over 1, 000 yards. I know he did because I saw him gain every single one of them. But I have to say today is the day he will take the most pride in because, you see, he is the first, the very first of the great Packer players of what is known as the great Lombardi era to be taken into the Hall of Fame. And it occurs to me when I go into the Hall and I see the history of the great National Football League, that the years of the 60s was something special. I think it was professional football's finest hour. And the Packer players of the '60s dominated football at its finest hour and it must be a great joy for Jimmy to know that he is the first to reach the top. As Coach Lombardi used to say, ''I don’t care anything about gimmicks or tricks on offense, you play this game with power, you do what you do best and you do it again, again, and again.'' Jimmy Taylor was that power and he used to say we had thunder and lightning on the Green Bay Packers and Jimmy Taylor was that thunder.

And I have a tape at home and on that tape an interview with Howard Cosell, Vince evaluates the players and he says this about Jimmy Taylor and I quote, ''Jim Taylor isn't big for a fullback, but when you bump against him it's like bumping against an iron statue in fact he likes that feeling. The thing about Jimmy is he really likes people. I don't know anyone on the squad that has a greater need or a greater capacity for friendship and understanding than Jim Taylor.'' Vince and Jim did have their misunderstanding but who didn't. And I saw something I would like to share with you and it's special because it's the only time it happened. When the coach was sick and in the hospital in Washington, many, many Packer players came to see him and one of them was Jim Taylor. And I went in the room with him and Vince took his hand and he held it and held it for such a long time, and friends the love and the understanding that went between those two hands., I will never, never forget.

And we have a great need in our country today for great heroes. We don't have any heroes, but I believe the men here enshrined in the Hall of Fame are today's heroes. So now Jimmy your beautiful wife, my friend Dixie, your two children Jo Beth and Chip, and your family, I congratulate you, I am happy for you, God Bless you and we love you. Thank you.

Toastmaster, enshrinees, guests, fans. I would like to thank a few of those people who had a lot of influence on me, the leadership, patience, understanding. In fact, when I was at Baton Rouge High and when I started my career in athletics, I would like to mention Paul Harrison my high school coach whose very instrumental as he is an athlete. Pat Bureah, the track coach and trainer at my high school was very instrumental in leadership and leading me to be here today. Kenny Day, a basketball coach was a fine gentleman and I certainly admired him, and he gave me the strength and confidence to go on and to be an a athletic. Charles McClendon and Paul Diesel who were coaches at LSU had certainly the confidence to stay with me and give me the opportunity to play college football. And not to mention the Green Bay Packers of the early '60s not to mention the Bart Starr's, the Ray Nitche's, the Jerry Kramer's my good friend Fuzzy Thurston, one of the reasons that gave me the opportunity to be the type player, the team work the unity that was molded into our ball club through Vince Lombardi and certainly was so many wonderful years and honors and occasions. One certainly can be excited about the people who I was connected with and gave me the opportunity to play football.

I think I would like to say just a few words about the late coach, Vince Lombardi. He probably instilled to me the admiration, the dedication, the discipline, the determination as a football player and as a man than anyone I have been connected with. I would like to thank the Hall of Fame members who voted on me and the fans of Canton. It has been a wonderful week, one that I will cherish and remember forever.