"This is like being a kid, having fun and being animated. If I didn't do any of this, I would be too mechanical, too uptight. I want to be loose. I am at my best when I am rolling and throwing. I am different, but I am consistent." 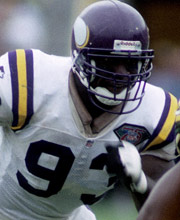 John Randle, a Little All-America from Texas A&I, signed a contract as an undrafted free agent with the Minnesota Vikings in 1990. He played in all 16 games as a rookie before he earned a starting role at defensive tackle in his second season.

Injuries forced him out of the starting lineup for parts of the 1991 and 1992 seasons before embarking on an impressive streak of 176 consecutive games played and 133 straight starts with the Vikings. After joining the Seattle Seahawks as a free agent in 2001, he ran the string to 183 games and 140 starts before a knee injury forced him out of a game.

Randle showed signs of becoming one of the NFL’s most dominant pass rushers during his second NFL season when he recorded 9.5 sacks. The following year he added 11.5 sacks which marked the first of eight straight seasons with double-digit sack totals.

In the 1993 season, Randle registered 12.5 sacks, amassed 59 tackles and forced three fumbles to earn All-Pro honors and a Pro Bowl invitation for the first time. It began a string of six straight All-Pro and Pro Bowl seasons for Randle. He improved his sack total again in 1994 with a NFC-high 13.5 sacks. Randle recorded perhaps his finest season in 1997 when he led the NFL with 15.5 sacks and also had a career-high 71 tackles.

His single best performance came against the Green Bay Packers on September 22, 1996 when he had a career-high 3.5 sacks and forced two fumbles as the Vikings raced out to a 4-0 start on the season after defeating the Packers, 30-21. Randle was named NFC Defensive Player of the Week for his performance and then earned NFC Defensive Player of the Month.

In all, Randle amassed 137.5 sacks during his 14-season career. He led the Vikings in sacks nine times and the Seahawks twice. Thirty-five times he recorded multi-sack games including eight games with three or more sacks. Randle was elected to seven Pro Bowls (1994-99, 2002) and named to the NFL’s All-Decade Team of the 1990s.

1998 NFC – Atlanta Falcons 30, Minnesota Vikings 27 (OT)
Randle started at right defensive end. He had one tackle in the game.

(at time of his retirement following 2003 season)

S Seattle Seahawks All other titles won with Minnesota Vikings 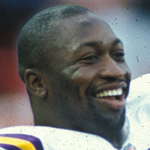 John Teerlinck (presenter):
John was the original energizer bunny. He was the bunny before they had the bunny. This guy was nonstop. No one wanted to see Randle coming. You were in for a rough-ass day and that wasn’t an act.

I first met John in, be the winter of ’91-’92 after I left the Rams and signed down with Denny Green at Minnesota. John was a back-up defensive end and a special teamer. He was not drafted, so he wasn’t one of the premier guys, but you recognized that he was a young, eager, fire-round, go-get-em guy. And you knew you had something to work with, you just didn’t know where. We set up a bunch of drills back then just to see what we had—watch movement, watch how you could use your hands and feet and he just took over the drill. You could really see this guy had all kinds of shake and wiggle and movement, and of course, a nonstop motor. So right away he caught your attention.

He was a Parana on a feeding frenzy. We told him you had one thing to do, get to the quarterback. We stole the old Viking line from Bud Grant, lets meet at the quarterback and that’s what he did best.

John had 137.5 sacks in his career. And the thing that’s so amazing of those numbers, is 54 came on third-down, but 53 came on first. That’s entirely unheard of. Most people get their sacks on third-down out of a sub package, out of a mismatch, but first down for John was just as pass-happy as third down. That really says a lot.

I remember a game against Detroit, I think we got Mitchell seven or eight times, we got the ball out five or six times, and with the crucial times when we had to have a play Johnny would come up and get us off the field. When someone had to be the closer, he could close it out.

Narrator (Steve Sabol):
But Randle wasn’t content to only let his play do the talking.

Teerlinck:
John talked a lot of trash, but it wasn’t the normal taunting kind of trash talk, it was funny, it was stuff to get distracted. More stuff that he’d choose, wondering where do you get that stuff from, or that’s really off the wall, why is he talking about that? And it might not have anything to do with football. These guys would shake their heads, saying this guy’s nuts. He wanted you to think he was crazy; he wasn’t crazy.

Narrator:
Though his methods may not have been conventional, they were effective. During nine different seasons, Randle tallied at least ten sacks, earning himself seven trips to the Pro Bowl and six First-Team All-Pro selections.

Teerlinck:
I’ve been lucky enough to coach 31 playoff games, six championship games and be in four Super Bowls, and having the chance to pres 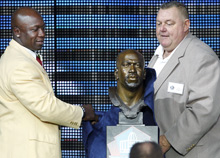 First of all, I want to thank John Teerlinck for presenting me, motivating me, focusing me on the game that I love. I also want to say, John, thank you for saying I could excel and play in the National Football League, even though I wasn't drafted, didn't play for a major school. Also thank you for showing me what sometimes I didn't see in myself.

Also I want to thank my hometown, Mumford, Texas, population 150. I also want to thank Herron, Texas, where I went to high school. Also I'd like to thank Keith Waters, who many of you may not know. Keith coached me at Trinity Valley Community College. He also convinced me to continue with my dream of playing football when I was uncertain about college and my future. He also encouraged me to go to Texas A&I with a rich winning tradition. Thank you also for all my college teammates at Texas A&I. Thank you, guys.

Next I'd like to thank the Minnesota Vikings, a team that believed in me, gave me a chance to play defensive line when most teams thought I was undersized and I wasn't going to make the team.

Also a lot of credit goes to my teammates at the Vikings and also the Seattle Seahawks, and especially my teammates when I first got in the league, such guys at Henry Thomas, Chris Doleman, and Randall McDaniel. Thank you, guys, for taking me under your wing and showing me the way.

I'd also like to thank Jerry Burns, Denny Green for seeing something in me and also believing that I could make the team.

I also want to thank Dennis Ryan, the head equipment guy from the Minnesota Vikings for finding a shoulder pad that would fit this small body (laughter). I'd also like to thank the fans for those days when I thought I had given my all and had nothing left to give. You may not believe this, but those days when I believed that I couldn't go on, I didn't have the strength to continue, you gave me the strength to play hard, practice hard, and to go out there and play a hundred percent on every play.

I also would like to thank my two big brothers Dennis and Ervin Randle. Thank you for letting me follow you around Mumford, Texas, when we were growing up. I'd also like to thank my mom, who is no longer here. She raised three boys by herself with very little money. Thank you, mom. I love you.

I'd also like to thank my loving family, my wife Candace, she is my strength and best friend, and my kids who are my pride and joy. I also want to thank my whole family in Texas and a new one in Minnesota for being on this journey with me and also for helping me believe in myself and continue after football.

I also am so humbled by this incredible honor which I never thought was possible. Thank you to the Pro Football Hall of Fame, everyone who played a part in electing me for making this small-town kid's dream come true.