"The game is about life and it’s about what you have to do to pick yourself up to make yourself the best you can possible be.” 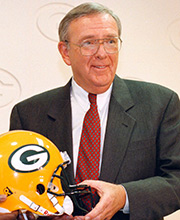 Ron Wolf began his long and successful run in the National Football League as a scout for the Oakland Raiders in 1963. For almost four decades he was recognized as one of the finest personnel men in the league and made his lasting mark as the longtime player personnel director for the Raiders and later as the Executive Vice President/General Manager of the Green Bay Packers.

Wolf first left the Raiders in 1966 to work for the American Football League’s office but returned to the team several months later after the AFL merged with the NFL. He continued in Oakland until, at age 37, he was named general manager of the expansion Tampa Bay Buccaneers. He built the foundation that earned the team a trip to the NFC championship by its fourth season. However, by that time, Wolf was back with the Raiders and played an integral role in the team’s sustained success.  In the 23 seasons Wolf was with the Raiders, the team posted winning seasons in all but six years, claimed 10 division titles, played in eight AFL/AFC championship games and three Super Bowls, including victories in Super Bowls XV and XVIII.

In 1990, Wolf began a brief stint with the New York Jets before he was named Executive Vice President/General Manager of the Green Bay Packers late in the 1991 season. He quickly resurrected the once-proud franchise. The Packers improved from 4-12 in 1991 to 9-7 in 1992, Wolf’s first full season on the job. The Packers added two more 9-7 records that earned playoff berths and then, in 1995, the team finished 11-5 to claim its first division title in 23 seasons. It marked the first of three straight NFC Central Division titles for the Packers, the last two culminating with Super Bowl appearances.

The 1996 Packers posted the first 16-win season in franchise history. The club won the NFC Central with a 13-3 record and followed with victories over the San Francisco 49ers in the divisional playoff and the Carolina Panthers in the NFC Championship Game. The magical season was capped by a thrilling 35-21 win over the New England Patriots in Super Bowl XXXI as Green Bay once again earned the moniker, “Titletown, U.S.A.” 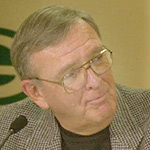 Thank you.  Thank you.  Ladies and gentlemen, as my friend Kenny Chesney so happily sings, "This is our moment, this is our time, this is our destiny, it’s our night to shine.”  I want to thank the Hall of Fame committee for bestowing this phenomenal honor on me.  I also want to congratulate my fellow classmates on their induction into the Hall of Fame.  To think that Ronnie Wolf from New Freedom, Pennsylvania, who graduated 101st in a class of 83 from Susquehannock High School, is being inducted into this fabled hall is remarkable. The goddess of victory comes about only once or twice during the course of a contest.  There is that moment when a play is needed to be made.  These gentlemen seized that moment and exhibited that ability throughout their careers.  It is truly an honor for me now to be included in their company.

I would like to acknowledge my wife, Edie, who permitted me to live my dream.  My two sons, Jonathan; and you've met Eliot; Eliot's wife, Regan; my three daughters, Saralyn and her husband, Paul; Celli and husband, Steve; Joan; my grandson, Owen; and my brother, Guy.  And that's it, folks.  Further, I want to thank the current Packers organization for all their support.

I had the good fortune to begin my career working for the legendary Al Davis.  Not only did he set a standard of excellence for five decades in the NFL, as commissioner of the American Football League, he brought about the merger between the two leagues.  I spent 24 seasons working for him and appreciate deeply all I was able to learn.  He was a remarkable teacher, and I am forever in his debt for providing me with an opportunity to work in this extraordinary game.

In 1990, I left the Raiders and joined the New York Jets.  There I met Dick Steinberg, who taught me there are many different approaches to achieve the same goal of winning.  I was able to take what I learned from him, tweak it and use it in my next position.

Around Thanksgiving of 1991, I was hired by Bob Harlan to become the executive vice president and general manager of the Green Bay Packers.  When I was hired by the Packers, I did not realize what a wonderful place I was moving to.  The history of this magnificent franchise is unparalleled in the annals of the National Football League.  Those great names that surround Lambeau Field epitomize excellence achieved on the gridiron.

I was fortunate enough to be able to hire Mike Holmgren, trade for Brett Favre, sign Reggie White, and because of those three people, plus an excellent supporting cast, the Packers started to become a force once again in the NFL after over two decades of mediocrity.

At that time there was always a threat to players of other teams that if they didn't shape up, they would be traded to Green Bay.  We worked hard to eliminate that stigma.  Suddenly players wanted to come and be a part of football's most illustrious franchise and to play in pro football's most storied cathedral, Lambeau Field.

There are several people from the so-called Ron Wolf tree who have had great success recently in this profession, and you know who you are.  I'm very proud of your accomplishments.  Congratulations on all you have done for the sport of professional football, and on a personal note, thank you for all your help in resurrecting the Packers.  Here's wishing you continued success as you pursue your own destiny throughout your careers in the NFL.

There are several individuals who played a huge role in my life in pro football.  I was very fortunate to be able to work in the AFL and NFL for 38 years and owe a great deal to too many people to mention.  But I do want to thank every member of the Green Bay Packers organization from 1992 to 2001. Bill Parcells for his counsel and friendship. And Mike Ornstein for his efforts on my behalf.  To succeed in this game, you have to love it, respect its history and understand you have a responsibility to make it better.

Michael Jordan said that, but the same applies to professional football.  Football has such a broad appeal.  I think it is the ultimate team game.  It is a game of human will coupled with unbelievable athletic skill and grace.  Nothing expresses that any better than watching receiver catch a ball, tap his two feet down inbounds for a completed pass.  It is still, however, a contest of blocking, tackling and kicking.  No matter how hard people attempt to change the rules to get more scoring, it still comes down to those three basic components.  To me, that is the uniqueness of the NFL and the wonderful aspect of the game of pro football.  It is the reason behind a tremendous appeal the game has achieved nationally.

Because this night is long with lots of other presentations, and those of you who know me well know my reputation for extraordinarily brief speeches, as my dad would say, "I love a good speaker.  I really do.  Not one who is polished, but one who is through."  Thank you, thank you very much.