"I think catching passes is judgment, mostly. I’ve got good vision; good peripheral vision. I think sometimes I can see things the defensive back doesn’t see. I watch for him to make his move—you’ve got to study the guys in this league—and if he’s a fraction late compensating for mine, then I’ve got him beat." 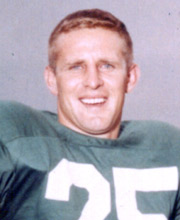 Wide receiver Tommy McDonald was a third-round draft pick of the Philadelphia Eagles in 1957. An All-America choice at Oklahoma, he won the Maxwell Award in 1956 as college football’s player of the year. During his three years of varsity play at Oklahoma, the Sooners never lost a game.

Although he was just 5-9 and 176 pounds, McDonald was extremely durable and missed only three games in his first 11 seasons. He had elusive speed and used his running skills brilliantly after making his catches, finishing his career with an average of 17 yards per catch and 84 touchdowns.

A sure-handed receiver, McDonald had few peers when it came to putting the ball in the end zone. In the years 1958-62, he had 56 touchdown receptions in 63 games, including a 35-yard touchdown reception from quarterback Norm Van Brocklin in the 1960 NFL Championship Game in which the Eagles defeated the Green Bay Packers 17-13.

His career ratio of touchdowns-to-receptions is an impressive 1 in 5.9. He also caught at least one pass in 93 consecutive games. Used primarily as a kickoff and punt-return specialist during his rookie season, McDonald ranked sixth all-time in receptions (495), fourth in yards receiving (8,410) and second in touchdown catches (84) when he retired following the 1968 season.

McDonald, who was born in Roy, New Mexico, had an outstanding season in 1961. Not only did he lead the NFL in reception yardage (1,144) and in touchdowns (13), but in a game against the New York Giants he caught seven passes for 237 yards and two touchdowns, which is still an Eagles’ single-game best.

1960 NFL – Philadelphia Eagles 17, Green Bay Packers 13
McDonald started at right halfback for the Eagles. He caught three passes for a game-high 90 yards and one touchdown. His score, a 35-yard pass play from Norm Van Brocklin in the second quarter, was the Eagles first touchdown of the day.

1968 NFL – Baltimore Colts 34, Cleveland Browns 0
McDonald played for the Browns but did not start. He had no catches.

(At time of his retirement following 1968 season)

Note: McDonald did not set any team records as a member of the Cowboys or Browns. 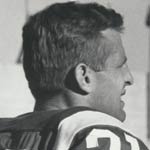 Thank you. What a glorious day and what a glorious weekend. Tommy McDonald is here today for one reason. He followed his heart. He had a passion for the game of football and a desire to be the best and he wouldn’t let anything stand in his way. That’s why he is here today. Not because it was easy. Because for Tommy, it never was. Not because it was destiny because then it wouldn’t have taken this long. Tommy is here because he refused to listen to all the people who told him it was impossible. The high school and college coaches who told him he was too small. The pro teams that ignored him in the 1957 draft. They didn’t realize that inside that jackrabbit body beat the heart of a lion.

Tommy McDonald was a great football player. But he’s much more than that. He’s an inspiration to every young person who’s ever been told he wasn’t big enough or fast enough or good enough. He’s proof that the greatest strength is still the strength of the human will. He’s proof that you don’t have to stand tall to stand for everything that’s good in life as well as athletics. Tommy was five-feet-nine and 172 pounds when he played in the National Football League. Today, he becomes the smallest player enshrined in the Pro Football Hall of Fame (applause). And that makes his accomplishments all the more remarkable – 495 receptions, more than 9,000 total yards – those are imposing numbers. When Tommy retired in 1968, he was second only to the great Don Hutson with 84 touchdown catches.

Tommy averaged one touchdown for every 5.8 receptions, a figure that ranks among the all-time best and eclipses every current receiver including Jerry Rice. But those numbers, compelling as they are, don’t tell the story of Tommy McDonald. You had to see him play to know how special he was. If I had one wish for the NFL today, in this era of billion-dollar TV deals and million-dollar contracts, it would be that more players played the game the way Tommy McDonald played it. That they gave as much, cared as much and loved it as much as he did, we’d all have a lot more fun. Tommy just didn’t play the game, he embraced it. He played the game the we played it as kids at recess, like he was afraid that any second the bell would ring, and he’d have to go back to class. He was the last player in the league not to wear a facemask. He had his jaw broken in the 1959 league opener, but he played the next week with his jaw wired shut and he still scored four touchdowns to beat the New York Giants. That was Tommy McDonald. He was the smallest man on the field, yet, in the fourth quarter with the game on the line there wasn’t a better receiver in all of football. That’s not just my opinion, Norm Van Brocklin himself said it. And if the “Dutchman” were here today to see Tommy join him in the Hall of Fame, I’m sure he’d say, ‘it’s about time.’

Vince Lombardi once paid the Tommy the ultimate compliment. He said, ‘if I had eleven Tommy McDonalds, I’d win a championship every year.’ Tommy scored a touchdown to beat Lombardi’s Packers in the 1960 championship game. Tommy never won another championship after that, but he played like a champion every week for 12 seasons. Growing up in Philadelphia, I saw every game Tommy played as an Eagle. They were the best Sundays of my life, going to Franklin Field, watching number 25 make catches that seemed like something out of a dream. I know there are thousands of people my age in the Philadelphia area who are pro football fans today, because like me, they grew up watching Tommy McDonald.

He was our hero. He is my hero still. Words cannot describe what a thrill it is for me to be a part of his very special day. It is now my great honor to present, at long last, the newest, the smallest and surely the most grateful member of the Pro Football Hall of Fame – Tommy McDonald. (applause).

Oh boy! God almighty, I feel so good. So good. God almighty! Can you hear an amen back here? Yeah, you got that baby. Move over Ronald McDonald. There’s another McDonald in Canton and we’re both gonna sell hamburgers. . .Big Macs and Little Macs.

Do I look excited or do I seem a little like I’ve won the lottery or the jackpot? Yes. Yes. I’m in. I’m going in the Hall of Fame. Yes!

I want to introduce my family and I’m going to start with my little woman – Patty, my wife. In fact, when she found out I was going into the Hall of Fame, she says, ‘we have to go someplace special, I’d like to go someplace that I’ve never been’. And I said ‘some place special, some place you’ve never been? How ‘bout the kitchen’. Oh. Oh. Mr. Tagliabue asked me, he says, ‘why do you take your wife every place that you go?’ I said, ’because she is too ugly to kiss goodbye.’ Just teasing, just teasing, I’m kissing up to her is what I’m doing. . .kissing up to her.

I had four kids and I want to introduce them. Sherry and Rudy – stand up babe – don’t be embarrassed, stand up. Chris and Carol, come on, stand up. Tommy and Kim, come on stand up. I forgot my daughter’s last -- what’s your name, kid? Tish. That’s right. Come on, stand up Tish. Okay kiddo. All right.

My mom isn’t here, she’s 88 years old. She’s in a wheelchair and Mom, I just want you know, you and Dad, I wish every kid in the United States would of had you as a pop and a mom. Because you gave me the love, the support and everything that I needed in life. You made my brother and myself your whole life. So, I want to thank you. My dad, he died in ‘94 but he’s standing right here. In fact, Ray Nitschke’s standing here also. Can you see him? Number 66! Yeah! Right here.

And I want you know. My birthday was July the 26th and I want to celebrate a little bit. (He pulls out a boom box and plays “Stayin Alive” and dances). Staying alive baby! Eat your heart out, yeah!

Thank you. Canton, I love it! (applause)